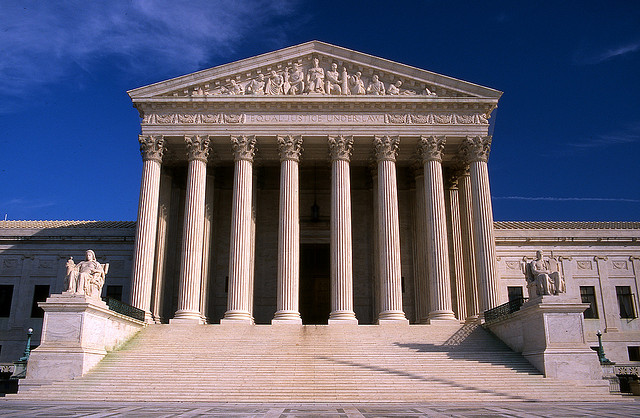 This is the big one! The Supreme Court has just ruled that it’s unconstitutional for individual states to ban same-sex marriage, effectively bringing marriage equality to everyone in America. The news comes just after yesterday’s big decision where they upheld the Affordable Care Act (“Obamacare”) and almost makes it seem as though we’re living in the 21st century!

This is especially great news considering the decision comes just before Pride weekend in New York, so we’ve already got a built in celebration. It was an expectedly close call, though, coming in at a 5-4 vote, according to MSNBC. Justice Anthony Kennedy wrote for the majority opinion,

No union is more profound than marriage, for it embodies the highest ideals of love, fidelity, devotion, sacrifice, and family. In forming a marital union, two people become something greater than once they were. As some of the petitioners in these cases demonstrate, marriage embodies a love that may endure even past death. It would misunderstand these men and women to say they disrespect the idea of marriage. Their plea is that they do respect it, respect it so deeply that they seek to find its fulfillment for themselves. Their hope is not to be condemned to live in loneliness, excluded from one of civilization’s oldest institutions. They ask for equal dignity in the eyes of the law. The Constitution grants them that right.

And you can read the full text of the decision for yourself if you’re hanging on every word—and why wouldn’t you? This is some of the best news we could’ve expected to wake up and read today. Pack it in, everyone. This week has hit its high point; the weekend starts now.

But first, let’s see how everyone is reacting around the ol’ interweb:

Today is a big step in our march toward equality. Gay and lesbian couples now have the right to marry, just like anyone else. #LoveWins

This is coming a long way from 2008 Barack Obama who  waffled on the issue. So glad we’re finally living in a year where the president can openly support marriage equality without fearing that it’ll cost him the job.

Meanwhile, some are… not as enthusiastic:

JUST LOOK AT THIS FOX NEWS GRIMACE. LOOK AT IT. pic.twitter.com/LHrCXDQjhX

But don’t worry. I think everyone who was opposed will find that their own marriage is somehow still perfectly fine despite others gaining equal rights—it’s truly an amazing world we live in.

However, there is something to be said for cautious optimism:

So it’s important to remember that gay marriage’s legality isn’t the end all, be all of LGBT rights. Not by a long shot. Stay vigilant.

It’s true that we still have a ways to go on anti-discrimination policies to make sure those who agree with the losing 4 justices don’t try to make life difficult for anybody else based on their prejudices. Still, while we keep important future steps in mind, let’s allow ourselves some time to celebrate this historic victory.