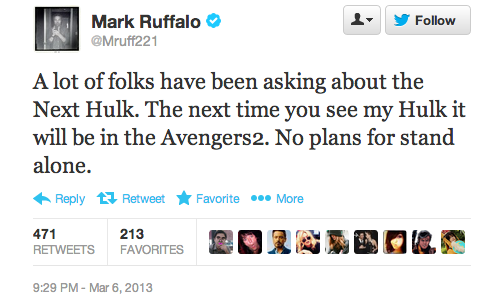 We basically already knew Marvel Entertainment didn’t have anything planned for The Hulk in the next few years anyway but Mark Ruffalo took to Twitter to let the “normal people” know what’s up. “A lot of folks have been asking about the Next Hulk. The next time you see my Hulk it will be in the Avengers2. No plans for stand alone,” he said, also tweeting, “I am not giving up on another stand alone HULK. But it’s not in the works right now. One never knows what the future will bring.” Joss Whedon also recently shot down the Planet Hulk rumors. Not sure where all the Hulk love is coming from at the moment but with Iron Man 3, Thor: The Dark World , Captain America: The Winter Soldier, and Guardians of the Galaxy (and most likely Ant-Man and Doctor Strange as well) on their slate currently, there’s really no room for the green guy. Though we do hope to see Ruffalo pop up in at least one of those…