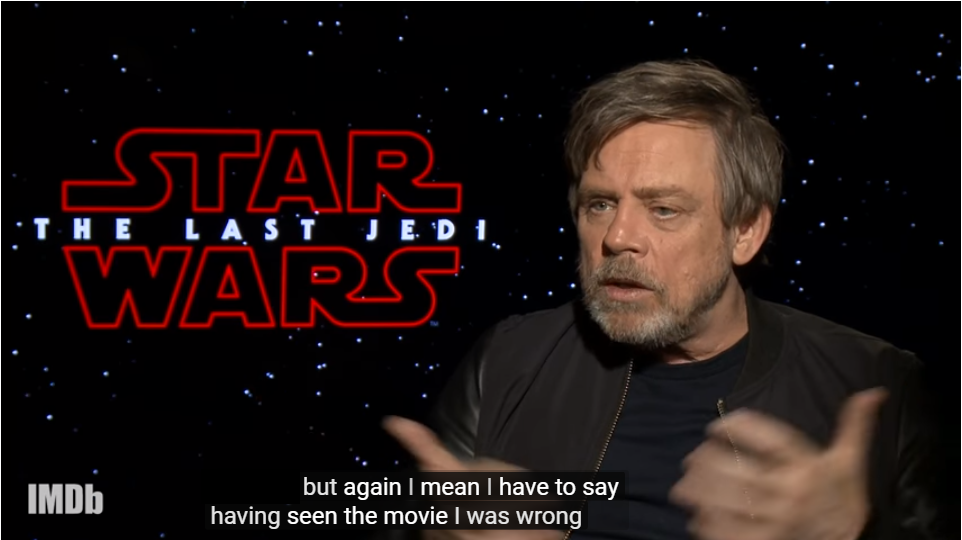 Arguments over the story direction in The Last Jedi continue to rage, as fans debate everything from the Canto Bight subplot to the movie’s use of the Force to the characters’ arcs. As everyone works out their feelings, one of the most divisive topics has been the characterization of Luke Skywalker, the young and optimistic hero of the original trilogy turned bitter old hermit in The Last Jedi. Mark Hamill himself has waded into the debate, calling this version of Luke “not my Luke” and saying “Jedis don’t give up.” As a result, clips from his interviews have been used as ammo in the fandom wars, and so he felt the need to clarify to his ultimate feelings about the movie on Twitter.

“I regret voicing my doubts & insecurities in public,” Hamill tweeted. “Creative differences are a common element of any project but usually remain private. All I wanted was to make [a] good movie. I got more than that — [writer-director Rian Johnson] made an all-time GREAT one! #HumbledHamill.”

I regret voicing my doubts & insecurities in public.Creative differences are a common element of any project but usually remain private. All I wanted was to make good movie. I got more than that- @rianjohnson made an all-time GREAT one! #HumbledHamill https://t.co/8ujJfBuEdV

Previously, Hamill gave multiple interviews in which he expressed his doubts about The Last Jedi‘s vision of Luke. For example, in the below interview with SensaCine, which Teresa covered in a separate piece, he revealed that he and director Rian Johnson argued about Luke’s arc. “I said to Rian, I said ‘Jedis don’t give up.’ I mean, even if [Luke] had a problem, he would maybe take a year to try and regroup, but if he made a mistake he would try and right that wrong, so right there, we had a fundamental difference.”

“But it’s not my story anymore,” Hamill continued, “It’s somebody else’s story, and Rian needed me to be a certain way to make the ending effective … I almost had to think of Luke as another character. Maybe he’s Jake Skywalker, he’s not my Luke Skywalker … Listen, I still haven’t accepted it completely, but it’s only a movie. I hope people like it. I hope they don’t get upset. And I came to really believe that Rian was the exact man that they needed for this job.”

Similarly, in an interview with IMDB, Hamill outlined his issues with the characterization of Luke in The Last Jedi. “I said to [Rian Johnson], ‘I totally disagree with what you think about Luke’,” he shared. “Luke says it’s time for the Jedi to end. Huh? How could this happen? What could’ve happened to this guy, that he would wind up – the most hopeful, optimistic guy, now this bitter old cynic?”

“I’ve had trouble accepting what [Johnson] saw for Luke,” he continued, “but again, I mean, I have to say, having seen the movie, I was wrong … I think being pushed out of your comfort zone is a good thing because if I was just another benevolent Jedi training young padawans, we’ve seen it! … It’s not the Luke from the original trilogy, it’s the Luke from the new generation.”

Fans who were furious with The Last Jedi had been screenshotting and quoting these interviews to justify their own dislike of the film. If Luke Skywalker himself hated the direction, why shouldn’t we? However, this screenshotting was highly selective, because it left out Hamill’s ultimate conclusions about the film. Quotes like “I have to say, having seen the movie, I was wrong” and ” I came to really believe that Rian was the exact man that they needed for this job” place Hamill’s conflicts about Luke in context.

Like all of us, Hamill was upset to imagine the Luke of the original trilogy in such a dark place. But he came to realize how such an arc ultimately served the story of the new generation and led to what he ultimately considered an “all-time GREAT” film. So if you want to quote his conflicts about Luke – conflicts I think we can all empathize with – be sure to quote his conclusions about the film, too.