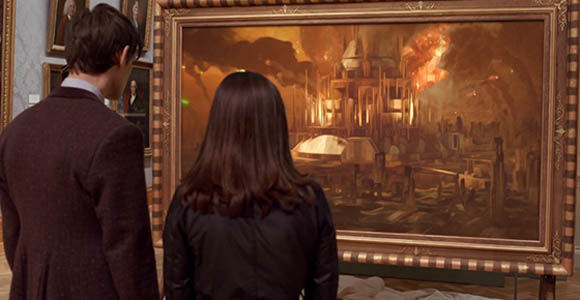 Steven Moffat made some big moves in the Doctor Who 50th anniversary special, The Day of the Doctor. Big moves which included the canon-altering inclusion of the thought-dead Time Lords. While fans had mixed reactions to the idea, it seems frequent Moffat collaborator Mark Gatiss falls squarely on one side of the fence.

The BBC folks were recently doing a tour in Brazil during which, Gatiss was asked if he thought it would be a good idea if Moffat brought back the Time Lords for real. If you caught the 50th anniversary, and the following Christmas special, you’ll remember the Time Lords are maybe-sorta-but-probably-back thanks to the work of all the Doctor’s incarnations. Though we have no idea if or when any of those seeds will actually bloom.

“Every time you go back to Gallifrey, it starts to make the Time Lords a bit too domesticated,” said Gatiss. “I know that’s why Russell T. Davies came up with the whole idea of the Doctor being the last one because eventually if you see them so often they become a bit like a bunch of MPs, whereas if you talk about them as this amazing, powerful force, they’re much more exciting.”

While the implications of the Time Lords being saved was a powerful one for this fan, I’m in agreement with Gatiss on this. He was also asked if he would personally want to write an episode which took place on Gallifrey. Can you guess his answer?

“I don’t know if I would want to do one,” he said, “I think the way the Time Lords were represented in The End of Time and The Day of the Doctor was very exciting because we’re seeing them in a crisis and they’re trying to come up with different ways of saving themselves. But I suppose if the Doctor ever does find Gallifrey again, then we might find out more. Who knows…”

Considering how close Gatiss and Moffat work together, I’m sure he does know but can’t say. Time will tell, I suppose.

(Doctor Who TV via Blastr)