We Need to Talk About Handmaid’s Tale Author Margaret Atwood 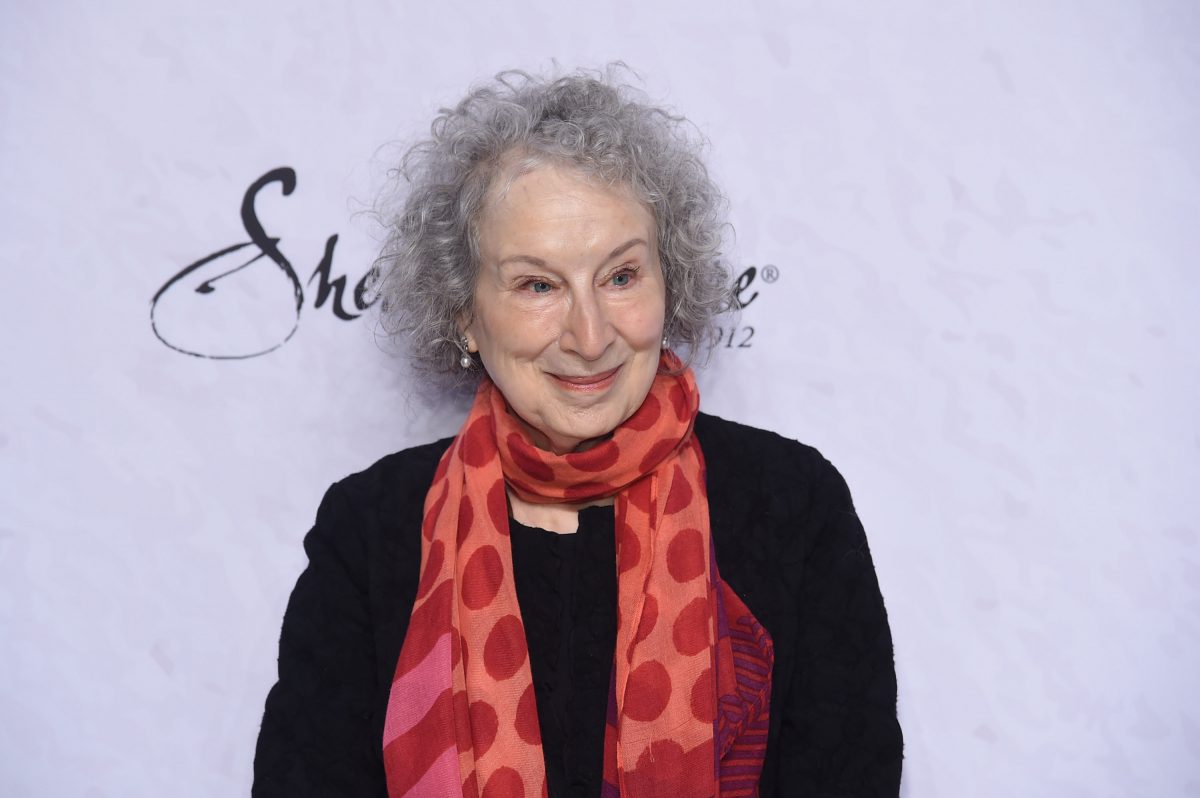 On the eve of Hulu premiering season two of The Handmaid’s Tale, the author of the 1985 novel, Margaret Atwood, was one of five honorees at Variety’s 2018 Power of Women luncheon. In the accompanying interview, Atwood made some fairly wild claims, but also refused to engage with one particular question beyond the surface level.

The question was, “What does feminism mean to you?”

For a woman who penned an entire essay to defend her feminist title, whose body of work is far and wide considered Feminist Canon, she seems loathe to discuss her works or her opinions within this framework. Earlier in the Variety interview, Atwood carefully stepped around a question of whether The Handmaid’s Tale is feminist, stating that there are “50” kinds of feminism and that she always has to ask what “kind” someone means before she answers yes or no.

“I don’t sign blank checks, and I’d like to know what I’m signing up for,” Atwood said. She added later that the term “feminist” is too much of a blanket for viewpoints that may not match.

Although the interviewer initially pushed Atwood to clarify her responses to this line of questioning, once she shallowly explained what feminism means to her, the questions stopped. There’s no followup regarding her opinions on former UBC professor Steven Galloway, who was accused of sexual assault and fired from his position, even after a judge declared him not guilty, after which Atwood signed an open letter supporting him. There’s no followup regarding her comments about the #MeToo movement being a mere “moment” that is a “symptom of a broken legal system.”

There’s no followup regarding Atwood’s rape apology, nor how she neatly steers a question about recent women’s activism into an off-topic conversation about speculative fiction, wherein she blames Star Wars for the terrorist attacks on 9/11.

Unfortunately, this lack of followup isn’t uncommon, and therein lies the problem.

In the wake of #MeToo, as powerful men face reckonings that have been a long time coming for sexually abusing and assaulting those in positions of lesser power (especially women), there has been an uptick in conversation about “separating art from the artist.” Can we still enjoy content produced by people who are, to be frank, absolutely horrible? Many people would say, unequivocally, no. Contributing time or money to these people and their work perpetuates rape culture; by supporting these artists, we are complicit.

An example: for years, Woody Allen has been condemned by those who believe Dylan Farrow’s accusations against him, but big names in Hollywood—including Justin Timberlake, Kristen Stewart, Selena Gomez, Timothee Chalamet, and Emma Stone—continue to work with him. People continue to pay for and see his films. Even as #MeToo and Time’s Up continue to make headlines, people like Allen appear to be untouchable. And he’s not the only one.

Following Amber Heard’s accusations that her ex-husband, Johnny Depp, physically abused her, there was massive outcry for his removal from the Fantastic Beasts franchise, an offshoot of J.K. Rowling’s internationally acclaimed Harry Potter series. Instead, Depp is at the forefront of the second Fantastic Beasts film; his character’s name is in the title, and his face is all over the posters and trailers. Furthermore, Rowling doubled down on her support of his casting, reminding lifelong Potter fans of how oblivious and obtuse she can be.

Harry Potter is a series centered on a victim of abuse reclaiming his life and defeating evil. An accused wife-beater has no place making money off of its legacy, and its author should perhaps listen more closely to her fans.

Because of the pervasiveness of social media, the relationship between media creators and media consumers has changed quite drastically. It’s possible now for audiences to interact with creators through their smartphones, tablets, and computers, to ask questions, send praise, or—perhaps most importantly—criticize the things they think should be better. As fan culture becomes more mainstream, face-to-face interaction is also increasing in frequency and popularity through international fan conventions.

Last year, before Hulu premiered the first season of The Handmaid’s Tale, the cast participated in a panel discussion at the 2017 Tribeca Film Festival. To the audience’s surprise, the cast effectively refused to identify the series as being feminist, stating that just because it’s telling women’s stories, that doesn’t mean it needs that label.

It felt like a cop-out. It still does, and Atwood refusing to call the story feminist just adds fuel to the fire.

In fact, the more Atwood speaks about feminism—or opts against doing so, which is even more telling—the more it seems that The Handmaid’s Tale must exist as a separate entity if we want to consider it Feminist Canon. The Hulu series is effectively a transformative work, in that it expands the universe Atwood created into something much larger, which gives voice and story to all of the women in Gilead who served solely as plot devices in the 1985 novel. That’s wonderful. The series does an excellent job of presenting different women with different stories, whose agency is discovered and weaponized at different points throughout.

It seems difficult to assert that The Handmaid’s Tale is not a feminist work, given how much it focuses on women’s rights and the importance of fighting for them, even following a regime change that puts the lives of women, trans people, and all marginalized groups at great risk. In the current U.S. political climate, this series serves a particular function: social commentary, of course, but also a call to arms.

The Handmaid’s Tale series and its source material are, in this writer’s opinion, impossible to engage with unless it is through a feminist lens. But what do we do with the fact that Atwood and the series cast won’t call it what it so clearly is?

The fact is that the source material was written by a woman who, for all intents and purposes, refuses to engage with questions of feminism or rhetoric about women’s rights in the era of Trump, Pence, and all of their supporters. A woman who—despite her insistence that she is not a rape apologist—refuses to believe survivors and puts her trust in a legal system which posits the rights of white men above all others.

We are quick to discard art created by men who commit atrocities or who are complicit in acts committed by others with whom they work. We expect statements and apologies and charitable donations from people who’ve signed onto projects helmed by these folks, and we feel a certain sense of righteousness when names of powerful men we don’t like appear in headlines accusing them of these acts.

That’s a good thing; choosing not to contribute financially or otherwise to the furthering of, say, a rapist’s career takes us one step closer to unlearning toxic attitudes toward victims of sexual violence. Holding these creators’ feet to the proverbial fire and demanding more of those we put up on pedestals is not only important and good, but utterly necessary.

We must not lose sight of that when looking at the works of women we admire, especially cisgender, heterosexual white women whose Feminist Canon is extremely homogeneous. If we want to engage with The Handmaid’s Tale—whether it’s the Hulu series or the novel—we must also engage with Margaret Atwood’s poorly-expressed sociopolitical opinions, which do manifest themselves in her work, even if that isn’t immediately apparent.

For example, this quote from Atwood’s The Handmaid’s Tale points to her apparent misconception of what defines rape: “I do not say making love, because this is not what he’s doing. Copulating too would be inaccurate, because it would imply two people and only one is involved. Nor does rape cover it: nothing is going on here that I haven’t signed up for. There wasn’t a lot of choice, but there was some, and this is what I chose.”

If both parties don’t enthusiastically consent to sex, then it’s rape. Full stop. And if Atwood wants to claim that believing victims, dismantling rape culture, and forcing predators and abusers to face the same devastation for their actions that their victims have had to face, then we have to grapple with that.

We have to stop letting white women say whatever they want while we engage blindly with their content. Otherwise, the activism inspired by their works just rings hollow.