Or: How the mantis shrimp checks itself before it wrecks itself. 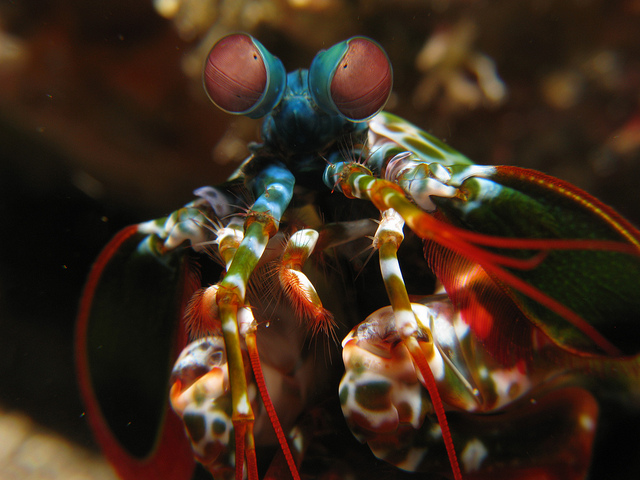 By now, most denizens of the Internet are aware of the mantis shrimp, a creature whose primary method of damaging its prey is a terrifyingly fast strike with its spring loaded appendages. They even come in two flavors: stabby or slammy! However, the mantis shrimp’s strike is so impressively forceful that a mystery has remained as to how it doesn’t destroy its own biological weapons in the process. Now, scientists think they know.

The animal’s “dactyl” club—for the ones that use it to bash open the shells of other sea-dwellers as opposed to spearing them—fires off with quite literally the force of a bullet, much faster than the human eye and leaving a brief, superheated flash in its wake. On the inside of the club, the pattern of chitinous fibers and spaces filled with calcium carbonate and calcium phosphate creates a shock absorber capable of preventing the club from breaking clean on impact, instead allowing any damage to remain localized.

However, that’s not the only armor the club employs, as recently discovered by scientists at the University of California at Riverside. When they took a close up look at the outer coating of the club, they discovered that it, too, employs a shock absorbing structure, which they detailed in a paper published in Advanced Materials. Instead of a corkscrew pattern like that on the inside of the club, the outer layer appears woven in a layered herringbone pattern that the scientists believe allows it to flex just enough on impact that the shrimp’s attack doesn’t backfire.

That’s all well and good for the mantis shrimp, but what does it do for us? The inner workings of the club have already proven useful in designing stronger carbon-fiber materials that Spider-Man would find seriously distracting, and this new revelation about the outer coating could be put to similar use. In fact, the scientists have already 3D-printed a protective helmet based on the design. David Kisailus, a chemical engineer and author on the paper, said in a statement, “The more we learn about this tiny creature and its multi-layered structural designs, the more we realize how much it can help us as we design better planes, cars, sports equipment and armor.”

Good. That armor will come in handy when the mantis shrimp rise up and attempt to take their rightful place as the dominant species on this planet.