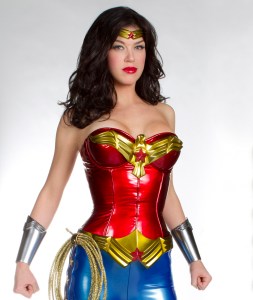 “It’s so important to get her right. She really deserves to be presented on-screen in her full glory. So what I do is I look at the history of how the character has been presented on the big-screen, and the small-screen, and in comic books, and graphic novels. We process it all. Then we kind of put that aside and work out what is right for our film, for the cinematic universe that our director Zack Snyder is putting together. We try and create a Wonder Woman that’s relevant for today’s audiences.” —It’s not much, but this quote from Man of Steel 2 costume designer Michael Wilkinson is the first we’ve heard about Wonder Woman’s first movie outfit (unless you count The Lego Movie, which… plastic minifig clothes). Asked whether it’s realistic for her to be “running around fighting crime in what we typically see her in,” Wilkinson responded: “Absolutely! I mean, you just have to look at the gladiators from ancient Rome, they did their thing in little loin clothes and a shield….It works for Thor, it works for 300, so let’s see what happens.” Granted, Thor and Leonidas have never, to my knowledge, fought in heels, but I love his quick “Pssht, no” response to the implication that superheroines’ costumes might mean they’re less kick-ass than their male counterparts.

Yes, I chose the photo just to mess with you.