Review: The Man From U.N.C.L.E. Manages to Be Both Vibrant and Dull 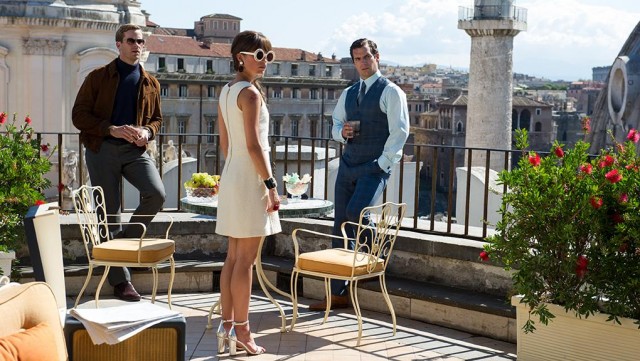 It’s almost impressive for a film to somehow be so packed with style, polish, and color, and still be this boring and disengaging.

There’s no doubt that The Man from U.N.C.L.E. looks great and finds the exact right look to capture the tone and era it is attempting to emulate. This isn’t an authentic look at the ’60s cold war spy era the way something like Tinker Tailor Soldier Spy tried to be; this is Hollywood’s version of that time period—the image captured by Bond and the multitude of TV shows that came out of that time (including the film’s original namesake) or the stylish men in suits who seemed capable of doing anything, so long as they had fantasy technology and a smart, capable gal on their arms … who may or may not be two-timing them with the enemy.

Guy Ritchie has clearly studied the era and looked movies from the time period, along with films that came out of that time but were not exactly spy vs spy thrillers. He borrows liberally and manages to infuse the movie with a look and feeling that’s refreshing and vibrant, although usually seems more like an homage to these types of films rather than a parody of some of the era’s absurdities.

And yet, Richie managed to make a film that could be a key example of style over substance and is a case study in why that’s such a problem when you ask audiences to invest time and money into a feature film. Because as good as the movie looks (and it really does have a great look) and as fresh as the style might seem (especially compared to the too-dark Fantastic Four from last week), there’s just nothing in the characters or narrative that can really hold interest for the near two-hour run time. The story manages to be both ancillary and confusing, and even the action sequences are so over directed that you can’t appreciate the scope of the stunt work.

Why Ritchie would have scenes of break-ins and escapes that are broken up with split screen so the audience never has a chance to get a handle of the scope of these sequences is a mystery. The only two action sequences I really liked happened at the beginning, when I knew where everyone was in relation to everyone else, and at the end when we have a car/motorcycle/car chase on an island where again, I felt I could navigate and therefore sense the suspense of how close or far away characters were from one another.

But this movie often suffers from Richie’s heavy hand—wanting to make ever action sequence so stylized, it avoids tension. Not to mention how nonchalant he is regarding violence, which is always played as a joke to respond to with a sarcastic quip. And a movie this light really can’t use Nazi imagery so liberally without rubbing audiences the wrong way, especially when you cut that scene with stock footage and photos from a real war. The imagery just doesn’t mesh well, which is a pretty consistent flaw of the film. The beautiful locations and bright, colorful mod clothing doesn’t feel integrated into the violent, action sequences. Also, we just had a few films that borrowed from the same playbook with Spy, Kingsmen, and most recently, Mission Impossible, which arguably did this type of movie better.

It doesn’t help that we have a lot of characters to deal with whose motivations we can never really trust because of how much the film wants to leave open for twists. Henry Cavill plays Napoleon Solo (the name is not accidental), a thief serving his sentence by working for the CIA but still living the high life by taking off the top (we never know what “top” this is). Armie Hammer is the KGB spy Illya Kuryakin, who is partnered with him because they don’t want an enemy to have access to nuclear weapons controlled by Victoria (Elizabeth Debicki).

To complete the mission, they need the daughter of an East German scientist, Gaby (Alicia Vikander). As seems appropriate for a ’60s-inspired international thriller, this movie is a smorgasbord of exaggerated accents—some good (Debicki, Hammer), some bad (Swedish actress Vikander’s accent is really inconsistent), and some just bizarre (Brit Jared Harris got laughs during my screening). It’s a bit odd how the international cast is spread out, with barely any actor allowed to use their own accent or nationality.

Henry Cavill, who is really, really good when using his actual English accent, is wooden yet again as an American, this time sounding a bit too much like William Shatner. Saddled with a role that seems like a Robert Downey Jr. type, Cavill has lines that are supposed to be jokes but he never land. And Solo’s swagger feels so fake that I spent a good chunk of the movie expecting his “act” to be part of the character.

However, this movie is the first time I’ve really seen the appeal of Armie Hammer as a leading man. It may be that Guy Ritchie has discovered the same quality in him as established past discovery Jason Statham: the more serious his character, the funnier and more appealing he is on-screen as an actor.

He also has a generally good on-screen rapport with Alicia Vikander, even though there are a few unpleasant scenes that are murky due to the sexual politics they’re playing and “tongue in cheek” innuendo the movie takes a bit too much delight in. Vikander, who was so good in Ex Machina earlier this year, has a tough role, because she is occasionally infantilized by her male counterparts and asked to play up her youth a bit too much.

But midway through the movie, it actually finds a rhythm, and the more they let her do and define her character, the better she is and the more interest I have in the character—and the more invested I was willing to be in her authentic chemistry with Hammer. Debicki is probably given the least to do of the four leads, and as she did with her role of Jordan in The Great Gatsby, she makes more of the role than is written, but is still at a disadvantage; especially her scenes with Cavill, which just don’t have the crackling, witty, rapid fire dialogue you want to see in this kind of movie.

The dialogue is the movie’s biggest problem. The overwhelming reaction I had immediately after leaving was, “Guy Ritchie thinks his writing is much funnier than it is.” The majority of comedic dialogue is delivered by Cavill’s Solo, and the actors and Ritchie seem to be leaving space for the audience to laugh. And they didn’t.

I don’t mean I didn’t laugh at a lot of these jokes; I mean a full theater didn’t laugh at lines Ritchie intended to be jokes, and because of the way he leaves room for jokes, there are moments when it feels like you’re watching a sitcom without a laugh track. For a director who loves quick editing, the ego to leave a gap for laughs is somewhat baffling, and too often slows the entire movie down. We also have yet another film with the nerve to assume this will be the setup for franchise reboot.

I know we’re in the era of the franchise film, but this film has no reason to sacrifice a strong ending in favor of not just leaving the door cracked for possible sequels, but wide open.