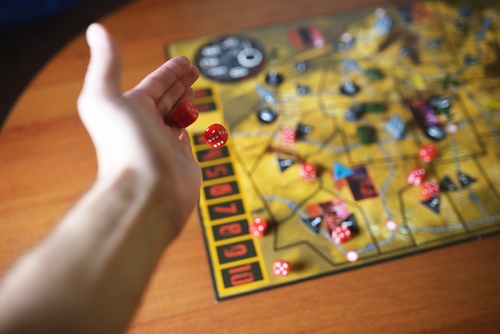 In 2003, I was hired as the second woman ever to work for Games Workshop Canada’s retail division. It was a short but very formative stint, a summer job that fostered my deep passion for the tabletop community—and colored my view of it.

I went through the training, learning about the company’s mission (total world domination), the unadvertised policy on shoplifting (prosecute to the fullest extent of the law) and every day lived the ten commandments of retail (ironically enough, modelled after the shopping experience of UK bodycare company The Body Shop.)

Despite all this training, I was unprepared to handle the stalking and harassment I sustained that summer from a particularly unrelentless customer. He would follow me and (without invitation) join me on my lunch break as I sat in the mall food court, follow me to my car when I was done my shift, and inquire when I was working next.

His obsession culminated into him coming into the store one day, and pulling out a camcorder with which he used to record me as I ran a pair of kids through an intro game of Warhammer 40K. The whole thing.

Discombobulated, I hid in the back room, explained to a coworker what was happening, and waited until he came back to tell me it was safe.

I take from that incident a recognition that there are blind spots in our community. If a multi-million dollar, publicly traded company doesn’t have a sexual harassment policy in their training handbook for staff, what’s the chance my Friendly Local Game Store does? If my presence, as a queer, female, visible minority in a gaming convention is remarkable, what’s the chance that the organizers were considering people like me would be in attendance, and would have policies to protect me? Further, what’s the chance that other gamers have encountered gamers like me, and have an understanding of what my day-to-day life is like, and why gaming as an escape is so important to me? It’s not anyone’s fault, but rather a byproduct of growing a diversifying community.

When I share my experiences like this one, the decent gamers (who make up the vast majority of our community), ask, “What can we do to address this? How do we make this better? How can we make it safer?”

It is for them, and for the many who feel similarly hearing stories like mine, that I write this. This post isn’t about airing grievances: It’s a call to action, a call for vigilance, and a call for support. So here are ways we can make the tabletop a safer space.

Normalize the presence of women, people of color, and other minorities in games and in gaming spaces. We’re mired in a culture that depicts women as prizes, refusal or resistance of sexual advances as foreplay, and skin color or markations of culture (Latinx, Muslim, etc.) as identifiers of “the enemy” by even those in the highest public office.

That’s why depictions in games matter. If the games we play perpetuate sexist, racist and homophobic tropes, that’s not actually helping to fix the problem. For those in the business of producing games, that means being mindful and thoughtful of how you depict all people in your games. Do you have women who exist only as support or prizes? Are non-whites present in your game? If they are, are they heroic agents or are they only depicted in enemy roles? If your game has relationship mechanics, are the only ones available normalizing heterosexual ones? Think about your games and how they may be perpetuating harmful tropes. (Yes, beloved DMs and GMs, I’m speaking to you too.)

For those involved in facilitating gaming and discussions around gaming, it means including voices in discussions about gaming that include these voices, and not just in the panels talking about these demographics. It’s great to have a “Women in Gaming” panel at your convention, but did you make an effort to include women in panels that aren’t specifically about women?

And if you’re a gamer, engage with gamers who would be minorities in the gaming community as gamers, not as minorities. I’m always elated to talk about my favorite games or 40K army, and less so about my ethnic heritage. Sure, I’m happy to talk about some awesome depictions of women in gaming, not so much whether or not I’m single or if I have a female relative I could introduce you to. If you witness that kind of behavior, intervene and say, “Dude, how does that matter? Let’s play some games.” It helps remind everyone within earshot that we’re all gamers.

Create and enforce policies around bullying and harassment, and empower the community you serve to enforce them. Harassment on the basis of gender, orientation, religion and race happen everywhere, but in gaming spaces, we have the unique ability to address it. If you administrate a gaming space (whether that’s a store, a convention, a publisher booth or a gaming table), you are in a place to not only create policy that addresses issues of harassment, but also to empower all those within that space to help enforce it. That means you may have to educate those people you’re empowering to identify harassment, and give them a means to address it (like a clear way to report it to you.)

Addressing harassment isn’t remotely like a criminal trial. If you articulate clearly the expectations of behavior within your space and someone doesn’t adhere to them, you can remove them. If a business can terminate an individual for not being “the right fit,” so too can you. Consider it a preemptive measure that prevents something from escalating to the point where it may require the involvement of legal authorities. Nobody wants that on their conscience.

Recognize that treating everyone equitably isn’t just treating everyone the same. Just because everyone has the same set of rules doesn’t mean we’re all playing on a level playing field. If you’re facilitating late-night gaming, do you have people who can safely escort gamers to their cars at the end of the night? Not all gamers need that support, but those that do, really do.

Similarly, having a zero-tolerance policy for sexist, racist, homophobic or ableist slurs doesn’t affect or benefit everyone equally, but it certainly does make the table a lot more equal.

There are things, small and big that can be done to help make the tabletop gaming community a safer place for all. The point isn’t to appeal to women, people of color, queer individuals or any other specific demographic. Those people are already involved in gaming, but rather to make the public space of gaming one where their presence is a welcome and integral fabric to the community which we continue to build.

Whether you’re a game designer, artist or publisher; a store owner or event organizer; or individual gamer, you have the power to shape the culture and community in which you’re involved. Use it wisely.

Teri Litorco is an activist gamer, taking action where she can and calling others to act as well. She’s a regular contributor to Geek & Sundry, author of The Civilized Guide to Tabletop Gaming (a survival guide for tabletop gamers), co-creator of The Board Dames, and a YouTuber. She can be found fangirling about games and geekery on Facebook, Twitter, and Instagram.