Maisie Williams Wants Us to Reconsider "Feminist" | The Mary Sue

Maisie Williams Wants Us to Reconsider Our Focus on the F-Word: Feminist

"I don't care what he is, but I need to hold him accountable for what he did." - Jay Smooth 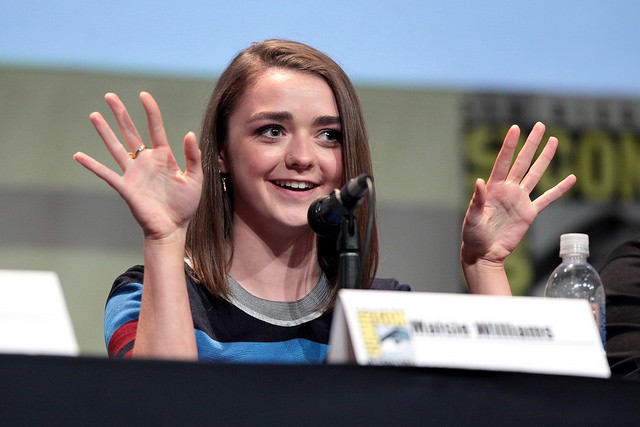 Maisie Williams had some interesting thoughts to contribute in a recent interview regarding use of the word “feminist.” Perhaps that word is a distraction from the real problem.

In an interview with Entertainment Weekly, Williams brings up the idea that perhaps we shouldn’t always put the onus on women to assert whether or not they’re feminists and then praise or attack them based on their answer. Perhaps instead, we should be asking people whether or not they are sexist. She says:

I got asked in one of my first interviews: “Is Arya a feminist?” I didn’t even know what a feminist was […] And then someone explained it to me. And I remember thinking, “Isn’t that just like everyone?” And then I realized everyone is not a feminist, unfortunately. But I also feel like we should stop calling feminists “feminists” and just start calling people who aren’t feminist “sexist” – and then everyone else is just a human. You are either a normal person or a sexist. People get a label when they’re bad. Because it works the other way, as well.

I think Williams brings forth an excellent point. How relevant should whether or not someone identifies as a feminist actually be?

Before we have that conversation, I think we should separate out what Williams isn’t talking about: whether or not the word feminist itself is a label we should or shouldn’t apply. That’s not what she’s disputing. There are plenty of women who don’t want to identify as feminists for any number of legitimate reasons: they feel that the negative connotations of the word distract from the true purpose of the word, or they identify themselves as “womanist” in order to express and embrace a more intersectional feminism. And all of that is another conversation.

What Williams is discussing here is that the label one uses to assert their support of gender equality doesn’t deserve the kind of focus it gets. Instead, we should be pointing out sexist views and sexist people by using the actually negative word, sexist.

The way I see it, it’s the difference between teaching people how to prevent rape versus teaching people not to rape. After all, there’s no label for someone who “isn’t racist.” They’re either racist, or they’re not racist. I mean, sure we can call them “tolerant,” but that’s not race-specific. I have no idea why there isn’t a word for someone who is against other forms of oppression. Why are people who support gender equality expected to single themselves out in this way? Is that itself due to sexism? Perhaps the word “feminism” is more useful as a name for a movement than the word “feminist” is as a label for an individual.

For an example, Pajiba had some fun illustrating what this might look like in a hypothetical conversation with Jeremy Renner based on previous statements and interviews he’s given. Perhaps, rather than calling out people who don’t identify as feminists, we should instead focus our attention on calling out people’s sexism. I don’t care what you call yourself as you engage in feminism. I do care if you’re a sexist and/or regularly engage in sexist actions. It’s a subtle shift, but an important one.

Taking this further, perhaps we should lay off the individual labels altogether. After all, labeling someone a sexist (or a racist, or anything else) is 1) not necessarily provable, and 2) does nothing other than feel really good while you’re saying it and pissing off those on the receiving end. That’s the extent of the benefit. Calling an action sexist allows you to talk about cause and effect; about how what someone did or said affects other people in a negative way. Actions can be stopped, regardless of how a person feels about oppressed communities deep down inside. That’s the conversation you want to be having.

I constantly post this video to illustrate this point, because I think that Jay Smooth does an amazing job of illustrating the point succinctly. So, here’s the video again:

I’d love to hear what all of you think about this in the comments below. Is a pro-gender-equality label for individuals important? Why or why not?