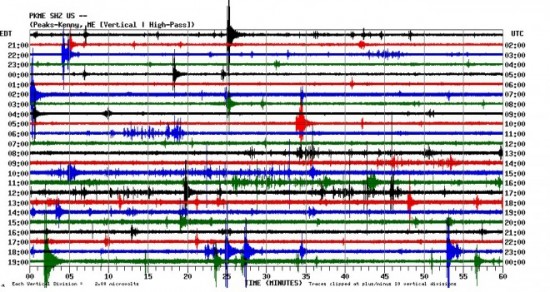 During the first week of May, something very unusual happened in coastal Maine. Normally seismically boring, Maine experienced about a dozen tiny earthquakes that rippled across the region. In their wake, the cracking earth sounded like explosions or gunshots in the distance.

Far from being the precursor to an impending disaster, these pint-sized earthquakes (all under 2 on the Richter scale) are the result of the massive Laurentide ice sheet that once covered huge swathes of North America during the last ice age. Under the weight of all that ice, over a mile thick,  the crust of the earth was squished down. Some places, as much as 500 feet. Since the ice sheet receded some 14, 000 years ago, the ground has been springing back up.

Earthquakes and other seismic fallout from eons of icey repression are not uncommon in Maine, but a cluster of a dozen is rather unusual for the region. It’s a surprising reminder that although we may think of the landscape as unchanging and eternal, it is constantly in flux and responding to forces that stretch far beyond our lifetimes.

(image and story via Wired)