That Time Mae Jemison, Pioneering Astronaut, Was on Star Trek: The Next Generation 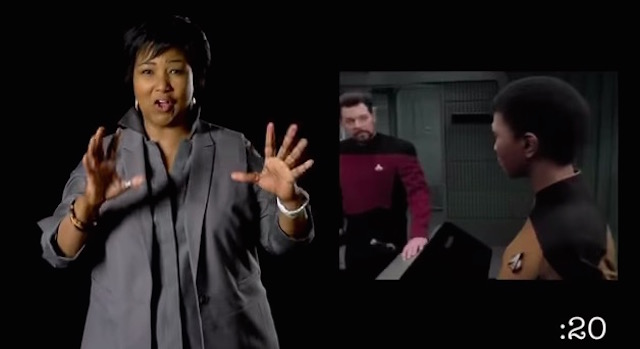 You remember those old kids’ books that had numbered reading levels told the really truncated life stories of important historical figures? Well, my grade school’s after-care program had quite a few of those, and I went through them over and over again.

One of these books was Great Black Heroes: Five Black Explorers. Besides polar explorer Matthew Henson and Jean du Sable, the founder of Chicago, it also introduced me to Mae Jemison, the first African-American woman in space. And Jemison is all kinds of great. Besides being the first woman of color in space, Jemison was an outstanding doctor with the Peace Corps before she even joined NASA and, in addition to a professorship at Cornell, is currently the head of the 100 Year Starship project.

Oh yeah, and she’s also the first ever astronaut to appear in a Star Trek production.

Like a lot of professional scientists and astronauts, Jemison grew up a huge Star Trek fan. Memory Alpha, the official Trek wiki, has an anecdote that while in space, Jemison would apparently begin each shift by telling Mission Control, “Hailing frequencies are open.”

So in 1993 (the same year Jemison left NASA), LeVar Burton—the Internet’s favorite English teacher—found out she was a huge Trek fan while directing his first episode of The Next Generation and asked her if she’d be willing to appear on the show. Without hesitation, Jemison said yes. Thus if you watch the Season 6 TNG episode “Second Chances”—which Trekkies might remember as “The One Where Riker Finds His Eerily Identical Double”—you’ll see Jemison as transporter operator Lt. Palmer. (I can’t find the actual clip, but here’s a fun NOVA clip of Jemison talking about the experience.)

It’s only a cameo; it’s not like she swoops in and steals Picard’s heart or something (although that would’ve been fun). Still, it’s pretty cool to think the first actual astronaut to be in a Trek production was so thrilled at just being a part of the Enterprise-D crew.

Also, Jemison got to meet her own hero (and one of NASA’s most effective ambassadors), Nichelle Nichols, who visited her on the set. Given how iconic Nichols is in Trek—and in general pop culture—that must’ve been amazing.
(If you’re wondering, the next astronauts to appear in a Trek production got stuck with being on the Enterprise finale. Poor bastards.)

Tom Speelman is a staff writer and reviewer—primarily of comics—for Another Castle, and is an accomplished academic, having presented at the Comics Arts Conference at Comic-Con as well as being published in The Baker Street Journal. Currently finishing up degrees in Literature and Writing at Calvin College, he rants about comics, anime, Star Trek, television and Transformers @tomtificate on Twitter and blogs about all those and more at his personal blog, tomtificate.