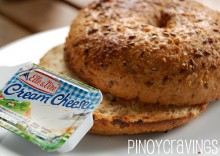 An English professor named Lynne Rosenthal claims to have been forcibly ejected from a Starbucks yesterday when a barista refused to place her order because she refused to use Starbucks’ ordering protocol. The usual populist complaint against Starbucks concerns the chain’s deliberately pretentious sizing: Rather than ‘small,’ ‘medium,’ and ‘large,’ they’ve got ‘tall,’ ‘grande,’ and ‘venti.’ (And, God willing one day, the 32-ounce Trenta, which is currently being tested in some markets.)

But while the New York Post says that Rosenthal “refus[es] to employ the chain’s stilted lexicon — balking at ordering a ‘tall’ or a ‘venti’ from the menu or specifying ‘no whip,'” and “insists on making a pest of herself by ordering a “small” or “large” cup of joe,” her complaint this time was a little more arcane, and concerned bagels:

Rosenthal, who is in her early 60s, asked for a toasted multigrain bagel — and became enraged when the barista at the franchise, on Columbus Avenue at 86th Street, followed up by inquiring, “Do you want butter or cheese?”

“I just wanted a multigrain bagel,” Rosenthal told The Post. “I refused to say ‘without butter or cheese.’ When you go to Burger King, you don’t have to list the six things you don’t want.

“Linguistically, it’s stupid, and I’m a stickler for correct English.”

So after asking the obvious question ‘why was she ordering a bagel at Starbucks’: What was her linguistic beef, exactly? There’s nothing grammatically wrong with the question “Do you want butter or cheese?” as asked about a multigrain bagel; however, we’re guessing that Rosenthal’s problem was one of semantics, that field of linguistics that explores the relationship between words and the things they stand for.

Is this splitting hairs? Was Rosenthal justified in her protest, or did she go too far? Possibly relevant: Another Starbucks employee claimed that she called the barista an “asshole.”