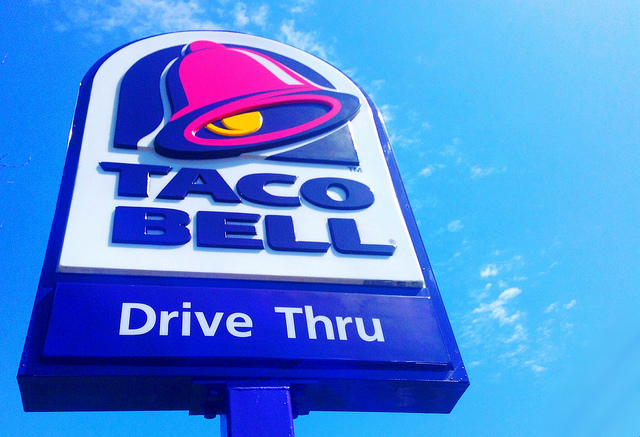 Lyft is (finally) partnering with Taco Bell, giving riders on their ridesharing platform the option to make a pit stop at any Taco Bell along their route between the hours of 9 PM and 2 AM. It’s genius, really, given how many people have made such requests of their Lyft drivers on late alcohol-soaked nights out with friends and loved ones where they find they need a bit of grease and carbs to soak up some of the aforementioned danger-sauce (hello this is literally me, I am writing about me if you could not tell, hello).

They’re pretty unashamed and straight up with the demographic they’re targeting here, too. I mean, look at the hours it’s operating—again, 9 PM to 2 AM—those are solid Taco Bell “Fourthmeal” hours. Also, those are the hours where possible mistakes and regrets appear more and more justifiable and reasonable, according to a totally real study that I didn’t just make up to make myself feel better.

Okay, yeah. Jokes aside, it’s a really smart move. This cuts out many delivery middlepeople like Postmates or UberEats, both of which cater to (ha) folks who might be looking for a later-night fast food fix but might not have a car to hit those drive-thru only hours. Places like Door Dash or Caviar mostly focus on delivering food from restaurants or takeout places—not so much fast food. But sometimes you’re just craving a Doritos Locos taco to chase that regrettable shot of tequila (hey, it was National Tequila Day yesterday, okay, gosh) before heading home.

Speaking of, Taco Bell and Lyft are planning some extra goodies as part of their partnership, according to Business Insider: free Doritos Locos tacos, a “custom in-car menu,” and a “taco-themed car.” As you may already know, both Lyft and Uber are big on the themed car events, so why shouldn’t this expand to include a partnership with Taco heckin’ Bell?

The bad news is that this is only open in one select market for now: Orange County, California. It will run as a test between July 27th and 29th and August 3rd and 5th, preparing for eventual expansion to the rest of the country sometime in 2018. So until then, you and I and the rest of us non-Southern Californian plebes will have to find a way to satisfy our own Fourthmeal cravings all on our lonesome.

Hey, buddy, Lyft driver pal, friend, person, have you eaten yet? Because I just had a really good idea …