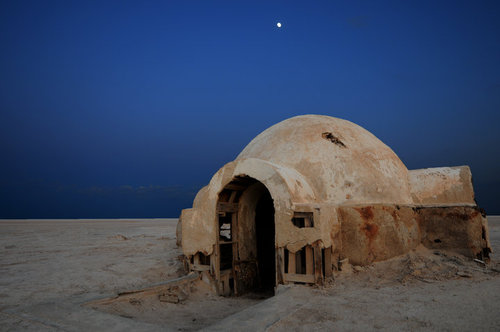 We never would have guessed that there was an organization out there raising money to travel to Tunisia to restore the set of the Lars Homestead, the tiny adobe iglo that marked the entrance to the farmland home of Lars and Beru Owen, adoptive parents of Luke Skywalker. But it exists.

And even more surprisingly, the Save the Lars Homestead Project is more than two thirds of the way to its $10,000 goal.

The organization was founded by members of a group of diverse Star Wars fans who pooled their money to make the pilgrimage of a nerd lifetime: to the set locations of Mos Eisley, Obi Wan Kenobi’s hermitage, and the Lars Homestead from Star Wars (and in addition, the locations of the “Cairo” action sequences from Indiana Jones and The Raiders of the Lost Ark).

Many of these places were actual buildings and town streets, Obi Wan’s house, for example, is a fisherman’s hut, and the interior of Luke’s house is actually a hotel. But the Owen igloo, outside of which Luke Skywalker moodily put one foot on a rock while watching the double sunset, was built for the movie.  Over time, the first set decayed under the constant friction of Tunisia’s climate, but another one was built in order to film the prequel movies at the same location.

And frankly, we’re lucky that George Lucas even built a set for it, instead of just another green cardboard box.

Mark Cox, Terry Cooper, Robert Cunningham and Tour Guide Mark Dermul… plan to return to Tunisia with the required tools, plaster and permits to restore this iconic movie location to its full glory before the desert climate destroys it completely.

As a fan who would really have liked it if some of the sets from The Lord of the Rings movies had been preserved, just as one more extra reason to visit New Zealand one day, I say: may the force be with them.

(via The Geek Arts.)