The “Swear Jar” on Luke Cage Was Inspired By Prince, Who the Showrunner Wanted as Guest Star 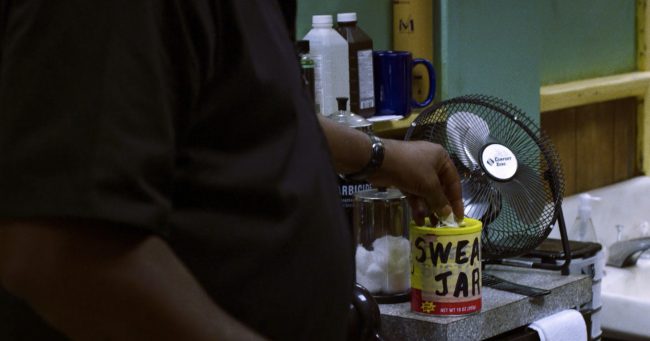 It’s hardly even a Luke Cage spoiler to say that Pop’s Barber Shop has a swear jar. After all, Pop swears and has to drop a dollar into his own jar within the very first minute of the first episode, thereby establishing a long-running, heartwarming gag that lasts through all future episodes. (By the way, that’s probably how the show’s writers got away with Luke saying the character’s iconic swear-free catchphrase, “Sweet Christmas,” without having it come across as corny–which it still does, but at least we know why he’s not swearing like the rest of us would.)

Anyway, did you know that the swear jar was inspired by the late great musician Prince, who himself kept a similar swear jar at his home late in life? Luke Cage showrunner Cheo Hodari Coker cited the musical legend as his reasoning for including the jar, and mentioned that he included it in the early episodes in the hopes that the artist would be willing to make a guest appearance on his show:

The “Swear Jar” was for Prince. I was going to show him the first two episodes and convince him to play in episode 13.

Episode 13 is the final episode of Luke Cage, of course–and there would have been plenty of opportunities for Prince to appear on the show even before that finale, what with all of the diegetic music that happens in the Harlem’s Paradise nightclub. Lots of other excellent musicians do get chances to perform on the show, such as Method Man, famously.

Alas, it was not to be, what with Prince passing away last April of this year. Luke Cage actually concluded filming in March of 2016, but it’s possible that the musical performances were added later to accommodate for scheduling. In any case, Coker ended up choosing a different musical act for the final episode, and his tweet explaining the decision is slightly spoiler-y, so be warned!

Cheo Hodari Coker is still clearly a huge Prince fan, and has spoken about that before. At San Diego Comic Con last year, he compared the release format of Luke Cage (and the new culture of watching TV all in one go) to the way that fans used to experience albums: “I wanted the 13 episodes to feel like an album. Like when Prince put an album, you would shut things out and listen to the whole thing. But now, with TV, you binge watch. This show is made to binge. The music helps, but it is all about the pace. Man, it’s great.”

Given that the internet’s enjoyment of music revolves almost entirely around singles now, as opposed to albums, it’s refreshing to see Luke Cage take a more old school approach to its music; the musicians behind the show have even compared each episode to an album in and of itself, since they wrote original songs for every pivotal moment of the story.

If Prince had gotten to see the show, it’s entirely possible that he would have respected their efforts. We’ll never know–but at least the swear jar lives on in the show as a tribute to his memory.

(via io9, image via Netflix screencap)