Review: Luke Cage Fights for the Soul of Harlem in a Slow but Strong Season Two 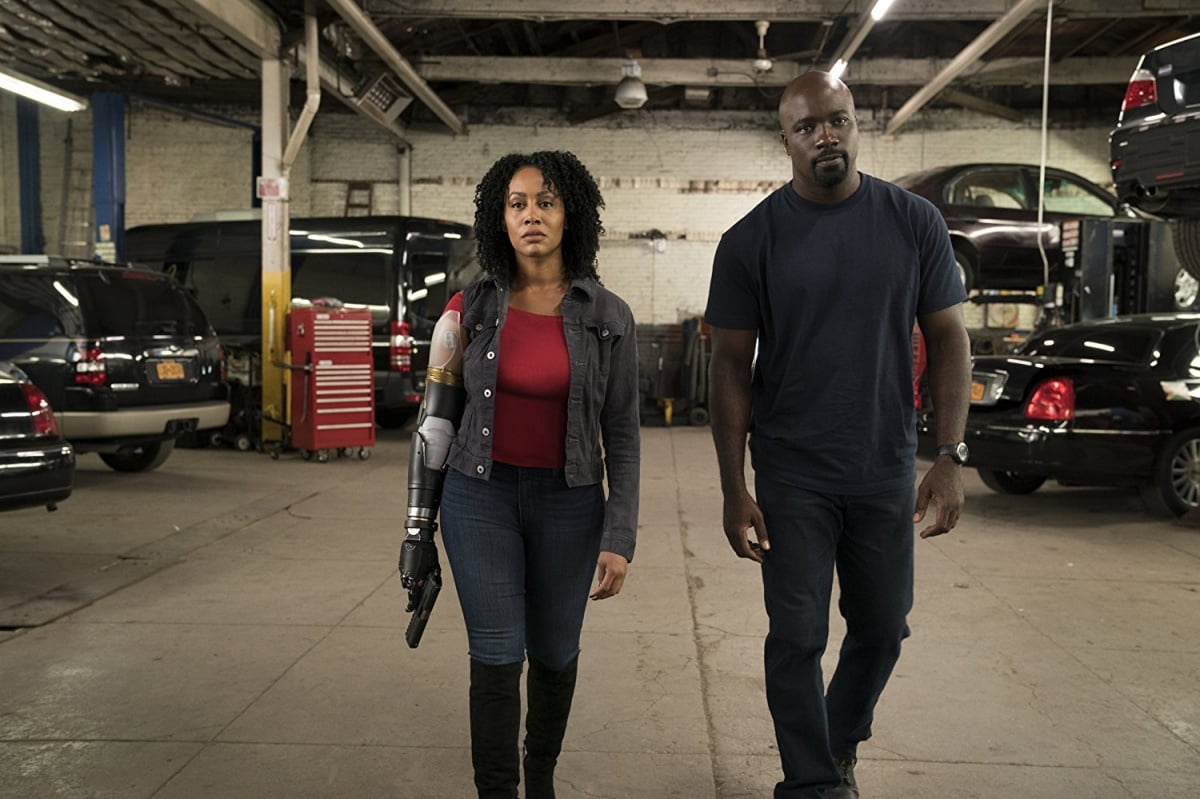 Family, forgiveness, and revenge are the themes that run throughout the second season of Netflix’s Luke Cage as it brings our bulletproof hero back onto the screen to face old demons, new threats, and his father issues.

Season two finds our bulletproof superhero, Luke Cage (Mike Colter) getting drawn into the middle of a gangster Hatfield and McCoy style drama between the Harlem based Stokes family, led by Mariah Dillard (Alfre Woodard) and the Jamaican McIver family, now led by John McIver aka Bushmaster (Mustafa Shakir). Armed with heightened abilities, a steel will, and obeah, Bushmaster is determined to reclaim the legacy he was robbed up by the Stokes family, which means turning Harlem upside down.

In many ways, the second season of Luke Cage is an improvement upon the first season, which started of strong but fell short due to the loss of Mahershala Ali’s Cottonmouth in favor of  Mr. “Nigga, I am your brother” Diamondback. With the double dragons of Bushmaster and Mariah Dillard, Luke actually has enemies he can’t just punch away and who are clever enough to keep Power Man on his toes.

Still, the problems of the series exist within the fabric of the Netflix Marvel shows as a whole. In order to sustain 13 hours, the idiot ball must be dropped and dropped often.

First, there is the issue that Luke Cage and Misty Knight are terrible at saving people or protecting people from anything for most of the series. While all the violence escalated every episode waffles between “let’s just kill her” and “let’s do this the right way.” The morality game of “we don’t kill” in superhero shows is exhausting. The amount of people who die because Luke and Misty step in seems unbalanced, especially since so often they are wrong or too cocky or make foolish mistakes that allow the series to go on for 13 episodes.

When it comes to Luke, it’s like all the things I talked about in my article about respectability were addressed. Luke’s anger, and really the black man’s anger specifically, is really analyzed in this season. Luke wants to be the good guy, do the right thing and protect his community but doing that means holding tight onto his own rage even when it makes him explode against the people closest to him.

The show plays with Luke Cage “the angry black man” in small moments, but it never fully commits to the examination. It plays with toxic masculinity in an early fight with Claire, that escalates to show a dark look of what Luke’s powers could be turned dark. But we the audience see it from Luke’s side. We know he would never hurt Claire, but the self-examination never comes. It is washed away as he reconnects with his father, James Lucas, played by the late Reg E. Cathey.

Still, the biggest problem with Luke is a lack of emotional empathy for his villains, which, in a sense, can’t exist because he isn’t privy to their backstories, but he likes to imagine a stern “don’t this anymore” can solve decades of a blood feud. For a man who talks about the black man’s right to be angry, he doesn’t seem to connect with that in other men. He can’t see the long game, only what is right in front of him. Yet, I feel like this season really tested Luke on what it means to be a hero and how to be a hero. It puts him in a space where I look forward to seeing his journey in future seasons.

Misty especially suffers because while she is a great character, with some amazing scenes, especially in the early half, this season proves something to me that first occurred during the previous season: Misty is not a good police officer.

Misty seems to only half-believe in the system and cuts corners and, in one of my least favorite serious cop show tropes, uses her “gut” as proof when she’s got nothing else. Now here is the thing, I get it, the “gut” is shorthand to show us that Misty has great instincts, but the problem is that is dangerous. A cop should base their conclusion based on evidence if they are going to be a cop and if they have a feeling they should investigate, but Misty doesn’t investigate, her analysis stops there. All of this would be fine if, like her comic counterpart, she was not a cop. But she is and therefore she should act like one because if she were a white person the way she treats perpetrators would be seen as sus.

There is one scene in which she goes to search around someone’s place of business without a warrant and when the person points that out, she uses that as a sign of guilt. Except … that’s just the law. 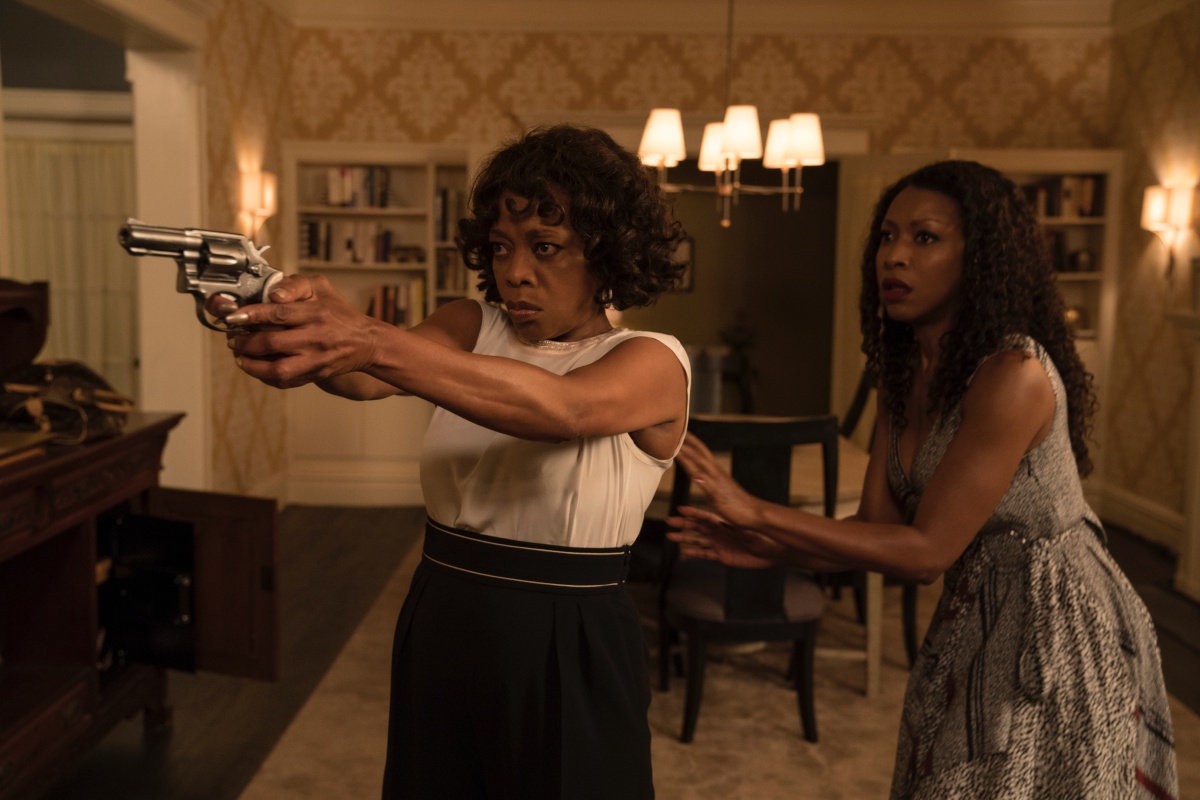 Thankfully, in Bushmaster and Mariah, I believe Luke Cage has two of the most interesting villains in it’s Netflix MCU world. Fisk was great, but he’s been put on a boat, for now when he makes his return then we can talk. Killgrave was a piece of shit and effective, but very little about him was compelling. The Hand … exists.

Bushmaster’s quest for revenge may be bloody and macabre, but the show takes time to show his nobility, his tragic origins and make space to examine the fact that he is what he was made to be. Where Luke holds in his anger, Bushmaster lets it out. They are two sides of the same coin, except where Luke is burdened by a desire to be good, Bushmaster knows the world is not as simple as “right and wrong.”

On a personal level, all the Jamaican culture of the season just made me laugh and smile throughout. Very rarely do you see such authenticity of West Indian identity on television like that and it made me feel so uplifted. It also made me kinda-sorta root for Bushmaster, not gonna lie. He has an amazing speech in the latter half of the season that filled me with so much pride for my mother’s homeland that I was rooting for him.

Mariah’s character has gotten to reach heights of villainy that rival Fisk in season one of Daredevil. There is a need for great black villains and Mariah is filling that void. She reminds me of an evil Miss Celie (The Color Purple), a dark-skinned black woman making her way in the world through her own means. Within Mariah, there is a desire to do right by her community, even if it is by nefarious ways and that is what makes her the other great foil to both Cage and Knight. Mariah is actually smart, clever and astute. Yes, she is failable, but she also is very aware of the world she lives in. Every misstep makes her stronger and only makes our heroes look foolish. She was truly the MVP of this season.

Overall, this season develops characters Shades and Comanche, Mariah’s daughter Tilda who is based on the character of Nightshade in the comics, and it even makes time for a fun Power Man and Iron Fist moment. I’m disappointed in Claire’s exit from the show, which was hinted at with Rosario Dawson saying she was done, but it was handled the best way it could be. There is a lot good in this second season and as far as Netflix MCU shows go, this may be the best sophomore season we’ve gotten. Still, they need to work on figuring out pacing, for a show only 13-episodes long, the first five shouldn’t seem like such a chore, even if you do stick the landing.