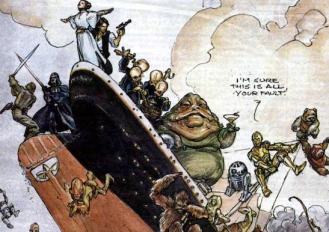 In 1998, Titanic topped Star Wars as the #1 box office movie of all time. In congratulations, George Lucas bought this full-page ad in Variety, in which the Star Wars crew jumps out of the sinking ship and into the ocean of second place. (Here’s the fully-sized ad.)

Apparently, it is a Hollywood tradition for directors who have their #1 records smashed to take out full page ads congratulating the new record-holders. The good people of Reddit have dug up two more such ads: When Star Wars broke Jaws‘ record, Steven Spielberg congratulated George Lucas by taking out a full-page ad with a picture of R2-D2 snagging Jaws on a fishing line.

Thereafter, E.T. beat Star Wars and held the record for a while; we can’t find the ad Lucas bought congratulating Spielberg for that, but it exists. But Star Wars Special Edition reclaimed #1 in 1997. The result? Another full-page ad in which E.T. puts a crown on R2’s head.

(h/t Neatorama, with a special thanks to Redditors IAmARealDoctor and Toefer)