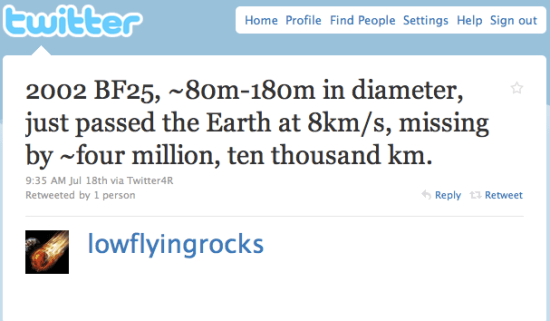 Twitter: As every hack comedian knows, it’s a medium that is exclusively used so people can tell each other what they just had for lunch. But developer and designer of “Internet-based things” Tom Taylor has found a simple, genuinely frightening use for the service: Alerting you whenever an object passes within 0.2 astronomical units, or 18.6 million miles, of Earth. This happens several times per week.

Speaking to Pars3c, Taylor said the feed wasn’t particularly hard to set up:

[Taylor] wrote a simple script in Ruby, which fetches the page every night, extracting the useful information and scheduling the next day’s tweets. The HTML on the NEO site is a bit of a mess, but I’ve seen worse! I wanted to keep the volume of tweets to a few times a week, so it’s always a surprise when a message appears. 0.2AU seemed like a good cut off point – a wider range would be a bit too verbose.

Best quote comes at the end of the interview: “I haven’t written any code to deal with a collision situation . . . yet.”

If you want some tidings of narrowly averted doom in the mix with your sandwich bulletins, you can follow @lowflyingrocks on Twitter.