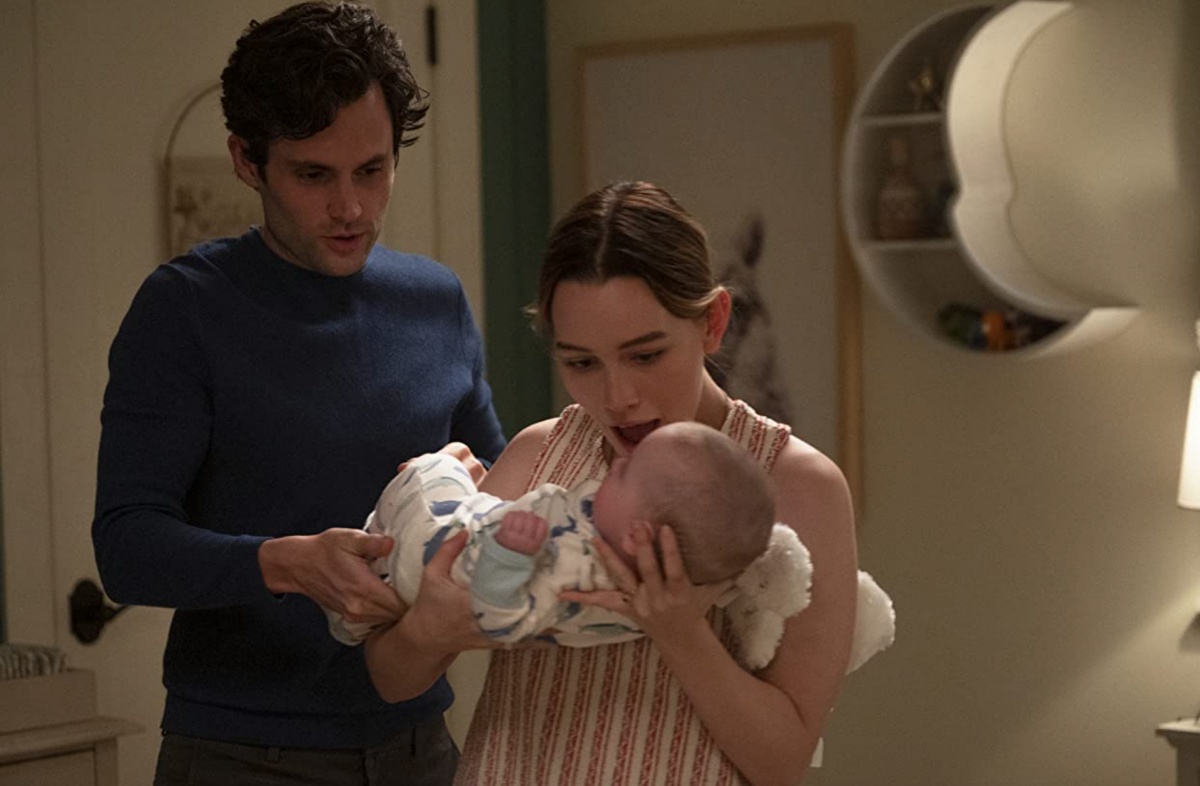 Victoria Pedretti as Love Quinn-Goldberg in season three of the Netflix drama-thriller You is so compelling you’d almost forget she is a cold-blooded murderer. Emphasis on murderer.

Spoilers for Season Three of Netflix’s You

The fact that I am so emotionally invested in You remains an ever-evolving shock to me. In season one and two we followed Joe (Penn Badgley) our “romantic”-killer who in his search for love and is not above murdering everyone who gets in his way. First season we had Beck (Elizabeth Lail), a graduate student and aspiring writer, who he stalked and then eventually killed once it became clear she was not okay with him murdering her ex, her best friend, and just people in general in order to be with her.

Then in season two we moved to L.A. and met Love (Pedretti) a baker with a toxic relationship to her family. Joe quickly gets back on his bullshit, while providing biting commentary about how vapid L.A. is. Love becomes Joe’s new love and obsession until it is revealed that she is herself a serial killer and kills someone right in front of Joe. Suddenly his Madonna/Whore complex activates with a vengeance and he rejects Love. Until it is revealed she is pregnant.

So then it is time to get married, white flight to suburbia, and live happily ever after.

A lot of this season, when it is not dealing with murder, focuses on the idea of soul mates and if such a thing can even exist. On some level, there is this knowledge we have as the viewer that on paper Joe and Love are perfect for each other. They are serial romantic, serial killers who long to feel whole and loved by someone else. While we don’t get as much insight into Love as we do Joe, one thing is clear—Joe can not love a real woman. He can only love a paradigm. An easily shatter-able illusion.

Take the reaction when Love kills her neighbor, Natalie (Michaela McManus), for “seducing her husband.” Joe is saddened at first, but when he sees texts on Natalie’s phone calling him the “boring neighbor guy” that is all it takes to reset his feelings back to Love. He can only see her when it concentrates on her being a wife and mother. Once he is reminded that she is a flawed person who will kill, that is when it dies.

When Joe starts a romance with the librarian, Marienne (Tati Gabrielle), it isn’t because Marienne is perfect. It is because she is idealized in his mind as someone who can understand his pain. Marienne was a great addition and it was interesting seeing a Black-Asian actress play a character who is treated as the pure foil to a white woman. But the reality is that Love is more like Marienne than even Joe realizes.

Love is a bad person. Don’t worry I’m not here to wax poetically about how she deserved to live. But what makes Love so thrilling, so oddly rootable, is that her insecurities and pain are so normal. She’s really just a young new mom who feels out of sorts and lost. Who responded to trauma in the most violent way possible. She kills for love. And because of that the person she loves the most, who is also a serial killer, can never love her.

It is amusingly tragic but also serves as a reminder of how shitty Joe is. He’s a hypocrite who can’t face the fact that his love isn’t real. He is a murderer. His unfaithfulness and stalking are just the stepping stones towards his larger villainy.

At the end of the season Love almost kills Joe, but he ends up injecting her with wolfsbane and kills her instead. Her last words are, “We’re perfect for each other. But bad for Henry. He’ll know what you are.”

When speaking with The Wrap, “Oh, they’ve given Joe the one person he could be with.” Badgley says he remembered thinking. “So I thought, maybe, that it would be this kind of Bonnie and Clyde vibe, which had its own appeal. But then, of course, that’s not what is possible with someone like Joe.”

Joe has now killed two of the women he’s been in love with. And both times he has justified it. He finally met the one person who could know who he is and love him, but because she could never be the angel in the house, he gaslit and manipulated her, making her act even more unhinged so he could justify his actions.

Love is a truly excellent villain protagonist because, unlike Joe, she knows that she has this evil in her. Joe will never stop seeing himself as a hero. Those human elements to her make Love even more engrossing character.

In an interview with Elle Pedretti said, “She’s allowing these relationships outside of herself to give her a sense of purpose. Including having a child. Instead of finding and being driven by a sense of security and purpose within herself, she gains value from these things instead of seeing herself as enough, just as is. I think she and Joe both struggle with this, which is part of why we sympathize with them. It’s like all of this behavior is being driven by deep insecurity. This is also true about so many of the narcissists that run society. It’s like a product of the trauma they experience as children, and they’ve never learned to find value outside of themselves, and so will aspire and become greedy and try to fill this never-ending void instead of just deciding that you’re enough. I mean, it’s not easy.”

It sure as hell isn’t.