Louise Linton, Wife of Treasury Secretary Steven Mnuchin, Should Probably Not Try to Do Words Anymore 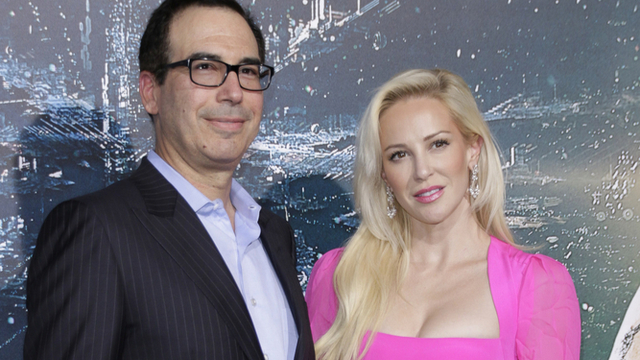 Compared to others in Trump’s cabinet, treasury secretary Steven Mnuchin doesn’t garner many headlines. He got some attention lately as being on the receiving end of Rep. Maxine Waters’ now-iconic declaration of “reclaiming my time.” But in general, we don’t hear much about the Mnuch.

But yesterday we sure heard a lot about Mnuchin. Or rather, about his wife, Louise Linton. Here’s what we know about Linton: she’s a Scottish semi-professional actress; she married the treasury secretary/former Wall Street banker/Hollywood producer this past June; she loves designer labels; she does NOT react well to criticism.

Linton accompanied Mnuchin on a trip to Kentucky Monday and posted a picture to Instagram documenting the trip. But in a weird move of ostentation/possible unethical exploitation of her political position, she decided to tag and hashtag all the designers she was wearing in a shot of her deplaning a government jet. 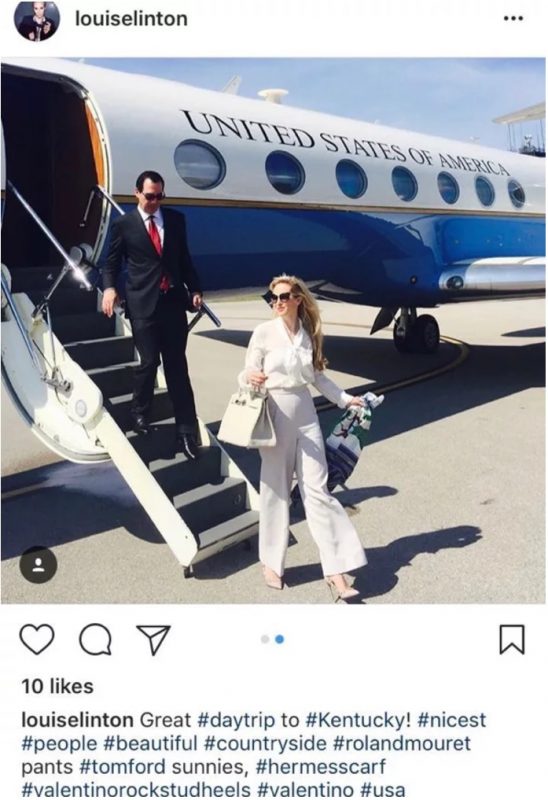 To be fair, with Trump as president, I get why she didn’t think it would be inappropriate to essentially turn a government trip into a clothing ad.

Far worse than the picture itself, though, was her response to a comment from a woman named Jenni Miller, who wrote “Glad we could pay for your little getaway. #deplorable.” Linton’s response was not only disproportionate in both length and tone, but about as passive aggressive and condescending as you would expect from a woman who tags her scarf in a picture of government work.

The comment reads, “Aw!!! Did you think this was a personal trip?! Adorable! Do you think the US govt paid for our honeymoon or personal travel?! Lololol. Have you given more to the economy than me and my husband? Either as an individual earner in taxes OR in self sacrifice to your country? I’m pretty sure we paid more taxes toward our day ‘trip’ than you did. Pretty sure the amount we sacrifice per year is a lot more than you’d be willing to sacrifice if the choice was yours. You’re adorably out of touch.”

Then, either going off of Miller’s profile picture or possibly having clicked through her account, Linton proceeded to comment on her family. “Thanks for the passive aggressive nasty comment. Your kids look very cute. Your life looks cute. I know you’re mad but deep down you’re really nice and so am I. Sending me passive aggressive Instagram comments isn’t going to make life feel better. Maybe a nice message, one filled with wisdom and hunanity (sic) would get more traction. Have a pleasant evening. Go chill out and watch the new game of thrones. It’s fab!”

Wow. the complete obliviousness it must take to use this amount of passive aggression to call someone passive aggressive is mind boggling. Though it’s the accusation that Miller is “adorably out of touch” that puts this over the top. Because clearly Linton is the one who is out of touch, but there’s nothing adorable about it. And as it turns out, this is not new for her.

Last year, Linton self-published a book about her gap year spent in Zambia, titled In Congo’s Shadow. The book told the story of how she “abandoned her privileged life in Scotland” (her family owns a castle there) and spent six whole months in a “horror show” and “living nightmare” surrounded by, as she described them, “savage” rapists and murderers. She herself was, according to her, a “central figure” in the Congolese war. As many critics noted, she had seemingly no interest at all in facts and she conflated  Zambia, Congo, and Rwanda into one big generalized Africa with no interest in anything but painting herself as the bright, blonde shining sun in the middle of that “inky blackness.” Yes, she really wrote that.

“Now that I’m a grown woman living in California and pursuing a very different dream — as an actress and film producer — I know that the skinny white girl once so incongruous in Africa still lives on inside me. Even in this world where I’m supposed to belong, I still sometimes feel out of place. Whenever that happens, though, I try to remember a smiling gap-toothed child with HIV whose greatest joy was to sit on my lap and drink from a bottle of Coca-Cola.”

After being condemned by the Zambian government and widely criticized for being peak white savior racist bullshit, the book was removed from sales. Likewise, her Instagram post has been removed and her account set to private.

I would say the internet never forgets, but let’s be honest. Louise Linton is entirely forgettable.

Apparently I offended this deplorable girl I had never heard of until today. According to my 20 second Google search, she’s an aspiring Penthouse model who married an old rich guy in a wedding officiated by a homophobe and attended by other couples of similar age and beauty gaps. She says she’s a nice person. I doubt it. There weren’t any Nazi sympathizers at my wedding. #byelouise