That Lost Star Trek Script Will Be Filmed, and the Writer Wants Shatner (But Not As Kirk)! 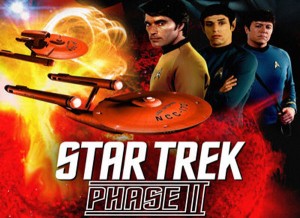 Well, it’s a great day to be the author of a lost Star Trek episode. Not long ago, we told you about Norman Spinrad, a writer on Star Trek: The Original Series who was commissioned by Gene Roddenberry to write a script that would provide a comeback opportunity for Milton Berle. It was never made, and Spinrad thought it was lost forever until a fan approached him with a copy of it. Now, 45 years later, the fan-produced web series, Star Trek: Phase II, has announced that they’ll be shooting Spinrad’s script, and the writer has a new actor in mind to play the role meant for Berle — William Shatner.

Spinrad, who is probably most famous for writing the episode “The Doomsday Machine,” broke the news on his Facebook page that the web series, which takes place immediately following the events of the original series, was going to shoot the newly recovered script entitled “He Walked Among Us.” (You can actually get your own copy of the script on Amazon.) And the cast and crew of Star Trek: Phase II are not your typical web series nerds — they operate at a “semi-professional” level of production and have been nominated for Hugo and Saturn Awards. They were also named the Best Sci-Fi Web Series by TV Guide. (You can watch a few of the episodes on YouTube; here is one episode, entitled “Enemy: Starfleet!”)

But who will play the role that was meant for the late Milton Berle? Spinrad is crossing his fingers for the former Captain Kirk, William Shatner. He realizes it’s a long shot, and it’s by no means a sure thing, but Spinrad is hoping to get in touch with the still-spry actor and try to get him on board:

“I’d like to have William Shatner act in it — not as Kirk, but as Bayne! And Shatner being Shatner, I think I just might talk him into doing it since I did write ‘The Doomsday Machine,’ and he could read the script, and it’s just the sort of off the wall notion he might like.”