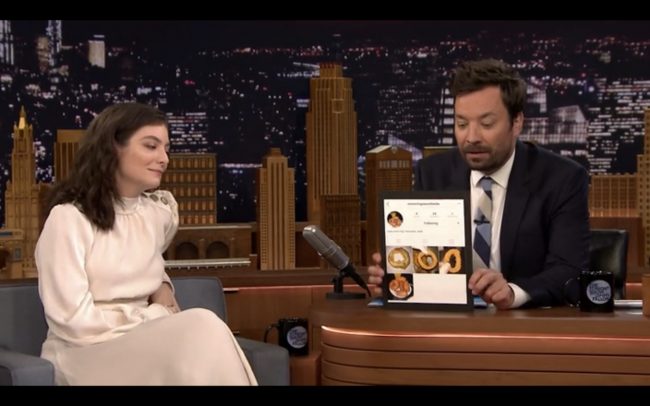 Last night on The Tonight Show, Lorde confirmed that yes, she actually had been reviewing onion rings on Instagram, as per an investigation carried out by New Zealand’s Newshub.

The news outlet was tipped off to the onion ring account by way of a “big Lorde fan” who noticed that the pop star followed “onionringsworldwide,” an account that had a handful of photos of onion rings accompanied by reviews of said rings in the caption. It’s a pretty great show of sleuthing on Newshub’s part, as they cross referenced some of the onion ring post dates with Lorde’s previous concert tour. They eventually ended up reaching out to Lorde’s management, and when they did, the account mysteriously disappeared. [FX: X-Files theme song.]

Watching the clip above, you can kind of see how Jimmy Fallon starts to lead the conversation a bit, asking Lorde about her favorite diner then suddenly he asks her about onion rings. She catches on from there, and it’s pretty great to watch her reaction as she cops to being the mysterious fried food reviewer. As I’m sure any mystery food blogger or critic can tell you, getting your cover blown like that is effectively a career-ending move. Lucky for Lorde, she’s got this whole music thing to fall back on.

As well, it seems like a good move, as Lorde mentions that she was also worried about it becoming A Thing because it could mean fans would start “throwing onion rings” at her on tour. I mean. Yes. Legit worry. But at the same time, I’m like, hey, you do you. I am all here for your excitement about onion rings. You’ve got some pretty solid opinions about what makes a good onion ring (batter > crumb, pickle the onion beforehand), and let me tell ya, that’s an evasive art. I am all here for you doing your thing if you want to open that account back up.

Either way, I’m going to be keeping an eye out for “chickenfingersworldwide” (too long?) or “steakfriesworldwide.” (Note to self: maybe claim these as my own.)