These Two Museums Are Pitting Their Exhibits Against Each Other

It's A Fantasy Draft for Museum Nerds 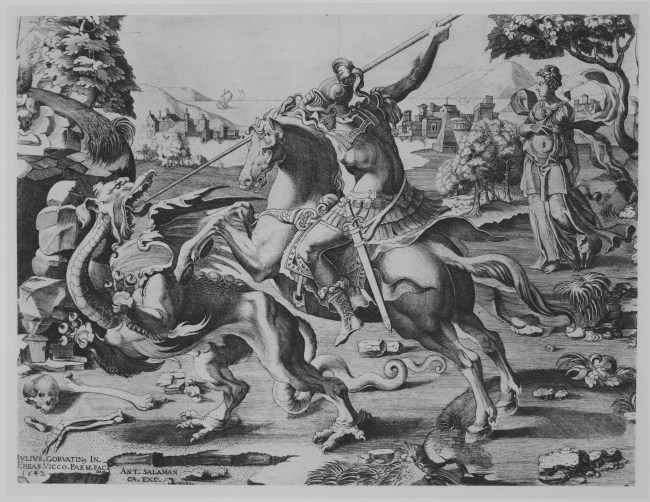 The London Natural History Museum and Science Museum have been vividly imagining a melee between their exhibits, like some sort of fantasy draft for a Night at the Museum sequel, and I’m all about it.

It all started when user @bednarz asked the two museums who would win in a “staff battle” between them.

The Natural History Museum was quick to jump in with their dinosaurs, but the Science Museum fired back with technology.

We have dinosaurs. No contest.

@NHM_London is full of old fossils, but we have robots, a Spitfire and ancient poisons. Boom! #AskACurator https://t.co/lsdOS3HqyO

We have robot dinosaurs, Pterodactyls and the most venomous creatures on Earth. Plus volcanoes and earthquakes … And vampire fish. pic.twitter.com/H2dNv0wgQr

What about this merman & we do have a Polaris nuclear missile as Khalil says! pic.twitter.com/uczMFrvKIw

From there, the battle descended into the fantasy and steampunk matchups of your dreams, like sea dragons versus bathyscaphes:

*Game of Thrones theme music* Send in the (sea)-dragons… (from The Book of the Great Sea-Dragons by Thomas Hawkins, 1840). pic.twitter.com/K4Duh3w7Vk

We see your dragons and have escaped in this bathyscaphe https://t.co/m4gMCpGNxq pic.twitter.com/zqs0YwiQRO

Or the mad scientist match-up of the century – revived dinos versus 3D-printed dinos:

We were all set to call it a draw, but then we saw this. Turns out, we have a dinosaur AND it’s 3D printed! pic.twitter.com/vLRK0PI5JE

Or more generic feats of human ingenuity, like fleas versus flea traps:

In 1785 you’d be too distracted by our fleas… they are legion (and even have there own twitter feed @NHM_Fleas) https://t.co/TvgIg9EoTf pic.twitter.com/ckOSo5ks8m

We would have caught the fleas in this Chinese bamboo flea trap (on show in our Making the Modern World gallery) https://t.co/4LI5va8ECv pic.twitter.com/7zWk3gzEgS

Now, this begs the question: which museums would you like to see take each other on next? Which collections would produce the best battles? The longest-lasting ones?

At first thought, my money’s on Maine’s cryptozoology museum (though it’s quite small), the Terracotta Army museum in Xian, China (because, come on! Mini army!), or the Metropolitan Museum in New York City (because I’d want to go full “Treguna Mekoides and Trecorum Satis Dee” on that arms and armor exhibit). But I’m sure the TMS readers can come up with even better suggestions.