“Heterosexual Pride Day” Is Stupid and Everyone Is Dragging It 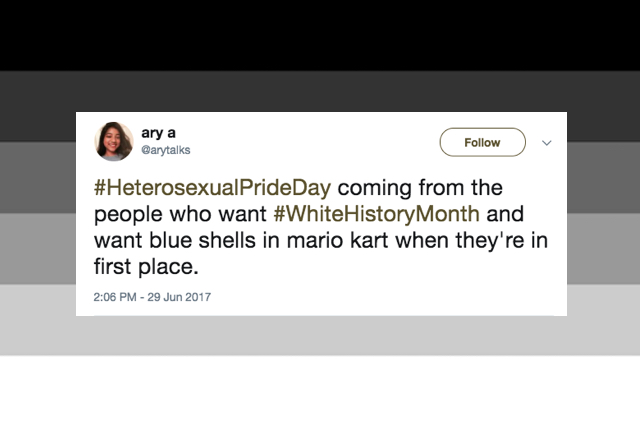 Because we can’t have nice things, “#HetersexualPrideDay” is currently the top trending topic on Twitter.

Thankfully, when you take the time to scroll through the tag, most tweets are there to lambast the concept and explain why heterosexuals don’t need a Pride day. If you’re heterosexual and proud of it, go you, but no one is trying to take that pride away from you. No one is trying to convert you, jail you, ban you from activities like marriage to the person of your choice. You are not estranged from your family because of your heterosexuality. You did not have to come out to anyone because your identity is considered the norm.

As the assumed “default” sexuality and accepted worldwide, heterosexuals haven’t struggled against hatred, fear, violence, and repression because of their sexuality. Every day is goddamned heterosexual pride day. Let the LBGTQIA community have June as Pride Month, which was hard-fought for. Let them have this one month. Expressing pride in you non-heterosexual sexuality can still be a death sentence in many places today around the world. STFU with Heterosexual Pride Day.

I’m reminded of people who yell about All Lives Matter, incapable of getting the point that all lives are not treated equally in this country. I’m reminded of the men who just could not handle the concept of a handful of women-only Wonder Woman screenings, who didn’t feel it appropriate or “fair” that females could dare choose to celebrate the first female-led superhero movie without them. For the love of God, people in positions of power and privilege, just let others have the things that, for ONCE, are not about you. It’s not about excluding you. It’s about calling attention to groups that are historically and still marginalized. Learn the difference.

Persecution complexes are reaffirming to those who benefit from unearned privileges. #HeterosexualPrideDay #trump #theresistance #iqrtg

The responses on Twitter are spot-on, searing, and sometimes funny as hell. Not that I expect many people of the heterosexual pride persuasion to absorb their message. (However, the only pro-Heterosexual Pride Day tweets I’ve seen so far are from obvious troll accounts and accounts with “Red Pill” in their name.)

#HeterosexualPrideDay Since straight people are so determined on having this be a thing: pic.twitter.com/Vh8F7yHIru

the countries highlighted in red is where straight people were murdered for being straight #HeteroSexualPrideDay pic.twitter.com/if4URQsGUQ

happy pride month to all those straight people who have gone through years of pain and not being accepted.. oh wait? #HeterosexualPrideDay pic.twitter.com/k3AulsWvbE

Me when I saw that #HeterosexualPrideDay is trending on twitter pic.twitter.com/yOA5jZwZ1O

Here’s a list containing all of the victim’s names who have been killed for being straight in the last 500 years. #HeterosexualPrideDay pic.twitter.com/uhvSsibDbe

it isn’t wrong for straight people to be proud, the question is why are they badmouthing gay pride in the same breath #heterosexualprideday

Have a happy #HeterosexualPrideDay folks, because apparently other 364 days were not enough for you

Happy #HeterosexualPrideDay although I do not personally condone or approve of your lifestyle choices. I’m here if you ever want to change.

when i see #HeterosexualPrideDay trending but it’s just everyone dragging the hash tag pic.twitter.com/75sL9YYY7L

This tweet goes out to all of the people who feel the need for #HeterosexualPrideDay! pic.twitter.com/NEc2l8HHtz