Hearts, Stars, and Horseshoes, Clovers, and the Tesseract: Loki Charms Are Coming

Does Loki get soggy in milk? 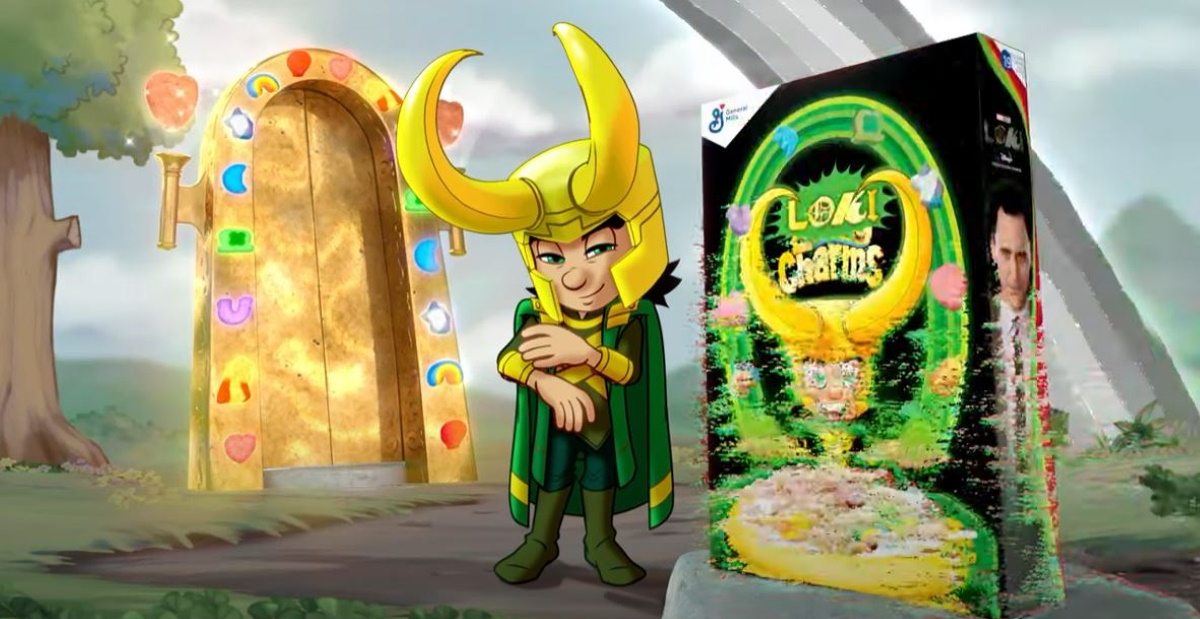 Do you know what would go great with the upcoming Disney+ premiere of Loki this Wednesday?

Find special #Loki Charms box at https://t.co/vuQaIBprlS this Wednesday at 11am ET. And tune in to Marvel Studios’ @LokiOfficial on @disneyplus, streaming 6/9 pic.twitter.com/KgRszuwq7b

As several have pointed out because, well, that Marvel cereal art from Bamboota and Elliot Fernandez was so dang charming back in 2014!

Anybody remembers this shirt? We have come full circle. pic.twitter.com/uX9M6KZYBG

As we can see from the announcement trailer for the cereal, after Lucky the Leprechaun sings the iconic jingle, he takes off with a bowl of cereal to, presumably, get ready to sit and watch the premiere. Loki, ever the delightfully extra tricker, literally appears on the scene instead of using the door, grinning over his greatest achievement yet: becoming a cereal mascot. His image takes over the Lucky Charms box and he lets out a wicked cackle, Tom Hiddleston’s image on the side of the box because we all know multiple Lokis can exist at the same time.

To be fair, Loki is being pretty humble about this, after all, it doesn’t look like the shapes of the marshmallows have changed at all. It’s nice that he kept it the way Lucky left it, you know? He also perfectly mimicked Lucky’s pose on the box, clearly an homage to such a legendary cereal mascot. I’m betting the cereal tastes exactly the same, too, and know that we’ll never know the truth because NO ONE is gonna open the box, oh no, this screams COLLECTOR’S ITEM that sits on a shelf full of Marvel merch.

I am curious to see what the back of the box looks like, though. I’m partial to those cute kid games they put on the back, like Lucky maneuvering through a maze of rainbows.

Can Loki maneuver through a maze of rainbows, please?

Loki is currently in the grocery and he bought a special #Loki Charms cereal. pic.twitter.com/B2XE1LwRJW

As entertaining as it would be to waltz into a grocery store, burdened with the glorious purpose of snagging a box of toasted oats and marshmallows before it’s sold out, the cereal will only be available at the Mischievously Delicious website for $8 a box (which includes shipping).

For a limited time.

Yep, this is one of those limited-time deals where you’re probably gonna have to be at your computer before sunrise. According to Comicbook.com, there will only be 3500 boxes of Loki Charms available, though there is an encryption code on the website that, when cracked, will get you early access to the cereal. That’s limited to 1000 people, though, so as I’m writing this it may already be too late.

Are you excited about Loki Charms? Are you gonna try and get a box? And, more importantly, what Marvel character should be the next with a cereal tie-in?