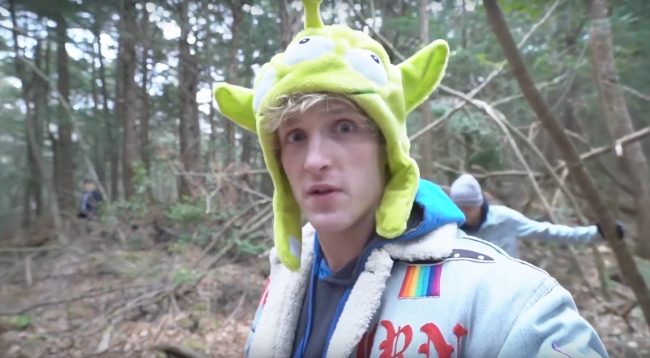 Logan Paul, who is apparently a famous person on the Internet, caused an international uproar after posting a video filmed in Japan’s so-called “Suicide Forest.”

Paul and his friends, ostensibly looking for “ghosts,” came upon an apparent suicide in the forest, footage of which was included in the video and promoted in its packaging. They were visiting Aokigahara, also known as the Sea of Trees, a forest in Japan that has become one of the world’s most well-known places associated with suicide.

Aokigahara has a long and fascinating association with death and spirits in Japanese folklore, but Paul was not there for a deep dive into history. Wearing in a neon green alien hat, Paul and his friends roam the forest in search of spooky content and come upon a body. It’s not simply shooting—and uploading—footage of an apparent suicide that’s provoked outcry, but the subsequent behavior of those involved. Per NextWeb:

“This is not clickbait, this is the most real vlog I’ve ever posted to this channel,” Paul said in the now-wiped video. “I think this definitely marks a moment in YouTube history because I’m pretty sure this has never hopefully happened to anyone on YouTube ever. Now with that said: buckle the fuck up, because you’re never gonna see a video again.”

While the footage shows the purportedly dead person with his face blurred out, the YouTuber can be heard making remarks which viewers have since condemned as “disrespectful” and “appalling” – and not without a reason.

Here’s an account from NY Mag of the now-deleted video:

And then he and his entourage discover what looks like a body hanging in the Aokigahara. “Yo, are you alive?” calls out Paul. “Are you fucking with us?”

After Paul realizes that he is in all probability filming a dead body, he turns the camera back on himself. “So, a lot of things are going through my mind. This is a first for me.” Paul (or one of the other members of his entourage) then films the body from a few feet away. “His hands are purple. He did this this morning,” says Paul.

Paul then turns the camera back on himself. “Oh no, I’m so sorry, Logang,” says Paul. (Logang is what Paul calls his community of fans.) “This was supposed to be a fun vlog.”

“Suicide is not a joke,” continues Paul. “Depression and mental illness are not a joke. We came here with an intent to focus on the ‘haunted’ aspect of the forest. This obviously just became very real, and obviously a lotta people are going through a lotta shit in their lives.”

Other members of Paul’s entourage, such as Andy Altig, have also posted their own versions of the visit to Aokigahara, titled “WE FOUND A DEAD BODY!!! **emotional**” (Again, this video contains footage of a person who appears to have recently committed suicide.)

Logan Paul is an amoral piece of shit who could not be less deserving of his platform. Fuck. If you need help, the National Suicide Prevention Lifeline is 1-800-273-TALK.

People are especially upset at Paul’s attempts to scramble out of the terrible decision-making behind the video by claiming he was working towards “suicide awareness.”

When my brother found my sister’s body, he screamed with horror & confusion & grief & tried to save her. That body was a person someone loved.

You do not walk into a suicide forest with a camera and claim mental health awareness.

We gotta start calling the “suicide forest” by its name, Aokigahara. It’s located in Japan which has the highest suicide rate in the world.

Mental illness is viewed with huge shame there, leading ppl to not seek help. It’s not a joke to be exploited by an American vlogger.

The “We found a body” video racked up 6 million views in the hours it was live on YouTube and trended across the platform at #1, which should have been fast corrected by YouTube, but was not. In response to the immense backlash and calls to remove more of Paul’s content or close his channel, YouTube has apparently come up with an official statement, though not publically yet.

I just received an official statement from a contact at @Youtube regarding the outrage and controversy around Logan Paul’s (now self-removed) “We found a dead body” top trending Youtube video.

I’ll save my personal comment for later. Just wanted to pass this along. pic.twitter.com/JNTQDMVvT4

Where do I begin…

Let’s start with this –

This is a first for me. I’ve never faced criticism like this before, because I’ve never made a mistake like this before. I’m surrounded by good people and believe I make good decisions, but I’m still a human being. I can be wrong.

I didn’t do it for views. I get views. I did it because I thought I could make a positive ripple on the internet, not cause a monsoon of negativity. That’s never the intention. I intended to raise awareness for suicide and suicide prevention and while I thought “if this video saves just ONE life, it’ll be worth it,” I was misguided by shock and awe, as portrayed in the video. I still am.

I do this sh*t every day. I’ve made a 15 minute TV show EVERY SINGLE DAY for the past 460+ days. One may understand that it’s easy to get caught up in the moment without fully weighing the possible ramifications.

I’m often reminded of how big of a reach I truly have & with great power comes great responsiblity… for the first time in my life I’m regretful to say I handled that power incorrectly. It won’t happen again.

I love everyone. I believe in people. I’m out here. Peace #Logang4Life

But as some people point out, there’s a lot to be desired here.

I didn’t think it was possible to publish a less sincere ‘apology’ than Tmartn or Toby Turner but hey, 2018 kicks off with whoever the fuck Logan Paul is doing just that.

We all make mistakes. We’ve all been idiots at various points in our lives, sometimes on the Internet. We can all be shocked and behave strangely in the face of something shocking. But at a certain goddamn point, you should know not to edit, upload, release and promote a video designed around your own insensitive stupidity. Especially when you have 15 million followers, most of whom are teenagers and children. Paul was looking for views and attention, the entire edifice upon which his “career” is built.

What’s most bad about a Logan Paul, who is very bad, is that he’s just playing The Game. We have an online economy that a) lacks editorial oversight and b) exclusively rewards traffic, meaning attention. It’s that simple. And that dumb. And kids love it

Even as we see continued criticism of Paul, we’re also witnessing the spin in action.

Headlines on @CNN, @NPR, and @nytimes: “YouTube Star Apologizes After Being Criticized.”

…Gotta hand it to Logan’s PR team for getting to the news outlets before they published something accurate. pic.twitter.com/6CO26Olmpm

There’s a wider conversation to be had here about our YouTube and growing social media influencer economy. Stunts like Paul’s will become increasingly commonplace as these kinds of “celebrities” jostle for more content and more eyeballs in a crowded field. We’ve already seen egregious and highly exploitative videos made for the purposes of YouTube fame, of which Paul’s is only the latest in the series.

The scary thing here is that while I don’t think Paul could have anticipated this level of criticism (that would have taken the self-awareness not to post the video in the first place), the fact of the matter is that now many more millions of people—including me—have now heard of Logan Paul. It appears as though there will be no real repercussions in response to the video, and as with other YouTube “controversies” like those surrounding PewdiePie, in the end, Paul’s notoriety will only grow.

In an ecosystem-based in popularity—even if those clicks and views come from a place of curiosity or disgust—that’s all that matters. “I think this definitely marks a moment in YouTube history,” Paul says in his video. And it’s clear that was what he was after.

This story is worth covering because no one so visible should be as stupid and insensitive as Logan Paul when dealing with the matter of suicide going forward. But this is the end of me mentioning Logan Paul in any articles. I’m going back to my corners of the Internet, where I happily did not know that he existed until today.

Paul issued yet another apology while I was writing, an apology totally unscripted and absolutely not read from any sort of prompter:

In light of the Logan Paul video, I think it’s good to remember that more chatter/stories about suicide without providing/referencing access to help is potentially dangerous. @CrisisTextLine and @TrevorProject do great work and have round-the-clock help.