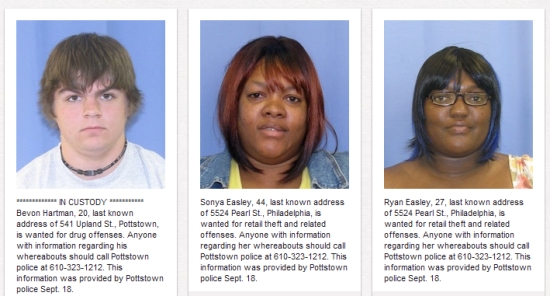 In our ever-increasingly technology dependent world, social media has become a force with which to be reckoned. Our old institutions are still trying to bridge the gap, but the good folks in Pottstown, Pennsylvania certainly seem to understand our evolving world better than most. After a local paper, the Pottstown Mercury, started pinning mugshots to Pinterest, the local police have seen a 58% increase in arrests.

The Pottstown Mercury explains in greater detail what’s been going on:

Dozens of tips have been called in from people who have perused the Wanted by Police list created by The Mercury. The list features photos of those wanted for a variety of crimes and a brief description of the offense they’re charged with. Offenses range from felony drug charges to felony assault; theft to fraud; and DUI to attempted murder.

Pottstown Police Capt. F. Richard Drumheller said his department has seen a dramatic increase in the number of people with outstanding warrants they’ve been able to capture thanks to the public.

“We have seen an increase in tips” from Mercury readers, he said. “Last time we checked, from when we first started (publicizing the outstanding warrants with The Mercury,) we have increased (the number of arrests) by about 58 percent. That’s pretty good.”

This is probably the best use we’ve seen yet for Pinterest, which is usually used for such lovely things as goofy cat furniture and elaborate nail art. Mugshots might just complete the holy trinity, if this trend continues.