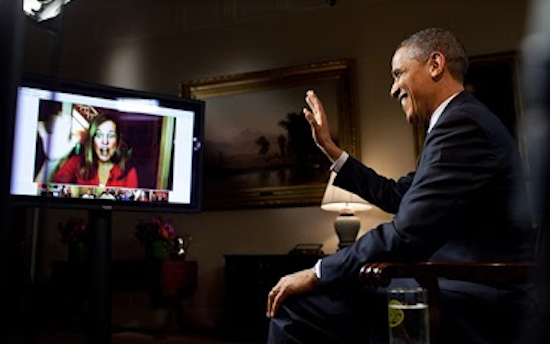 Was the State of the Union earlier this week fun, but just not enough President for you? Well, good news — Obama is doing a Google Hangout, and we’ll have the live stream right here. This isn’t Obama’s first “Fireside Hangout” — he did one about a year ago — but it’s the first one of his second term, and hopefully a sign that these will be a habit going forward. Yes, it’s going to be at least a little canned and PR-ish, but hey, it’s the damn President, nothing’s not at least sort of planned. Still, it’s a fun way to be interactive that doesn’t make anyone leave the office, and that works for us. Plus, you might get an answer for why the hell we still make pennies, and wouldn’t that be nice?

You can take a look at that and some of the questions that you could get insight on, including less SOTU-friendly topics like SOPA/CISPA, drug legalization and NASA funding here. You know, big important stuff that’s not exactly likely to get airtime in the State of the Union.

We’ll have a live stream of the Hangout here embedded here as soon as it goes live. (UPDATE: Which is now!) Until then, enjoy this gif of kittens playing.