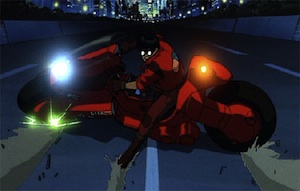 AKIRA — both the 1988 animated movie and the wildly different manga — has inspired plenty of creative fandom since well before you were born. But this latest live-action fan film stands out from the pack — not least because of the motorcycle duel at the end, shot with real motorcycles. It’s not a reenactment of the manga or the anime, per se, but rather a riff on the themes and icons of the series.

Over on Comic Book Movie, a fan called “IvanKW” posted the homemade film with this note:

We intended on making a “real” live action Akira to the best of our ability. We’ve acknowledged that there are far too many “live action” Akira shorts in which they simulated or rendered Kaneda’s Motorcycle into a scene, but doing so compromised showing Kaneda actually riding it, so we decided on going with an actual Motorcycle. We also wanted to have our own story since too many individuals have attempted to make a live adaptation of the original Anime.

Arbitrary facts about the short film:
# Kaneda’s friend also has the Pill Symbol that he wears.
# In juke box at the bar, there is the “The Doors” Album in there. This was intentional to mimic the original Anime.
# While the drive through the city, spotlights were added to also mimic the actual Anime.
# Kaneda’s Jacket was based off the Manga Version, not the Anime.

It does make one hanker for the multimillion dollar studio AKIRA in summer of 2009 2011 (?) sometime before Neo-Tokyo is ravaged in 2019…