“My Fish”: How The Little Mermaid Helped a Genderqueer Teen Find Strength 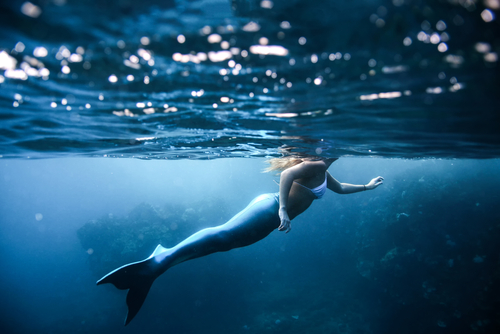 This story originally appeared on JennieSteinberg.com; it is reprinted here with the author’s permission.

Two and a half years ago, I sat in a movie theater with a friend and took in the words of the blonde cartoon queen in front of me:

How incredible, and how timely for Disney to put out a story like Frozen that would resonate with anyone who’s different! How wonderful to give an anthem to little children who are gay, who are gender nonconforming, who are geeky or quirky or different! When they face oppression or challenges, they can tap into an internal resource and declare, “let the storm rage on… the cold doesn’t bother me anyway!”

Then, a few months ago, The Hollywood Bowl played the 1989 movie The Little Mermaid with a live orchestra. I had always viewed The Little Mermaid as a pretty problematic film. As parodied in a hilarious series called “Lessons from a Disney Princess,” Ariel is a teenage girl who gives up her best feature and gets plastic surgery to win the heart of an attractive man.

The feminist in me recoiled at the plot…but the cast at the event was incredible, and I do love belting out “Part of Your World” in the shower, so I bought tickets.

Taylor, an old friend who is an Ariel superfan, flew in from out of town to watch Jodi Benson reprise her original role in The Little Mermaid. At dinner before the event, I asked Taylor why his interest in the cartoon had endured for so many years. And his response completely shifted the way I view the movie that’s been part of our cultural lexicon for 17 years: “I was a little genderqueer kid, and here was this movie about someone who said ‘I don’t fit in, I don’t belong here.’ It was transformative for me. Ariel longs to be part of the human world before she ever sees Prince Eric. It’s who she is.”

I asked Taylor if I could interview him in more depth about his experience with, as he calls her, “his fish.”

“When I was a child,” began Taylor, who was assigned female at birth, “I was convinced I was a boy. First day of kindergarten, our teacher directed all the boys to sit on one side of the room and all the girls to sit on the other side of the room. For everyone else it was an easy first question. But I just stood in the middle feeling like an idiot. I knew where I was supposed to go–the girls’ side–and I knew where I belonged–the boys side.”

This, explained Taylor, was the beginning many years of bullying by his peers. He described physical abuse, including one instance at age 10 when a group of girls beat him with field hockey sticks and chipped his spine. “The physical stuff was scary,” he said, “but the name calling and isolation was worse. I couldn’t make it stop hurting. A cut heals, those damn words just echoed.”

When Taylor was in kindergarten, the same year his teacher told him to “pick a side,” he saw The Little Mermaid in theaters. “I remember seeing her hide who she was from her family and for the first time I thought, ‘I’m not alone.’ It was a revelation to me.

“My immediate reaction was ‘I NEED EVERYTHING ARIEL.’ I wanted to be surrounded by her, because I was a deeply lonely kid who genuinely didn’t understand why I couldn’t make friends, why I intimidated the other kids. I would sing her songs when my heart was bruised.”

Now, at age 32, Ariel still plays a role in Taylor’s day-to-day life. “The Little Mermaid reminds me that if you honor yourself and are strong enough to live true, then you can find your place. She reminds me to never settle for staying half-safe and false. And with her family supporting and accepting her in the end, it really makes me feel hope.”

It’s time to see what I can do,
To test the limits and break through.
No right, no wrong, no rules for me…
I’M FREE!

Jennie Steinberg, LMFT, LPCC is a strength-based psychotherapist practicing in Downtown Los Angeles. She loves working with clients who are on identity journeys, working to live authentically, make major life decisions, and build their self-esteem. You can visit her website to make an appointment or read more articles she has written at jenniesteinberg.com.