We Talked To Lisa Sterle About the Amazing Modern Witch Tarot I have a new favorite Tarot deck. Yes, that does actually mean something, because I’m up to five now. Every deck has a different personality and vibe, but right now I’m in love with the Modern Witch Tarot created by artist Lisa Sterle. Sterle is a comic artist and all-around awesome person who created a tarot deck that’s just what it says on the box: a take on the classic tarot that reflects the witches of today in all our diversity and beauty. I adore it and so did the rest of the staff here at the Mary Sue.

We reached out to Lisa and got to chat about tarot, creating the deck, her favorite cards, and more.

The Mary Sue: Has Tarot always been a passion for you?

I think I first got into tarot in college. I had a few friends that started doing readings for me, and I fell in love pretty quickly! My first deck was the Thoth, which was a bit tricky to learn, so I tried the RWS deck and it just clicked for me. I loved that it was a way to both connect with friends and myself. Tarot is such a wonderful way to get into very deep, thoughtful conversations with friends and to strengthen bonds and relationships. I also love to use it to self-reflect, to kind of pause from the daily routine and check in with yourself.

How did you come to the idea of putting your spin on the tarot in such a feminist and diverse way?

Honestly, I feel like I sort of stumbled into creating this deck? I had first created the Ten of Swords art, which got a massive response I wasn’t expecting. As a relatively unknown artist at that time, I just had to stop and think … why? I thought about how just the basic act of reframing the art of tarot into a modern setting seemed to make it resonate in a new way with both old and new tarot enthusiasts. So I had a crumb of an idea: make tarot more relatable.

From that point, it took a year or so of gestation to figure out the next steps, but I think it all came together when I realized that I wasn’t seeing the badass witches in my everyday life reflected in a lot of tarot. I was definitely inspired by the tarot community directly, specifically, there was a groundswell of support I received from witches of color. I wanted to make a deck that actually reflected the absolute diversity of tarot today, and make it intersectional and feminist.

The Modern Witch Tarot derives direct inspiration from the iconic Rider-Waite-Colman Smith deck, what was your process for developing the deck? Did you go card by card or start with more general ideas?

I started with the major arcana, as those cards definitely have the trickiest concepts to communicate, as well as being absolutely rife with symbolism. I was developing the language and the style of the rest of the deck with those cards, from color palettes, to settings, to fashion, to character. I felt how large the project was when I started it, and I knew I had to be really intentional in my choices as I went along, so no matter what cards popped up in a reading, they all felt like they were linked and communicated with each other.

So much of the Rider-Waite-Colman Smith imagery is so iconic, and you honor it so well in this deck, how did you decide what to maintain and what to modify?

That was definitely the hardest part, as I love the RWS imagery and there’s a reason why it speaks to so many people. It’s full of archetypes and definitely has an air of ancient knowledge that’s definitely helped by Smith’s choice to set her characters in a more medieval setting. I knew that some of that feeling might be lost with my attempt to bring the imagery into the present, but I thought that was a worthwhile trade if the cards ended up feeling more relatable to today’s readers. 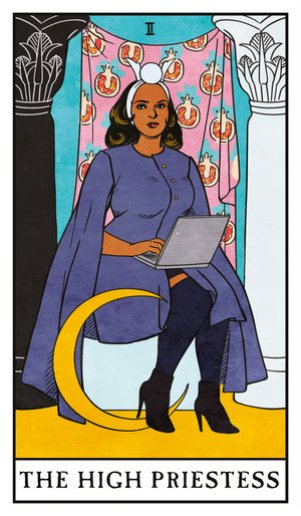 If anything, I guess I was hoping to possibly make tarot even more accessible. I chose to do this by making the fashions current, the settings modern, sprinkling in technology when it felt like it could help to convey the meaning of the card more immediately. I tried to maintain a lot of the compositions because I love the simplicity of it. I also tried my best to maintain the meanings of the symbols within the cards, even if I altered the actual imagery.

The thing I love about this deck is that it’s diverse in all ways, showing people of various races, genders, and sexualities and how this really reflects the modern witchcraft and divination community, as well as just our modern society. How important was bringing that diversity to tarot for you in creating this deck?

That was literally the primary reason for creating the deck! I wanted the deck to feel almost like your own coven, and group of friends and mentors, and idols, the people that surround and inspire you on a daily basis.

What cards do you think required the most change or updating to a modern viewpoint? For a specific example, I love how the Three of Pentacles became an art class rather than a cathedral.

Oh yeah, the Three of Pentacles was a fun one to reimagine. Honestly, the cards that reference the Church in any way I tended to alter the most. I was raised Catholic, but am no longer a part of any organized religion. As tarot and witchcraft are often a counter to traditional religions,  those religious symbols didn’t feel like they quite belonged in my understanding of tarot.

The Hierophant in particular was a big change I think, to take her from the keeper of the gates to being more like the welcoming guide that brings you into the realm of tarot and the unknown. The Eight of Pentacles was a pretty big change too, etching and metalworking didn’t feel quite universal enough for me to bring home the meaning of that card. I really made big changes when I felt like there was a simpler, more modern way to portray the concepts.

Do you have any favorite cards?

Oh man, tough question! Hmm, I love The Chariot, The Magician, Temperance. The Queen of Cups has always spoken to me across tarot decks in general.

The Modern Witch Tarot is available anywhere books or games are sold.