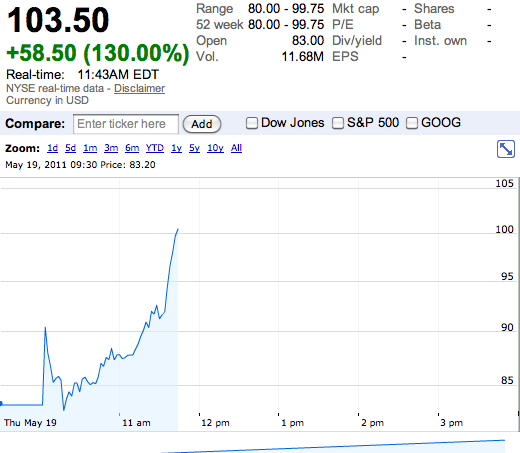 Professional social networking site LinkedIn officially went public this morning at $45 per share, valuing the company at $4.25 billion. Some of its critics argued that this was too high a valuation for a company that only made $243 million last quarter and expects to lose money this year, and while it remains to be seen over the long term whether those critics are right, in the short term, demand has far exceeded that value. Within two hours of opening, LinkedIn stock was priced at more than $100 per share or $9 billion for the company as a whole, making this the biggest initial public offering since Google’s in 2004.

According to LinkedIn, it has a network of 100 million users, although fewer than that are active; Quantcast, which typically underreports traffic, says that 86 million people visited LinkedIn at least one time this past month, though not all of those people are users. Using these two metrics, it’s safe to say that LinkedIn is being valued at roughly $100 per user: Remarkable for a freemium company that only gets a tiny fraction of them to pay.

Though many pundits denounced this IPO as bubble-mania at $45 per share, and are hardly likely to be persuaded otherwise at more than double that, a few have argued that it’s still a smart bet: Writing for Business Insider, an anonymous institutional money manager lists 10 reasons to buy it, one of which is that he believes the market opportunity is “tremendous and underpenetrated,” with LinkedIn in a dominant position to capture far more of the estimated $85 billion market. It remains to be seen whether most of the people who bought LinkedIn today are as sincere in their belief in the company or if they’re simply waiting for a ‘greater fool’ to unload their stock on: Either way, this is likely to inflame the debate about whether or not we’re in a tech bubble — and with IPOs for the likes of Facebook, Groupon, and Zynga expected in the not-too-distant future, that debate isn’t going away anytime soon.