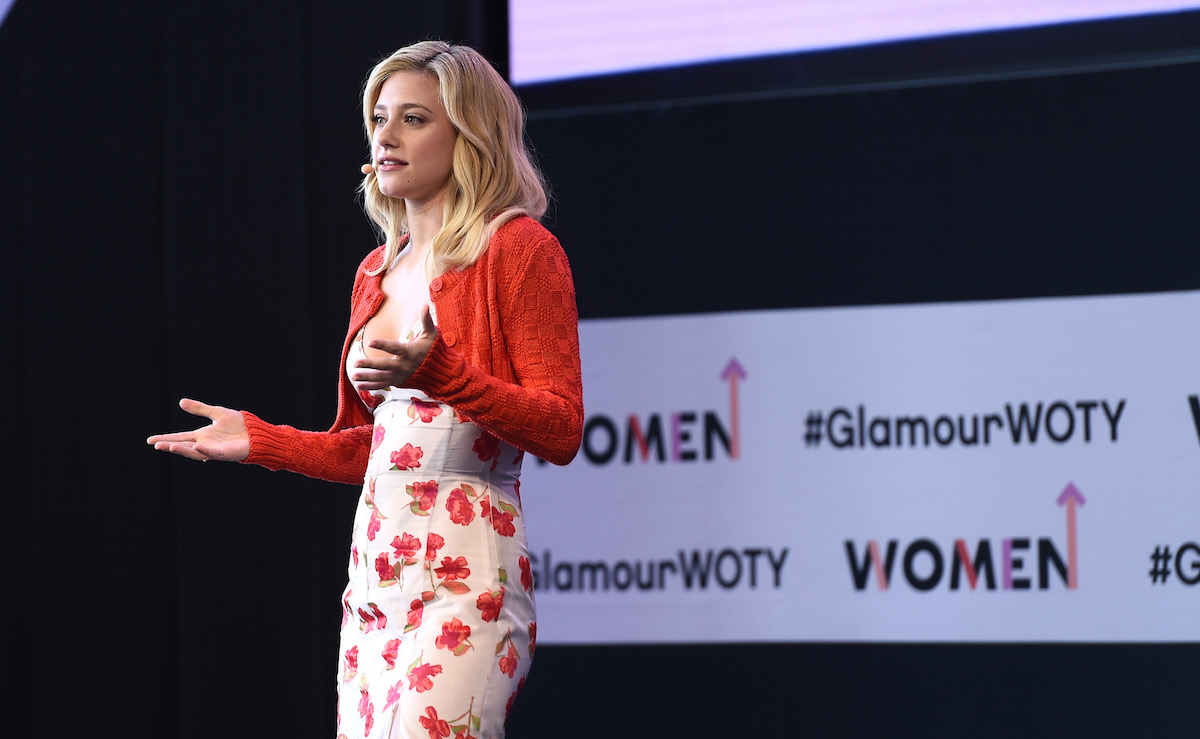 At this year’s Glamour Women of the Year Summit, Riverdale’s Lili Reinhart gave a powerful speech about body image, body dysmorphia, and the shame that can come from both.

This isn’t the first time she’s talked about these issues. She’s clapped back at fans who have speculated publicly that she was pregnant, and she’s spoken about the dysmorphia caused by her acne. Earlier this year, she said in an interview with Glamour, “My skin has caused me a lot of anxiety and sadness … I have a specific type of body dysmorphia that stems from acne. I see any acne on my face as an obsessive thing. [It’s] the only thing I can think about, and it makes me want to hide.”

In this recent speech, she says she knows that people will roll their eyes or get angry with the idea of “someone who is average size to talk about problems with weight gain.” In reality, Reinhart is far slimmer than American women’s “average” size, but her words are valid, especially in the context of an industry where public scrutiny seems to be part of the job.

“My point is, I didn’t think anything was wrong with my body until I was in an industry that rewards and praises people for having a smaller waist than I will ever have,” she said. “It felt unfair to think that I would never have an industry perfect body, just because I wasn’t genetically built a certain way. I was exposed to young women, smaller than I was, telling me that they needed to lose weight.”

So I became hyper-aware of my changing body. I could see the difference in my shape in photos and wondered if anyone else was noticing. I felt this strange, constant struggle of having to live up to the expectation of the appearance that I had already established to the world. So I found myself examining my body constantly in the mirror. Sometimes thinking … “Okay, like, I was being too hard on myself. Everything’s fine. I’m still the same size. Everything is fine.” Only go back to the mirror a few hours later… and notice that my stomach looked completely different. So I was thinking, was my reflection lying to me? How can my body look so different over the course of one day and why do I feel like I need to apologize to the world for my ever-changing self? I didn’t want the world to think I was catfishing them with my appearance or making myself out to be a certain size and shape when clearly my body was changing.

So I told myself… If I can see this change then other people can too. Reflections don’t lie. Or do they? And is that body dysmorphia? Or is this the normal part of being a woman that no one really talks about?

I think this is a mentality that will sound familiar to a lot of people, especially women—this unending scrutiny of our bodies and features, not just in physical terms, but believing that what we see in the mirror is directly tied to our self-worth. It’s painful to acknowledge that we are living with the belief that we need to apologize to strangers for our appearances, to open conversations with a disclaimer that, yes, we too are judging ourselves, so that they don’t further judge us for not being aware of what we so firmly believe they’re seeing and thinking about us.

“I think about when I have kids in the future. Will my daughter be self-conscious about gaining weight? Will she feel the need to explain her body or justify it to anyone as it changes?” — @lilireinhart #glamourwoty #riverdale

Shame and self-judgment are powerful, destructive forces. Most of us don’t know how to even begin to break them down, and the structures we have in place to help us cope are designed not to help us break these patterns, but to capitalize on them. From tabloids to beauty products, these industries profit off of our insecurities.

“I used to look at all the magazine covers near the checkout line at the grocery store when I was younger. And sometimes the cover would show a celebrity with the headline, ‘Here’s what she REALLY looks like!’ And I wanted to see, obviously. I wanted to see what was underneath and I wanted to see the flaws. Everyone wants to see the flaws of another person. Because we want to see glimpses of our own insecurities in them. We want to know that we aren’t the only ones.

“From a young age, we are unknowingly being trained by magazines, marketing, and all forms of media, into thinking that having cellulite or not wearing makeup is worthy of being publicly shamed. So there was no way in hell that as young women digesting this media, we weren’t all going to try and hide those parts of ourselves from then on. We aren’t born with these insecurities. We are told to be insecure about certain things. We are conditioned to feel ashamed or embarrassed about certain parts of ourselves.”

Reinhart doesn’t have a perfect solution to these issues. For starters, she says, “We can’t rely on those who profit from our perceived flaws to change their ways,” but by showing the sides of ourselves that make us feel less than beautiful, we can start to expand our idea of what “beauty” looks like. And by talking about our insecurities, we might be able to feel less alone in them.

“Embracing your natural beauty does not exclude anyone,” she says. “There is no fine print. You can be naturally beautiful with acne or scars, cellulite or curves. So let’s celebrate each other, and ourselves, as we are, as we will be, and as we were meant to be. Unique. Imperfect. Beautiful. And so incredibly powerful.”

You can watch the full speech here:

“Embracing your natural beauty does not exclude anyone. There is no fine print. You can be naturally beautiful with acne, scars, cellulite or curves.” – @lilireinhart #GlamourWOTY pic.twitter.com/rAtLS3pPnL