Satellites That Literally Sail on Light Get Official Launch Dates 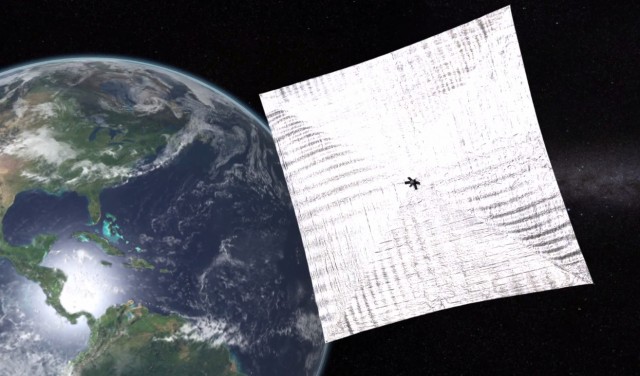 The Planetary Society has some pretty ambitious plans for their civilian-funded cubesats: They want to use light to let them maneuver around in orbit—and to other planets—completely propulsion-free. That plan will be a reality soon, because the little satellites just got their one-way tickets to space aboard some SpaceX and Air Force rockets.

LightSail-A and LightSail-B are both slightly different versions of The Planetary Society’s LightSail-1 design, which deploys a large “solar sail” and uses the pressure of photons from the sun to drive it while in orbit. Here’s a preview of how it works from visual effects artist Josh Spradling:

Japan’s IKAROS was the first satellite to fly by light, and NASA has deployed satellites that move by photon pressure in the past, but the LightSail-1 cubesats, tiny satellites, will open the door for light sailing to much smaller satellites.

The little cubesats will hitch rides aboard two SpaceX rockets over the next two years, as Planetary Society Board of Directors President Jim Bell and CEO Our Friend Bill Nye announced during a live webcast of Planetary Radio on Wednesday night. LightSail-A will go up aboard an Air Force Atlas V in May, 2015, and LightSail-B will follow on SpaceX’s Falcon Heavy launch vehicle in April 2016.

Sailing on a our solar system’s vast ocean of light is important for cubesats, because it relieves them of the need to carry fuel for a propulsion system. Not only does that mean that they can maneuver around on fully renewable energy and save some of their small form factor for other things, but it’s what allows them to share cargo room on the rockets that get them to orbit in the first place. No one wants a potentially explosive cubesat sitting next to their fancy ISS espresso machines.

It also means that they can adjust their orbit continuously and even angle themselves to swing out of orbit and off to distant locations in space just using gravity and light as fuel. LightSail-A won’t gain enough momentum from photon pressure to sustain its low-Earth orbit, and its launch will mostly be a test flight for LightSail-B, which will have full light-powered flight capabilities if all goes well with LightSail-A.

That would make it much easier and less cost prohibitive to, say, set up a satellite network around a distant planet like Mars. I mean, if we’re going to expect people to travel to another planet, we should at least make sure they’ve got abundant satellite Internet and TV access, right?