It’s no secret that cartoons are not just for kids. All of the adult cartoon shows that are now common household names (Simpsons, Futurama, Archer, etc.) stand as living proof. Heck, The Simpsons is the undisputed proof that this fact will never die, Futurama is practically undead at this point from its many cancellations and resurgences, and Archer—well, now I know how one gets ants.

This article isn’t about the ones explicitly created for adult enjoyment, but rather about those with levels of universal appeal so great that they attract viewers through either good writing and characters or pure nostalgia to a variety of ages. There are positive messages to be found in most entertainment, even when it is accomplished via negative example.

Like, “I am entertained by the character of Ursula the Sea Witch, but I realize that it is wrong to farm a sentient seaweed garden debtors’ prison on the ocean floor.” How did she even come up with that anyway? “I think I’ll go into the wish granting biz … but what shall I do with those who fail to meet my unreasonable conditions? Oh, well—I’ve always loved gardening!” Yeah, this article is also not so much about villains in particular, just … important life lessons one might learn from cartoons. Some of these are serious, others not so much. You decide. The power is yours!

1.) Scooby-Doo: The appropriate response to anyone saying, “Let’s split up!” is “No.” 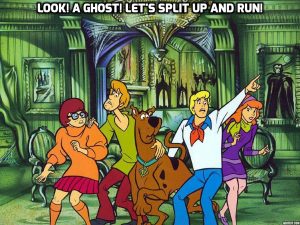 How many times did this happen? Every time the gang split up to go investigate a haunted carnival, circus, house, etc., they ended up running for their lives, eating really old food out of haunted refrigerators, and losing Velma’s glasses. So, if you’re out and about with your squad, say … exploring the wilderness, going squatching, or ghost hunting in an old castle, make a rule that there will be no splitting up. We are the Musketeers, dammit. All for one and one for all. Also, if your friend loses their glasses, then there are a few of you around to either find them for them or walk their vision-impaired self to safety!

2.) TaleSpin: Sometimes you wanna fly where everybody knows your name. Also, it’s ok to order ice cream at a bar. 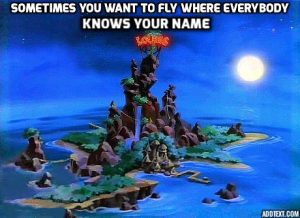 TaleSpin was my absolute favorite cartoon from the old Disney Afternoon lineup. It was well-written, the characters had lots of personality, humor, and drama, and so many of the jokes were written such that a general knowledge of history and geography were necessary to fully appreciate them. Whenever the airplanes needed to refuel or the pilots needed a good rest, they went to Louie’s Island, where it certainly looked like a bar, but instead of booze, everything was made with fruit and ice cream. I wish it was real. Sigh.

Anyway, all of the pilots seemed to go there, from commercial to private, and from other countries as well. Louie’s was neutral ground with ice cream, and I think that’s special, dang it. This knowledge came in particularly handy when I was at a convention with a friend, who desperately wanted ice cream. It turns out, bars make amazing chocolate shakes!

3.) Avatar the Last Airbender: Here’s how to handle a breakup. 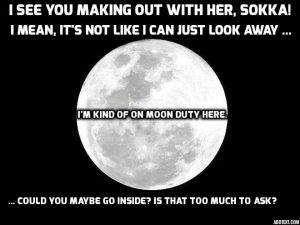 Sometimes, the universe just hates you. You thought you’d be together forever. You were finally happy. Then … your girlfriend tells you she has a sacred duty to become the moon. You’re upset, but who are you to change fate? And, if she doesn’t do it, the raging tides will probably kill you anyway, right? Sokka, in true Sokka fashion, rolled with it and learned to deal. Though … I wonder if he felt weird for the rest of his life about kissing anyone outside while the moon was out. This plot line allowed for the now-famous exchange between Zuko and Sokka:

4.) Darkwing Duck: You can be a single parent AND a superhero! 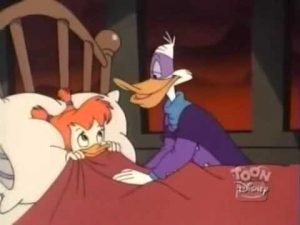 Worried you’ll have to give up saving the city from dramatically named and costumed supervillains because a child happened to you? Nope. It’s cool. Drake Mallard adopted Gosalyn, became a single father, and remained the Terror that Flaps in the Night. You really CAN have it all. Batman should take a note from Darkwing Duck’s example. You can be a good father figure AND a hero, Bruce Wayne. You don’t actually have to be distant, exacting, and brooding! So, take Robin out for some freaking pancakes and ask him how his day was sometime, could you? Sheesh.

5.) Adventure Time: Be kind to people. Their story might surprise you. 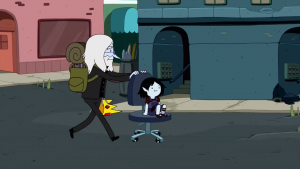 So adorable. So sad. (image: Frederator)

In Adventure Time, the character of the Ice King is initially played for inept villain laughs. Only after a bit of a time investment does the viewer discover that Ice King has a heartbreaking backstory. His mental state is affected by the crown that gives him his ice powers, causing him to forget even his own name. Before he lost his memories, he rescued and raised young Marceline and it is implied that her love of music comes from him as well. If you want to cry your eyes out, watch this video clip from the show. After Marceline tells them about the Ice King, Finn and Jake treat him notably better and refer to him as Simon, his given name, a lot of the time.

6.) Gargoyles: A little time travel can make anyone a “self made man.” (Especially if you go back in time to give yourself the means to succeed.) 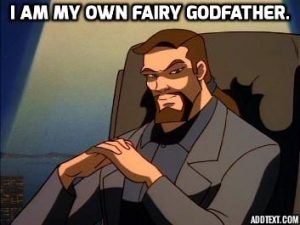 I mean … hindsight is 20/20? If Future Me could work with Past Me to pull a Xanatos Gambit to ensure my own success, I’m sure both of us would be up for it! Present Me certainly is! He had sworn to his father that he would someday be a self-made man and be rich. After arranging time travel for his wedding party (I’m still failing to see a downside here, but I do have a bit of a villain crush on Mr. Xanatos …) he arranged for ancient coins and instructions on how to get rich from them to be delivered to himself in the past. He’s basically his own fairy godfather, and he consorted with actual Fae. I suppose a more practical application of this lesson might be to not forget about Past You or neglect to think of Future You as Present You goes about their daily lives. Or literally time travel. You pick.

7.) The Secret World of Arrietty: Leave a little sugar out for the tiny people who live in your walls. 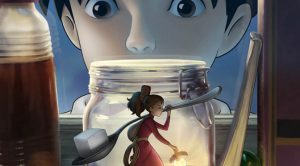 As a kid, this type of story filled me with excitement. As an adult, it still kind of does. If you secretly hope that there are Borrowers living in your walls, just leave a little sugar cube or a chip or a nice pin out for them. When things just disappear, I pretend the Borrowers took them. I bet they got several sets of clothes and sheets from that blouse that was spirited away (Ha! Ghibli joke!), and when you could just swear that you laid a chip clip on the counter and now it’s gone? It’s a hair clip now. For a tiny person who lives in your walls.

Are you looking for an actual practical application for those who are not hoping that a society of tiny beings is living off of our discards? Uh … you catch more tiny wall people with sugar than you do with vinegar? I mean, unless vinegar is what they’re out to borrow, that is …

I just love it, okay?

8.) Steven Universe: Families come in all different shapes and sizes, and that’s cool. 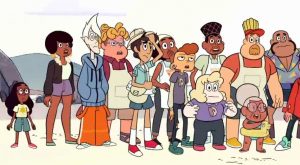 Steven is raised by three mother figures, his own deceased(ish) mother’s best friends, who are also alien superheroes. Steven is also co-raised by his father, Greg. Meanwhile, Sadie has her overbearing but well-meaning single mother, Barb. Connie has a mother and father, but the Pizza sisters don’t seem to have a mother, just their father and grandmother. Vidalia and Yellow Tail are married, but Sour Cream is the son of her previous relationship with Marty. The characters on the show are a lot closer to the reality of what most families are like these days. For a show about alien rock women and their half-human adopted son, there is a lot of family diversity going on in Beach City. Keep Beach City awesome! 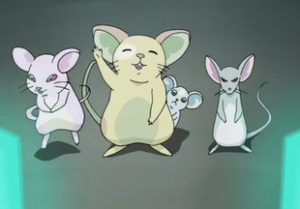 Not only are the Space Mice one of Allura’s only links to her lost home, they are also kinda telepathic and take instruction well. Very useful creatures, telepathic Space Mice. You never know when you’ll need to have your little friends crawl into spaces too small for larger humanoids to enter. Also, they’re good little spies that will tell you what your friends have been up to with adorable mousie antics. Metaphorically speaking, there is a lot to be said here about the different ways different people can make a difference. These guys may be small, rodential, and cute, but they pretty much took down a castle-squatting Space Commander.

I loved this movie. The music is gorgeous, the writing is clever, and the characters are relatable and interesting. So many positive messages in one movie, but my personal favorite aspect was the sense of adventure, the longing to explore, to find out and know. Moana’s determination to follow the call of the sea (or the call of her own heart), for the purpose of discovery, self-discovery, and that burning desire to see new things and understand the past—that’s the part that speaks to me.

An important lesson to take away from Moana is that fearing the unknown only keeps us rooted in a life of going through the motions to please others. There needs to be a balance that encourages exploration—figuratively and literally. Although, taking your pet chicken out for a sailing adventure might not be the best idea in real life. What if they peck a hole in the life raft? Yeah, you’re welcome.