Life is Strange: Before the Storm Continues the Game’s Tradition of Turning Teenage Angst Into Superpowers 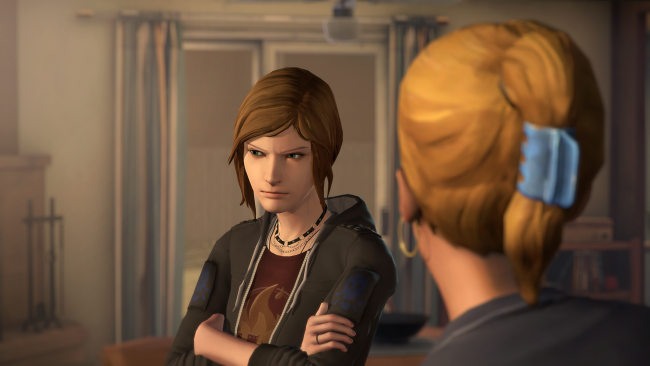 The designers of Life is Strange and Life is Strange: Before the Storm have managed to turn some of the most maligned stereotypical teenage habits into superpowers.

For example, in the original Life is Strange, players inhabited the role of Max Caulfield, a young teenager who discovers she has the ability to rewind small bits of time. Eventually, she discovers that by meddling with time, she’s brought about a disastrous storm that threatens to destroy her seaside hometown of Arcadia Bay. But before that discovery, she uses her powers to not only solve a rash of disappearances that plague the town, but also to rekindle her friendship with Chloe Price, her estranged best friend.

In Life is Strange: Before the Storm, players take on the role of Chloe in a prequel to the events of Life is Strange that explores the whys and wherefores of her life before Max returns to Arcadia Bay with time-rewind powers in tow. Here, though, Chloe’s given a “power” of sorts in the form of a “backtalk” mini-game that has Chloe firing back and lashing out at her mother, her mother’s boyfriend, principals, other teenagers, and even random strangers in order to basically get what she wants out of a given situation.

At the risk of turning this into a bit of a navel-gazing essay, I’ll say that I can see my past self identifying hard with Max, moreso than anyone else. I don’t know about you, but as a teenager, I spent a lot of my time thinking about everything that I had done that carried me up to that point in time. I mused on what it might have meant if I had made different choices at certain junctures in life: where would I be if I told this person I liked them a long time ago, what would I be doing if I actually applied myself in school, who would I be if I came out earlier in life? With Max, we find that there’s value in spending time dwelling on the past, that it’s okay to look back and day dream about what may have been. It’s not always going to be a joy to do so, but even in the most painful recollections, we find meaning. We find fulfillment.

But in playing through Before the Storm, I find that Chloe’s backtalk “power” is easily something I know I’ve done in the past. I’m not going to say that I sassed my way into a secret underground concert (I was too much of a goody-two-shoes for that), but I’ve definitely found myself at odds with other people, left with only anger-fueled words to get them to see things my way.

My point is this: I think, that despite the game’s at times corny dialogue and sometimes stilted writing, it has managed to dredge up these memories, these connections I never thought would exist between my own life and a video game. And while I have qualms about the first game being written by a group of men (not that men can’t write convincing stories about teenage girls, but still, bring on a consultant maybe), I think that both games manage to take these stereotypically teenage habits and turn them into something more, infusing them with that sense of empowerment that comes with simultaneous escapism and unbound anger at the world, two things that I know are emblematic of at least my own adolescence.

But of course, no power comes without its downsides; Max’s time-rewinding brings down a storm that destroys the town of Arcadia Bay (if you choose), and the consequences of Chloe’s sass are merely alluded to at the end of Before the Storm‘s first episode. In Chloe’s case, we’ve yet to see how this plays out for her in the subsequent chapters, but it’s clear that Things Are About to Get Real. And while we know we’re more or less being railroaded towards the opening events of Life is Strange, we’re given this sense of agency, of choice, much like how Chloe and Rachel jump from the train they hopped into after ditching school.

There’s an end—a very tragic end—in store, and though it is inevitable, it’s not going to change the fact that we, as players, will do our best to rail against the game’s structure as much as we can in order to prolong whatever joy we can for these two characters. In some small way, it’s like being a teenager all over again; every moment counts, and nothing ever hurt quite as bad as we might be hurting right now.