Really: To Prevent A Threatened Closure, Library Gets Rid of All of Its Books 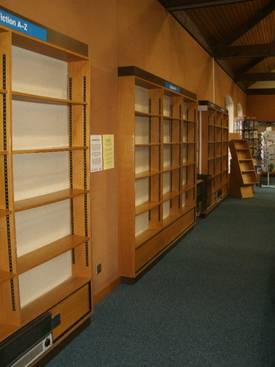 Hey, how about a fun story about budget cuts? What if it includes the complete and total emptying of an entire library?

The British Parliament recently decided to make cuts to local budgets so they can give the banks bonuses, something they’d said they wouldn’t do. So naturally, non-government officials were upset by cuts being made to their communities (and blatant, though not unexpected, hypocrisy), specifically library closures. The Stony Stratford council found out about the possible closure in December and sent letters to 6,000 townspeople, telling them that while the threat of closure was only a threat, it was time to prove how crucial the library was to the community. So then began the Facebook campaign to prove said point.

The library in Stony Stratford successful convinced its patrons to empty their library’s shelves, checking out approximately “16,000 volumes,” to show what a void the closure would leave in the community. The maximum amount of books one person could take out was 15. And ahead of their deadline of closing time today, all the books were gone.

According to the Guardian, the last few books lent out were self-help books and practical mechanics books. But they were checked out, and now the library staff are dusting the shelves. Robert Gifford, chair of the Stony Stratford town council (who showed up too late to check out any books for himself), ran into a man on the street who told him, “The library is the one place where you find five-year-olds and 90-year-olds together, and it’s where young people learn to be proper citizens.”

Most famous for its pubs, the Cock and the Bull, Stony Stratford’s claim to fame is originating the expression “a cock and bull story.” Maybe now they can coin a new expression for community efforts. “Shelf clearing”? “The community got together for a shelf clearing to protest the closure of the local nature walk. Locals say that officials are giving them a cock and bull story about litter on the trail.” Maybe? Maybe not. But the sight of an empty library because it’s thriving rather than closing is pretty inspiring.