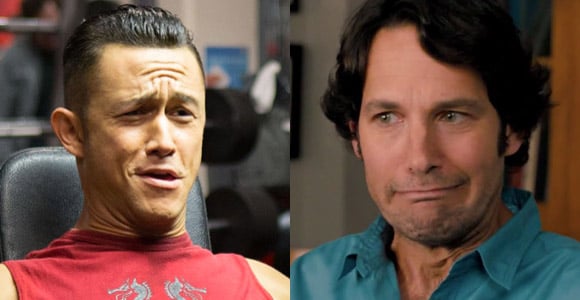 When I heard Joseph Gordon-Levitt and Paul Rudd were up for Marvel’s Ant-Man, my first thought was, “No contest!” Are we thinking the same thing? Hit the jump to find out.

Out of these two, Rudd is the only possible choice in my mind. I appreciate Gordon-Levitt, but not for this particular role.

Director Edgar Wright has been teasing us now and then with bits of information on Ant-Man but I believe this is the first time names have been floated for the title character in any real way. Variety writes:

Sources tell Variety the two actors who have emerged as front-runners to land the title role in the superhero feature are Joseph Gordon Levitt and Paul Rudd. Insiders warn there’s still a remote possibility another actor could emerge but as of now, Gordon-Levitt and Rudd are the main contenders for the film.

Considering Wright is the director of Simon Pegg’s Shaun of the Dead, Hot Fuzz, and The World’s End trilogy, plus Scott Pilgrim vs. the World, I’d wager Ant-Man is going to be the most comedic of the Marvel Universe films so far. So for me, Rudd is the better option of the two. That being said, we’re still not sure as to the direction of the film. Variety poses something interesting on this front as it pertains to the actors:

In the comics, the character’s alter-ego was Henry Pym, a brilliant scientist who invented a substance that allowed him to change his size and communicate with insects. One scenario that was rumored early on when Wright first came on is that he would focus on the later years of Ant-Man and add Scott Lang, a crook who steal Pym’s technology and becomes the new Ant-man which may also hint at the idea that both actors could potentially become involved in the film though this idea as of right now seems unlikely.

[UPDATE] /Film has a blurb from a recent interview Gordon-Levitt did with a French website who asked him about Ant-Man specifically:

“There are always rumors. I talk a lot about my future projects, so if you haven’t heard me talk about it, it means it’s nothing but a rumor,” he said. “People like to write about [rumors].” Gordon-Levitt also added that reports of his having passed auditions or screen tests for the role were “nothing but lies.”