Let’s NOT Do the Time Warp again, Rocky Horror Fans. 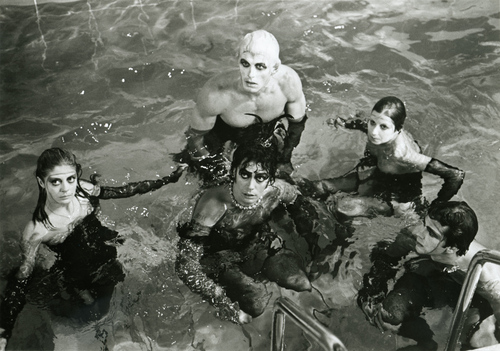 Recently, I read the news that Laverne Cox has been cast as Dr. Frank-N-Furter in a 2016 remake of The Rocky Horror Picture Show.

I am very, very unhappy about this.

Full disclosure: I’ve never gone to a RHPS showing. The idea of being subjected to some kind of sexualized humiliation hazing ritual sounds like a personal hell to me, and in spite of being pressured to go multiple times in the past 15ish years, I managed to avoid it completely. This is not to say I’m not familiar with the show; I know many of the callbacks and hear the Time Warp at every single geek dance I go to, gog help me. But I’d never seen the movie front to back, either in an audience or at home.

Spurred on by the remake news, I finally sat down and live-tweeted all the way through the Rocky Horror Picture Show movie, suffering protestations that I’m watching it outside of the social experience and protestations (from my fiancée) that I was watching it at all.

Now that I am officially a Rocky Horror Expert, I feel confident saying: This movie is awful and we need a remake of it like we need a Roland Emmerich Stonewall movie.

Dr. Frank-N-Furter is not an example of positive queer representation. He is a ton of shitty, old-fashioned queer exploitation stereotypes mashed into a single character. He’s a vampy, cruel, selfish, abusive, violent murderer and rapist. Y’all, he rapes people and keeps sex slaves. Not a role model.

I understand that RHPS was integral to the coming-out stories of a lot of my queer friends, even some trans ones. I realize that some people, decades ago, looked at Frank and saw a brave, unapologetic gender-nonconforming person with brazenly displayed sexuality, and they said, “Hey, I can do that?”

That’s not what young-me saw when I looked at Frank and characters like him. I saw a cruel, unapologetic gender-nonconforming person, grossly over-sexualized and inconsiderate to others, and I said, “I can’t try to be a woman – people will think I’m him.”

Characters like Frank set the tone for queer characters in media for decades, as well as the conflation of transgender/transsexual women and transvestite men. To this day, transgender women like me are thought of as inherently sexually aggressive, our gender identity based in fetishism.

Having a transgender actress play a male transvestite is closely emulating a preexisting misconception about trans women. Trans women are conflated with cross-dressers and drag queens all the time; it’s part of the reason that many trans women, especially younger ones, are uncomfortable with drag. I was surprised to find when I voiced my stance that I was far from alone – many of the trans women I know immediately piped up with their discomfort regarding RHPS. Some thanked me for articulating what they couldn’t. Though perspectives were different, one thing was always common:

This character’s portrayal is extremely fraught for many trans women.

Everything about Dr. Frank-N-Furter is an awful queer stereotype that I don’t want to see portrayed by arguably the most well-known trans actress in the world. To make him okay, they’d have to utterly rewrite the premise of the show from the ground up, and if they did that? The die-hard fans would ditch the movie, and it’d bomb.

I really can’t trust Laverne on this one. No matter how much she wants to make the character work, the well is too poisoned for this to be anything but a terrible idea.

And, dear friends who are Rocky fans: please know that your fave is problematic. It’s okay that you still like it… but please don’t prolong it. Don’t try to revive the zeitgeist. It’s only going to hurt people you care about.

Afterword: I originally posted this article on tumblr on October 22nd, but evidently I struck a chord. It’s gotten far more attention than I expected it to, and I had no idea how much RHPS had hurt other trans women when they were younger.

I’ve now heard well over a dozen stories of people like me — some friends, some strangers — who felt repulsed, hurt, scared, and traumatized from seeing this movie and the activity around it. I’ve been told by several people to see RHPS in the context in which it was released or as a historical piece, but it’s becoming clear that even decades ago, the representation of Dr. Frank-N-Furter was hurting people.

I still recognize that for some trans women and for many cis MOGII people, this was a valuable phenomenon. This is likely true of the creator too, who has come out as nonbinary transgender in the last ten years. But the many responses I’ve gotten from people, the anecdotes I’ve heard, and the thanks I’ve received for writing this essay make it clear: we’re done. It’s time for Rocky Horror to do the Time Warp into obscurity.

Caelyn Sandel is a game designer, fiction author, and occasional essayist. Most of her writing is socially aware science fiction, fantasy, and horror. Her work can be found at her website, inurashii.xyz.