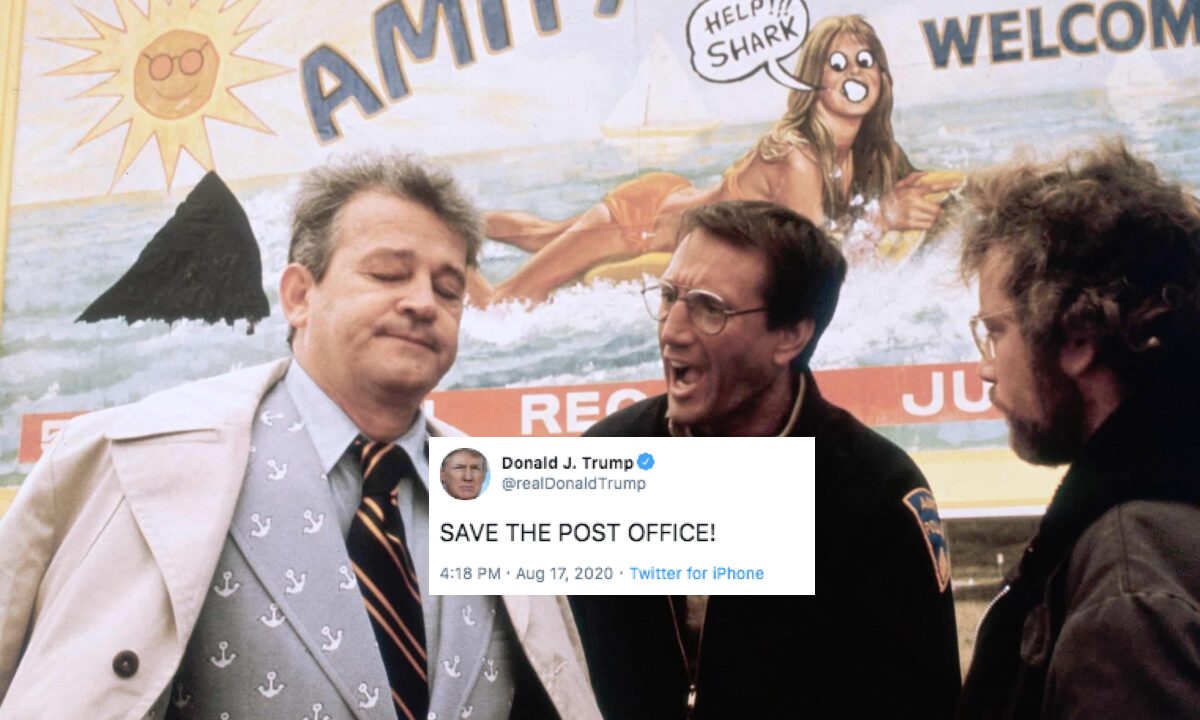 I often make the mistake of saying that I can’t be surprised by anything Trump does anymore. Then the president tweets something so absolutely mind-boggling that your jaw drops, and we’re all meant to somehow just live through it. At current, if you weren’t aware, the president is trying to defund and undermine the U.S. Postal Service because he’s (rightfully) terrified that widespread voting by mail would see him voted out of office—possibly in a landslide.

Now though, don’t you worry! After months of blatant attacks on voting by mail and the appointment as Postmaster General of a major donor, Louis DeJoy, who’s doing things to hurt mail delivery like removing sorting machines and mailboxes, and eliminating overtime for postal workers—Trump is suddenly … attacking his own policies? Mere days after declaring that he’s refusing to fund the USPS in order to sabotage universal mail-in voting, Trump just tweeted “SAVE THE POST OFFICE” as if he isn’t the one behind it all. What?

Truly, I’ve never read a tweet and felt like I was spiraling into bizarro land in the way I did reading that. Like … who does he think he’s fooling? Once again, who actually believes that he wants to “save” the U.S. Postal Service when he’s openly admitted to undermining the USPS to make it harder to vote?

It’s like the Joker tweeting “SAVE GOTHAM CITY” or the shark from Jaws responding “SAVE THE BEACH GOERS.” It’s pure madness, and this is the man “in charge” of the United States right now. So much so that everyone flocked to Twitter to point out that this is the villain basically saying “SAVE THEM.” This is Thanos saying “SAVE TONY STARK!”

Imagine a doctor choking you while calling for a doctor. https://t.co/xAH3kJXOte

The scuba diver who stole Nemo from his dad: FIND NEMO https://t.co/BbD5of5tXg

sometimes i feel like i am going completely and utterly insane https://t.co/QVZDycWcpI

hannibal lecter saying “SAVE ALL THOSE PEOPLE SOMEONE ATE!” https://t.co/g3vRLBYA7G

This is like Bowser saying SAVE THE PRINCESS https://t.co/Fk7a4Atfs7

This is a joke, right? He’s making a joke? https://t.co/ZhkJgXfIj5

This tweet is the work of someone who is so disconnected from the reality he created that he thinks he can act like it’s opposite day and no one will care. I’d hazard a guess that Trump has noticed some of the outcry over the post office slowdowns—resulting in truly awful incidents like life-saving medicine deliveries getting delayed—and he hates when his “ratings” dip. Maybe someone showed him a chart today that the USPS has a 90% approval rating with the public, so he’s just wildly trying to cover every side imaginable? But this is still like if Norman Bates tweeted “STOP KILLING PEOPLE IN MY MOTEL” out into the universe and everyone knew it was him behind the killings. And we just all have to sit here and watch like a car crash we can’t look away from.

So, support the U.S. Postal Service in whatever way you can. Buy stamps from them, go to their store and purchase some fun things just to give money back to the USPS, since we’re literally living in The Postman without anyone to help us.