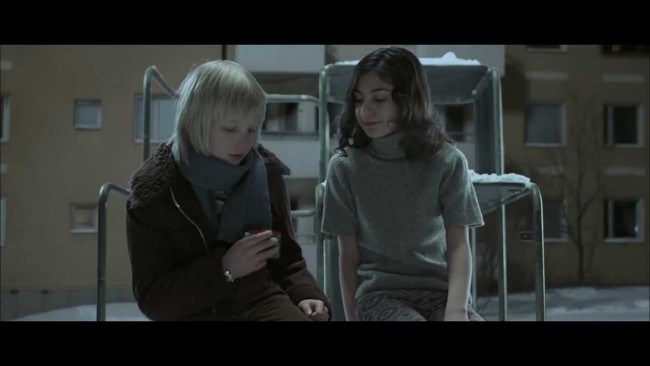 TNT is ordering a pilot of based on Let the Right One In, John Ajvide Lindqvist’s vampire novel that was previously adapted by director Tomas Alfredson in 2008. While this TV adaptation has been in the works for a while, and even being developed at A&E for a while, the deal is now finalized. Let the Right One In centers around the complex relationship between a young vampire child and a bullied 12-year-old boy.

There’s definitely some hesitation when it comes to this adaptation, as the Swedish film balanced the story so well between drama, romance, horror, and coming-of-age. The pacing and subtlety of it might be attributed to the fact that Lindqvist wrote the screenplay for the critically-acclaimed Swedish film, cutting down many minor characters and subplots. Elements like Håkan’s relationship to Eli and Eli’s gender became more ambiguous in the film, creating many silent and intimate moments that hint at a wider world without patronizing the audience—something that felt rare and original in a genre that’s prone to melodrama. While a television format might give the series more space to expand on the story, we’ll have to wait and see the final result. There’s no news on the casting front yet, but the new leads definitely have some big shoes to fill.

Jeff Davis of Criminal Minds and Teen Wolf will pen the script and executive produce alongside a team that includes Aquarius‘ Marty Adelstein and Becky Clements, and Hammer Films president Simon Oakes, who also produced the 2010 American version Let Me In, which starred Chloë Grace Moretz and Kodi Smit-McPhee. How much the series will borrow from the movies is yet to be seen, but it’s been revealed the new adaptation will take place in Vermont, rather than Sweden or New Mexico. Sarah Aubrey, EVP of original programming for TNT says:

This novel is a watershed of rich storytelling, making it an abundant source from which Jeff, Marty, Becky and Simon will bring to life in this all-new adaptation.

Are you looking forward to seeing a TV adaptation of this horror favorite?

(via io9)
Want more stories like this? Become a subscriber and support the site!

Let the Right One InTNTVampire