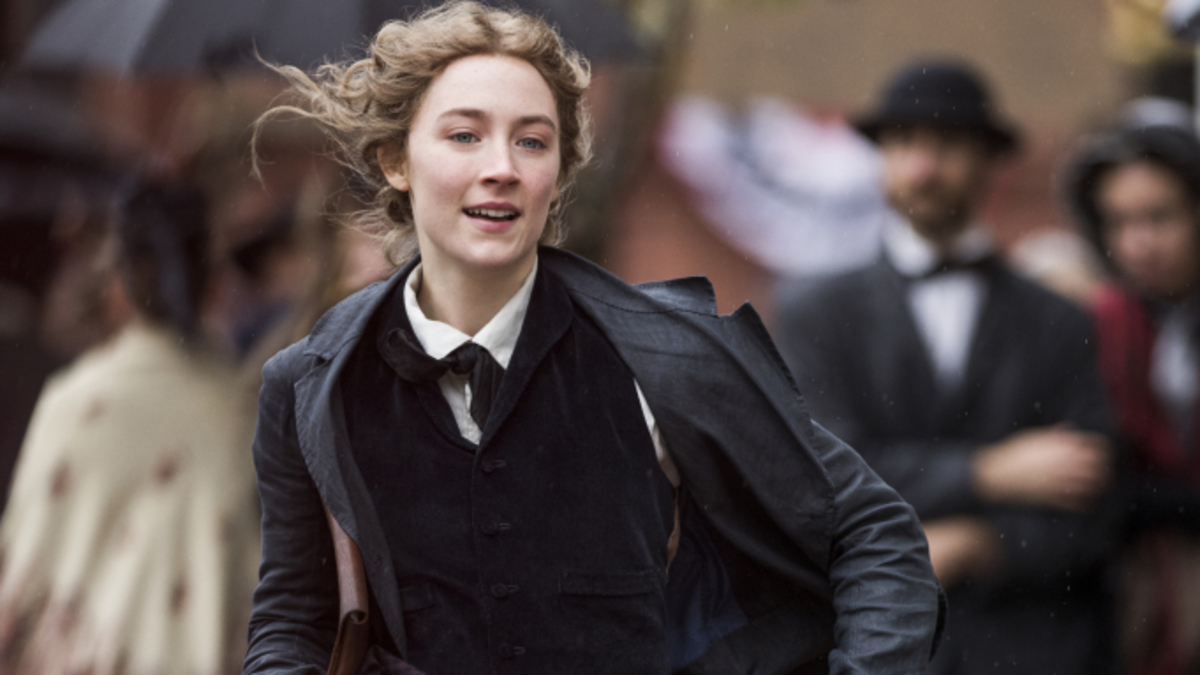 Like so many women and girls, I’ve always seen myself in Little Women’s Jo March. I grew up with her as Katherine Hepburn or June Allyson or Winona Ryder. She was one of those characters that I didn’t want to be—rather, she was a character I already was. She was a misfit, a rebel, too smart for her life and already so done with the restrictive gender roles.

Jo was creative and wild and messy. But she did things I didn’t understand, of course: She turned down romantic but useless Laurie and the married … some random professor? I didn’t get until I was older why neither of these story beats made sense completely until I realized something else about myself and about Jo: She’s gay.

Jo March is an enigma as a romantic heroine, rejecting one proposal and falling for another man when she’s said all her life she won’t marry. But as a lesbian, she’s an icon … and the end of her story becomes a tragedy of societal constraints and meddling with her author.

Think about this. Jo never feels quite right in her world. She doesn’t want to marry and she’s an early icon of soft butch style, really. If you think about her in these terms, her turning down Laurie makes far more sense. She loves him as a brother but not ina romantic or sexual way—because she’s queer.

It may feel reductionist to peg a tomboy as a lesbian, but it’s not just the fact that Jo is a tomboy that makes me believe she’s queer. It’s everything about her, from the way she adores women and rejects the idea of marriage and men in general, to her feeling of loneliness in a straight, heteronormative world. She’s so much more than her era allows her to be, and that includes being queer.

This also makes the most sense when you think of Jo as a literary version of her author, Louisa May Alcott, who herself never married and was probably actually queer in some way. She’s famously quoted as explaining her spinsterhood by saying: “I am more than half-persuaded that I am a man’s soul put by some freak of nature into a woman’s body … because I have fallen in love with so many pretty girls and never once the least bit with any man.”

So how does that mesh with the fact Jo does marries a man? Well, because that wasn’t part of Alcott’s own story and I don’t think it’s really the story she wanted for Jo.

Little Women is an ouroboros of a book. It’s about Louisa May Alcott and about itself. It ends with its own creation … but only in part. Little Women as we know it is actually two stories. Little Women is the first part that we love so much and the second part, one that seems to bad added on under pressure from outside forces, is Good Wives. They were published a year apart and Good Wives feels almost spiteful in its character resolutions, and illogical even when it comes to Jo.

This is something that Greta Gerwig’s new version of the story attempts to grapple with: the idea that the author of Little Women (Saorise Ronan) was pressured to marry off her heroines against her will, which calls into question the reality of the ending. This is a good addition in an otherwise pretty faithful adaptation, but I wish it had gone further and given us a Jo March who was finally allowed to be what so many of us know her as: a lesbian.

And wouldn’t that be a better reason to revisit this text? I found Gerwig’s film to be well-made but her decision to start in the middle of the story and tell the March childhood as flashbacks felt unnecessary and confusing at times. But other than the timeline and the way the film portrays Amy as a far stronger and more complex character than she has been before, it doesn’t justify its existence in comparison to other versions; especially the 1994 version as directed by Gillian Armstrong, which has far more heart and warmth than Gerwig’s adaptation.

But if this had given us a Jo that was unabashedly queer, who met a woman to love and end her loneliness? That could have been transcendent. Instead, we have another adaptation that just stays on the same path as those before it, a path Louisa May Alcott may very well have not wanted. I would have far preferred if a new Little Women had been explicit in showing Jo’s “marriage” as an economic move and given us a different, better, gayer reality for her.

But alas, this isn’t the version we got—this time. But there will be other versions, I’m sure, and maybe in the next one, Jo March will be allowed to finally become the lesbian icon she was always destined to be.