On The Importance Of Leslie Knope, Friendship, and Feminism 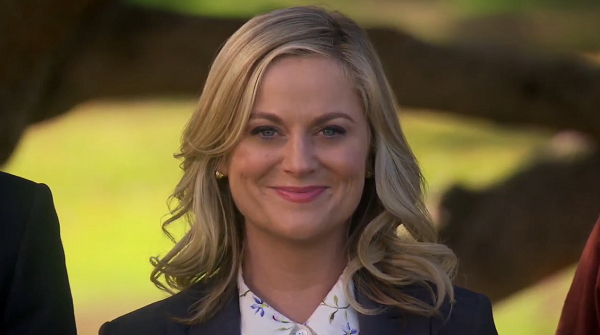 There are some things that I will defend with my life about Parks and Recreation: that Donna Meagle is an inspiration for all women; that the Leslie/Ann friendship is unsinkable and beautiful like a butterfly; that April Ludgate was the best thing that could have possibly happened to Andy Dwyer. Parks and Rec ended less than a week ago and I can safely say it was one of the best series finales in television history. Getting to see peeks into everyone’s futures (including the rest of Mayor Garry “Larry, Jerry, Terry” Gergich’s very happy life) was immensely satisfying. I’m left feeling grateful for a show that celebrated diverse characters and many wonderful friendships and marriages alike. But more than that, I’m grateful for Leslie Knope.

When I first heard about The Office’s Greg Daniels and Michael Schur creating Parks and Recreation, my main concern was that they were just making a female Michael Scott. I didn’t want to see a female protagonist in a mid-level position in government be totally bad at her job just like Michael and not have the respect of her peers just like Michael. And sure, the first season (which was only six episodes yet felt longer) did have some of those moments, but there was clearly an effort by the writers to have her passion be in the right place.

Ultimately, Leslie Knope as a character evolved into that unicorn of sitcom writing — a hilarious, competent female character treated as competent by her peers. It’s amazing, right? It’s amazing that this character exists without the writers undermining her intelligence. Some of that is obviously the show’s great writing, but it’s in no small part also due to Amy Poehler’s brilliant performance over the past six years. Through Poehler’s energy and bright smile, Leslie is a tenacious problem solver, one that often has to think outside the box to get the job done. She is all about solving the issue without betraying her own code of ethics, which in politics is always a tough job.

Unlike Michael Scott, she’s better at reading what people want (as Ron finds out, Leslie is the best gift giver) and while she occasionally gets lured into doing things for praise and admiration, her main motivation for any one task at her job, big or small, is wanting to help people. It is firmly established by the end of season two that she was considered indispensable to those who worked with her, perhaps best seen in that season with Ron standing up for Leslie when her job is almost cut due to the budget. When told that every department in Pawnee was “going to lose a Leslie Knope,” Ron firmly replies, “They are not. No other department has one to begin with.” Later, when Ben appeals to the Chief of Police for a favor for Leslie, the Chief agrees immediately. When asked why he said yes so quickly, the Chief simply answers that Leslie is “the kind of person who uses those favors to help people.”

Leslie also loves her friends. She loves the women in her life, to the point where she created Galentine’s Day as a reason to celebrate her female relationships. Through Leslie, Parks and Rec became a show that itself celebrated women and their friendships.

Leslie fails, too. She fails hard. She wins the election for City Counsel and despite doing the best job she could, gets recalled because the town sees all the progress she made as negatives. But she’s respected by the people who really matter to her and her friends love her. And losing the recall means getting the chance to do something even bigger. She ends up using her talents not just develop parks in Pawnee but throughout the nation. And that’s not even the end of her story!

But Leslie doesn’t live in a bubble, and you can’t really talk about Leslie Knope without talking about her relationships with the other characters in the show. The finale seemed to know that, since one of the special aspects to the last episode was getting to see little snippets into nearly everyone’s futures, and the writers used Leslie hugging or touching that person as the narrative device to start that particular fast forward. It was a nice reminder throughout the finale of how Leslie has touched the lives of her friends and coworkers over the time of the show.

And Leslie has changed them, hasn’t she? The beginning of the series was filled with the main cast dismissing Leslie more often than listening to her. Obviously this came with the writers not knowing the characters yet, but that also gave Leslie many chances to prove herself, not just to her coworkers but also to us as the audience.

In the pilot, April’s main scene depicts her and Tom laughing at embarrassing photos of Leslie falling in the pit. By the time of Leslie’s recall, April tells her boss more than once that she hates how the town has let Leslie down, how Pawnee doesn’t appreciate all the good Leslie has tried to do for them. Ann is also highly skeptical in the pilot—her very first lines involve her explaining how she doesn’t trust the local government to do anything right. Not only does she discover a lifelong friendship with the most pro-government woman on the planet, but she also ends up working for the government herself and embracing Leslie’s can-do attitude. Ron and Leslie’s friendship is perhaps the most extraordinary, especially in the way they support and advise each other through the course of the series. The bottle episode “Leslie and Ron” from this past season highlighted that especially, as did their moments in the finale.`

The show was also really good about showing Leslie learn from her peers as well. How many times did one of her coworkers give her a moment of clarity? We saw Ron help her put a disappointment in perspective and Ann help her trust in her feelings for Ben and Donna let her know she admired her. This all added to Leslie growing both as a person and a more confident civil servant. The writers allowed her to grow and for those lessons to stick.

All of the main cast of characters affected and were affected by Leslie, but perhaps none so much as Ben Wyatt. It’s sort of universally accepted by fans that Parks and Rec found their sweet spot around the time Ben and Chris were introduced in the show at the end of season two. It’s funny now to think that Ben, played so well over the seasons by Adam Scott, starts out as a sort of adversary for Leslie, the guy she hates before he even comes into town because he’s there to slash their budget. Little did she or the audience know that he was going to become her 2nd best friend (the closest anyone comes to the Ann/Leslie friendship level) and the person she’d spend the rest of her life with. “I love you and I like you” still gets me choked up.

It’s not just that Ben loves Leslie but why he loves her. Season three’s “Flu Season” is about Leslie getting deliriously sick right before she has to give a big speech to potential vendors for the Harvest Festival. Ben is convinced that she’s too sick to even speak coherently (since at this point she’s hallucinating that the ceiling and floor had switched places), but then she gets up to speak and knocks it out of the park. No one knows she’s sick, let alone talking to a painting just moments before, and they are successful in getting the vendors they needed. An in-awe Ben says, “That was amazing! That was a flu-ridden Michael Jordan at the ’97 NBA finals. That was Kirk Gibson hobbling up to the plate and hitting a homer off of Dennis Eckersley. That was… that was Leslie Knope.” And he smiles.

That pause in his praise is the moment Ben falls in love with her.

Leslie Knope is the traditionally “difficult” woman, where “difficult” means that misogynist jerks don’t want to deal with women like her. She is outspoken and passionate and she doesn’t want to take no for an answer when a “yes” can mean that people’s lives get better. Ben doesn’t just accept those things about Leslie — he loves her for them. Ben is a nerdy male feminist, one of the few I’ve ever seen portrayed in popular media, and he loves his wife and supports her no matter what. It’s not just that they have a love of politics in common — they are a team and he’s just as willing to give up something for her as she is for him. The “Pie-Mary” episode from this last season particularly highlights their combined Knope/Wyatt feminist stance (with some nice jabs at MRAs, too), but you can see it throughout their entire relationship. They have one of the healthiest marriages ever put on television, culminating in the last few minutes of the finale when Ben tells Leslie she should run for Governor even though both of them were approached for the job.

And she wins. The flash forward in the finale shows that Leslie Knope eventually becomes Governor of Indiana and while the episode keeps it vague, there are some large hints that she ends up becoming President. If you had told the viewers tuning into the pilot back in 2009 that the lady pushing a drunk through a slide with her broom to get him off a playground was going to end the show as the leader of the free world, they probably would have found it far-fetched. But throughout the seasons and over the course of 125 episodes, we’ve gotten to see a female character that embodies everything we want out of a politician but never seem to get. Beyond that, we’ve gotten to see a funny, competent and endearing heroine in a genre that rarely lets characters like that shine without undermining their strengths.

I’m going to miss this show.

Katie Schenkel (@JustPlainTweets) is a copywriter by day, pop culture writer by night. Her loves include cartoons, superheroes, feminism, and any combination of the three. Besides The Mary Sue, her work can be found on Panels,  CliqueClack, and her own website Just Plain Something, where she hosts the JPS podcast and her webseries Driving Home the Movie. She’s also a frequent TMS commenter as JustPlainSomething.