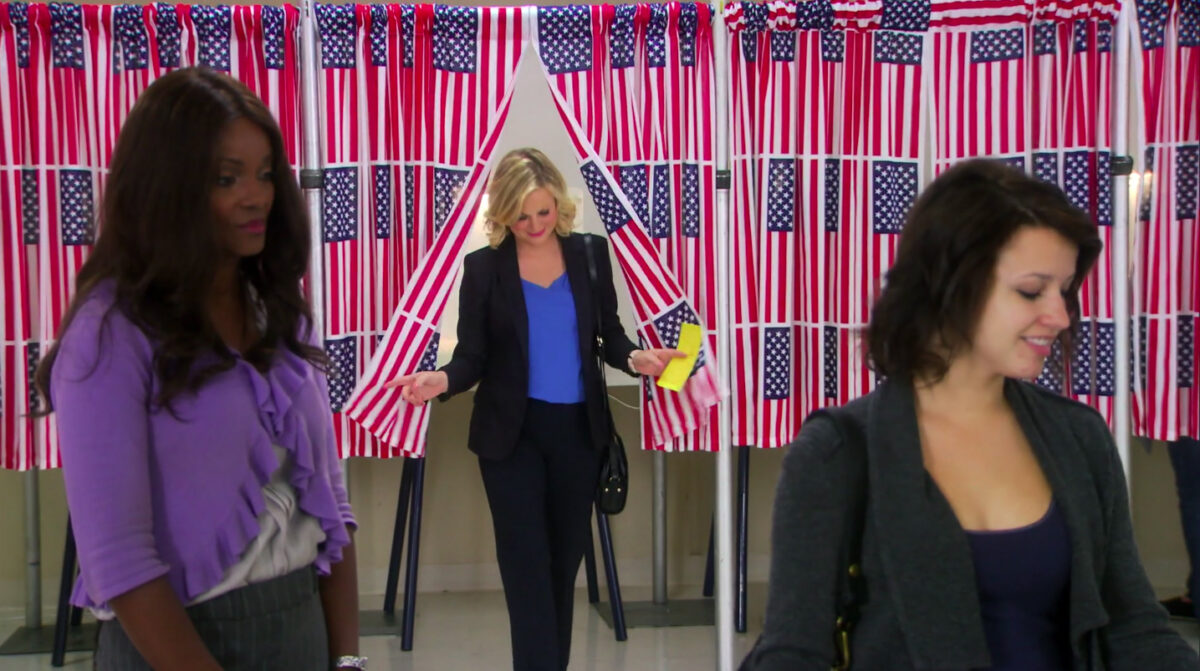 I have a mask that says “Leslie Knope would have had a binder for this,” and that’s the one I chose to wear while voting in the 2020 election. It both delights me and makes me sad because Leslie Knope is honestly who this country needs right now, but the problem is that she’s a perfect fictional character created by Mike Schur and Greg Daniels for Parks and Recreation.

I often find myself looking to Leslie Knope, and her determination to do the right thing and be there for the American people, as a guide because, at the end of the day, Leslie is the only one who never really gave up on Pawnee. Even when they wanted her to stop caring, she wouldn’t. Even when she was beaten down and recalled from City Council, she fought through it and did what she thought was best for her hometown.

Part of my happiness in wearing that mask to vote came from thinking about Leslie Knope voting for Joe Biden. You know that Ben Wyatt would have to remind her that they know Joe, or maybe this was before they got close enough to go to Joe Biden’s game nights. But still, she’d happily vote for Joe Biden because I truly do think that Leslie Knope would have suffered these last 4 years.

I’m not going to say the 2016 election hit me hard because of a fictional character. I’m an adult woman. But I do sometimes think about how different Parks and Recreation would be if it had still been on the air from 2016 on. I think about what it taught me and how I started to understand politics on a different level while watching it.

There is a saying that I have loved for quite a while: “Be the Leslie Knope of whatever you do.” I love it because it isn’t just about politics. It’s about caring. Leslie Knope, at her core, cared too much—which isn’t a bad thing. She wanted the world to be better, she wanted her friends to be happy, and she wanted to look out for everyone around her.

Taking that energy into the 2020 election felt necessary. I needed to have Leslie’s determination and will to get through this. I needed to focus my energy on those who are in danger in this upcoming election. I needed to be the Leslie Knope I wanted to see in this world, and so I wore my fun little mask to the polls to vote and felt a sense of relief (quickly followed by election dread) at casting my vote.

Is being emotional about voting in a mask from Parks and Recreation something that 2020 has caused? Most definitely. But it is the closest I’ve ever felt like to a fictional character I love with my whole heart. So, voting for Joe Biden and Kamala Harris in my Leslie Knope mask gave me 5 minutes of not feeling extremely anxious, and I’m going to take that as a win.