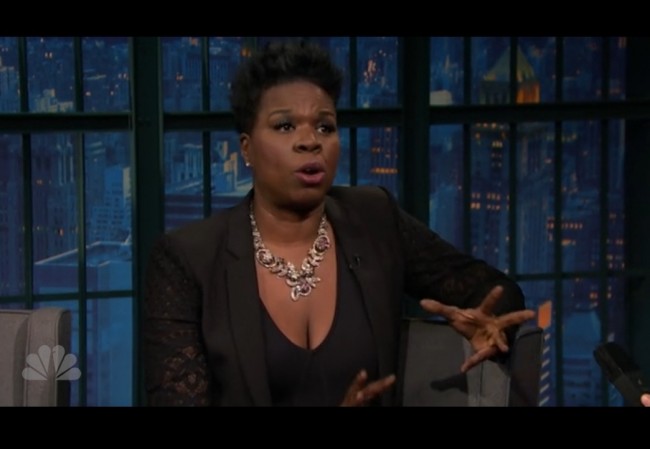 Because it wasn’t enough for people to fling racist and sexist tweets at Leslie Jones via Twitter as Ghostbusters opened. Now, someone has managed to not only hack her website, but they’ve obtained personal information and private photos, flooding the site with them. What the hell is wrong with you, Internet? Oh, racism and sexism. Right. That’s what’s wrong with you.

As reported by the NY Daily News, earlier this morning Leslie Jones’ website was hacked. The as-yet-unknown hackers not only loaded private nude photos of Jones onto the site, but also images of her driver’s license and passport, revealing her personal information. In a bit of added racism (because targeting her to the exclusion of her fellow Ghostbusters stars wasn’t obvious enough), a picture of Harambe (the gorilla shot at a Cincinnati zoo this summer) was posted to the top of the site.

The FBI is currently investigating, and an FBI spokesperson said that they were “aware” what happened to Jones’ site and are currently “assessing the situation.” Meanwhile, Jones’ site was taken down.

Jones has plenty of supporters who are speaking out against the actions of this unknown hacker:

these acts against leslie jones….are sickening. its racist & sexist. it’s disgusting. this is hate crimes. this aint “kids joshing round”

What’s happening to @Lesdoggg is an absolute outrage. Alt right, haters, trolls, “comedians,” whoever the fuck you all are, you’re just sad.

However, there are those who ride on the coattails of incidents like this in a desperate attempt to keep their claws dug into Relevance. Case in point: Milo Yiannopoulis, the incendiary Conservative blogger who inspired the original attacks against Jones on Twitter in the first place. Since he’s been permanently banned from Twitter, he’s taken himself to Snapchat where he can continue his obnoxious forays into instigating conflicts. There, he posted a photo of himself with the caption “Karma’s a bitch,” then a minute later, posted a photo saying “Shit just heard about Leslie Jones. Had no idea!!! Ignore that karma thing lol.”

Later, Yiannopooulis responded in a more serious way. According to Death and Taxes, he issued a formal statement on his Facebook page, saying:

“I’m distressed to hear that Leslie Jones has been hacked and naked pictures of her have been posted online. I know we had our differences after my review of Ghostbusters, but I wish her all the best at what must be a deeply upsetting time.”

It’s very interesting how he “lol’d” on Snapchat (where posts aren’t permanent), but posted a more acceptable response on Facebook. Interesting that he thought it’d be necessary for him to respond at all

Here’s the thing, we’re not talking about Jennifer Lawrence right now. Second, if the Harambe picture didn’t give away the racism, the fact that Jones is the only Ghostbusters cast member dealing with this nonsense should. And third, what happened to Lawrence was sexist. It is also sexist that it’s happening to Jones. This kind of thing doesn’t generally happen to male celebrities, whether they are of color or not. It’s women who are targeted by things like this, because 1) their bodies are thought to be public property, and 2) they can be made to feel more unsafe by revealing their information and photos, because they are generally more unsafe in the world. Hacks like this against women online could very easily have real-life consequences for them.

But people like Milo Yiannopoulis don’t care about the way their actions affect the lives of others. They only care about eyeballs on them, to hell with the fallout. Except…the fallout is important. The fallout is the real world. The fallout will still be there even after the Internet stops Internetting.

As of right now, there’s no news about who might have been responsible, but we will keep you posted as the story develops.