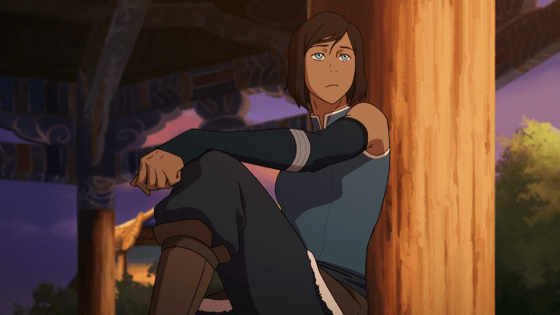 My dear readers. I regret to inform you that I am not doing a favorites slide show this week. You see, I’m a little ticked off. Before we talk about anything, I need to preface this episode with a little explanation from our dear Bryan Konietzko:

Sometime around a year and a half ago we were similarly duped on a large scale. We got the news from the higher-ups that our Book 4 budget was getting slashed, almost to the tune of an entire episode’s budget. We had two options: 1) let go a significant number of crew members several weeks early, or 2) make a clips episode. We never considered the first option. We weren’t going to do that to our crew, and even if we were callous enough to do so, we never would have been able to finish the season without them.

So having watched this episode, and knowing full well a choice creators Bryan Konietzko and Mike DiMartino had to make, I want the world to know I support the decision the creators went with. Putting people before your art can be really hard, especially when it’s a project you’re passionate about. I have been there when I worked in animation, and with my own comic project now. I know what that’s like, it’s always a tough call, but people matter more. Bryan and Mike you made the right choice. I do not blame you. You did the best you could with what you had. This was not your fault. It’s frankly impressive that you were able to do what you did. Good for you, and I look forward to the next few episodes!

Now, Nickelodeon I have some choice words for you.

Let’s look at some of the facts here:

Look, Nick. I get it. I do. Animation is a business as much as it’s an art. You have to make money to stay in business. It’s a ridiculous balancing act between getting cash only to spend it creating more work, advertising, paying your staff of thousands, etc. I’ll grant that’s a gross over simplification, but that’s the art of the animation biz  – make money so you can make more art.

However, my problem with you is – you’re not trying for Korra. You’re not going up to bat for my girl or her team, and I’m frankly ticked off about it. You’ve rescheduled her. You’ve lost viewership in an age of DVR and viewers watching online (something you expected and still somehow punished her for). Episodes from her third season get leaked and you freak out. You release too many episodes at once with next to no time for advertising. Then, you pull her down with no notice or explanation. Then somewhere in that fuck-nado you cut Korra’s budget so the team has one less episode to tell her story. We have to devote an entire episode to this clip BS because you don’t know what to do with her.

If this episode proved anything it’s you don’t know what to do with Korra. I have been to your sponsored industry mixers at festivals, I have met your executive staff, I have chatted with many of them, and while you are all “so proud” of Korra, you have no idea what to do with her. I will grant you this: She’s not your normal fare, but damnit why can’t you own that? You’re a business run by some of the most creative people in the world. Get creative! This is a problem you could have fixed!

You have a market, Nick. You have fans who are so desperate for merch they’ve started creating their own t-shirts, action figures, packaging and games – I mean really you can’t even release a physical Pai Sho game? My little brother loves Korra. He adores her. He wanted a toy, an action figure precisely, of Korra one Christmas and I was determined to find him one. So I head to Nick.com, click on the store for Korra and do you know what I found? Mousepads. No, really. Mousepads. Out of the handful of good merch (two plushies, the soundtrack and an art book), you had nothing my little brother could play with outside of mousepads, mugs, stickers and some decorative skateboards. This still hasn’t changed. You haven’t bothered making toys. You haven’t bothered to make relevant merchandise for a generation of kids who use tablets and phones. Oh, but you did make a video game! How did that go? Not well.

“We made you game, but we forgot to make it fun.”

Nick, I’m just sick and tired of this. You’ve got a great show, with a stellar cast, award winning artists, some of the most passionate fans in animation and you didn’t even step up to the plate. You didn’t support your team. You have dragged Korra through the mud at almost every turn since season one and all you can say for yourself is, “We’re taking the show to digital distribution,” and, “Korra doesn’t match our normal lineup.” No. Those aren’t explanations. Those are excuses. You don’t do that to your workers. You don’t screw around with their jobs and then force their hand to make sub par work or fire their teammates (that they can’t lose because then the show wouldn’t get done). You don’t get to play that game and walk away scot-free without any blame. You are not going to walk away from this and leave the blame on Bryke and their crew. This is your fault Nick. You put them in that situation, and I am so disappointed in you.

Feel free to talk about the episode and your favorite moments in the comments, ya’ll. Let’s hope next week is better.

UPDATE [11/24 12:57pm ET]: This morning Nickelodeon announced that they’ll be putting The Legend of Korra back on television again. Click here to find out more!

By day, Carrie is the co-creator, artist, and production coordinator for the webcomic Kamikaze . By night she’s a writer, budding comic nerd, and passionate feminist. Feel free to follow her on Twitter.