This Bridge Called My Back: The Legacy of Recy Taylor | The Mary Sue

This Bridge Called My Back: The Legacy of Recy Taylor 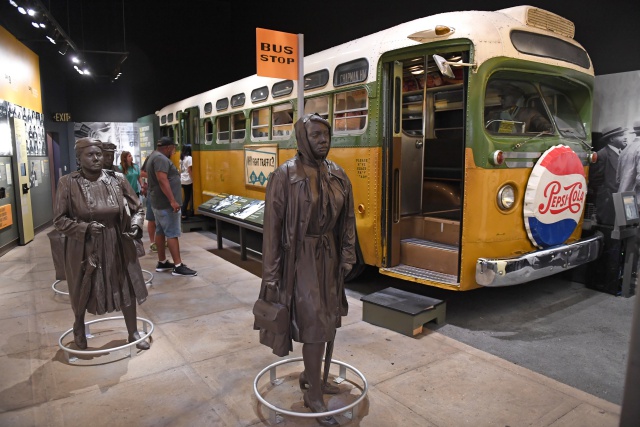 Bus display at Rosa Parks exhibit as part of the National Civil Rights Museum and the site of the Assassination of Dr. Martin Luther King Jr.

Oprah used her opportunity last night to pay tribute to those who have come before her in entertainment milestones, like Sidney Poiter the first black man to win an Oscar. However, she also brought up a name many people might not have heard of before, Recy Taylor.

As someone who has written about race and history academically, I was familiar with the name from the incredible book At The Dark End of the Street: Black Women, Rape, and Resistance—a New History of the Civil Rights Movement from Rosa Parks to the Rise of Black Power by Danielle L. McGuire. The title is a mouthful, yes, but the content of the book is groundbreaking in terms of what it exposes about the black female body in the Jim Crow era.

We hear about the sexual abuse and rape that female slaves went through, yet the law still did not treat black women with respect. Not for their bodies and no for their souls and the story of Recy Taylor was instrumental in laying the foundation for the Civil Rights Movement.

As Oprah said in her speech, Recy Taylor was a 24-year-old mother who on her way back from church, was abducted by six men raped, blindfolded, and threatened with death if she’d even spoke up. What happened to Recy Taylor was not rare or unusual in the Jim Crow Era. White men would lure black woman from homes promising them jobs and steady wages, abducted them at gunpoint while they were walking to home, work, church and raped or sexually humiliated.

Meanwhile, black men were frequently lynched for allegedly raping white women. The mythology surrounding black men was that they had an irrational thirst for white women. According to McGuire “Between 1880 and 1920, Southern Democrats fueled rumors of ‘black beast rapists’ defiling pure, white womanhood” and that integration and equal rights were just a front to gain white wives.

“Negro Men were all plannning to have white wives,” whites whispered to one another in wartime North Carolina. “And when all the white men have gone to war,” they said, “the white women will be left for the Negro men.” Another tall tale traded among friends in Georgia told of a black man who warned a white couple that they “better be necking now because after the war we’ll be doing the necking.” In Louisiana whites warned schoolgirls to never walk alone since there was apparently an “outbreak of Negroes attacking white women.” (McGuire, 26).

The catalyst of many race riots were unsubstantiated rumors of black men attacking white women. In 1943, a white woman claimed she was attacked by a black man and more than 2,000 white men invaded the black neighborhood: beating people, burning business leaving hundreds injured, three dead and destroyed two hundred buildings. Meanwhile, the reverse–white men raping black girls with actual evidence of the crime–led to nothing. It wasn’t until Betty Jean Owens in 1959 that white men were given life sentences for their crimes in Florida.

During the 40s, NAACP chapters were flooded with reports of sexual violence against black women. Violence against women was common and they were equally subjected to the cruelty of lynching as were children (see the Lynching of Laura and L. D. Nelson). The cult of womanhood and purity that was projected onto white women did not apply to the Negro.

When Recy Taylor went to the police and the public with her story, in spite of the threats, there was outrage in the black community who asked for justice. The NAACP sent down their best investigator and activist against sexual assaults on black women, Rosa Parks. Parks and her allies formed the Alabama Committee for Equal Justice for Taylor, “with support from national labor unions, African-American organizations, and women’s groups.” The response was incredible for the time with hundreds of letters protesting the rape landing on the desk of  Chauncey Sparks, Governor of Alabama. One letter even managed to make a racial purity argument as to white Sparks should encourage the prosecution of those men.

You are justly and earnestly striving for the purity of your race, yet you openly permit a great many of your men to freely cohabit with women of the Negro race. This is encouraged by your laws. Ironically enough, the Negro man does not seem as desirous of cohabitation with the white woman as the white man is pleased with cohabiting with Negro women…The failure to indict the white men {who assaulted Recy Taylor} says to the white youth of the South that it is alright to have sexual intercourse with the Negro…{The rapists} in Abbeville Albama…have made your lofty and nble principles of race and good clean society a joke. (McGuire, 24).

The letter is signed a “friend of the South” but I’m like 95% sure that this a black person trolling. Regardless, the committee recruited supporters across the entire country and by the spring of 1945 they had organized the “strongest campaign for equal justice to be seen in a decade.”

Despite that, it did not lead to justice. During the first trial, none of the six men who raped Taylor was arrested even though their identities were known: Dillard York, Billy Howerton, Herbert Lovett, Luther Lee, Joe Culpepper and Robert Gamble. Because of that, the only witnesses were Taylor’s family and they could not identify her assailant and because they’d never “arranged a police line-up, Taylor could not identify her attackers in court.”

As a result, after five minutes of deliberation, the all-white, all-male jury dismissed the case. The black community was outraged and to appease them, an investigation was called and eventually, a second grand jury hearing took place. This time the officers did their jobs and obtained statements from the suspect, Culpepper’s admission of coercion and three eyewitness affidavits. Yet, the all-white, all-male jurors refused to issue an indictment. Meanwhile, the news coverage from white publications slandered Taylor arguing that she was a prostitute and wanted to just put the story to bed.

Recy Taylor did not get justice for what happened to her, but what she helped cultivate through the Committee for Equal Justice laid the foundation for the Civil Rights movement and kept them in place until Rosa Parks herself took the center stage during the bus boycotts of Montgomery.

Taylor’s refusal to remain silent helped expose a ritual of rape in existence since slavery, inspired a nationwide campaign to defend black women, and gave hope to thousands suffering through similar abuses. Becsause of the campaign for equal justice for Recy Taylor, sexual violence and interracial rape became the battleground upon which African Amerivan sought to destroy white supremacy and gain personal and political autonomy. That battleground is where the modern civil rights movement began, though its roots were as deep as the Atlantic slave trade. (McGuire, 47).

In 2011, after the publishing of McGuire’s book and more attention now be brought back to Recy Taylor’s story the mayor of Abbeville and from the county and state governments issued a formal apology for what their government had twice failed to do. She died at 97-years-old December 28th, 2017. It will never erase the brutality that was done to her or the fact that her home was firebombed or that a man named Benny Corbitt stood guard in a tree every night with a gun guarding Taylor and her family until daybreak to protect their lives. Still, Taylor would never be silent and because of her, we could eventually have justice for other black women.

I am very glad that Oprah used her moment to bring attention to Recy Taylor’s story because the story of black people and black women during the Jim Crow era is horrifically brutal. Her story is one that deserves to be known and taught. Remember Recy Taylor and say her name.