How Not to Overthink Your Decision to Learn Japanese 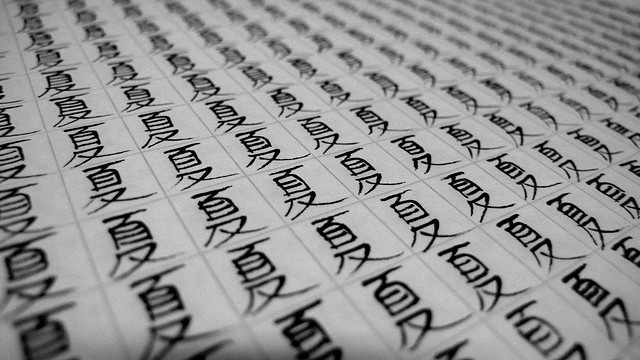 So, you’re finally taking the big step. You’ve seen the occasional words or titles in anime or games, and now you want to dive into the “real” stuff.

You want to learn Japanese.

There are plenty of resources to do so. Associations like the Japan Society offer classes, and there are a wealth of online opportunities both beneficial and questionable. But dealing with a Japanese class can sometimes send fans, especially older ones, into a frenzy of fandom-fueled panic.

They want to be taken seriously. So they ask questions like, “Should I take my pins off of my favorite messenger bag or backpack? Speaking of backpacks, is the Survey Corps backpack a no-go? What about my cell phone charms? Do I need to learn kana first—will other students there think I’m silly if I don’t already know it?”

In addition to these questions are others, lurking underneath the surface. The nightmares of becoming the eldritch shambling horror of the Actually Ridiculous Fan Stereotype who haunts other fans’ nightmares with, “Actually, the real meaning is…” or “OMG kawaii!!” The fears of cultural appropriation, of assuming a meaning that isn’t there. The fears of multiple writing systems to deal with and doubts of ever having a conversation in Japanese. Of any length.

First, calm down. Breathe. Continued breathing is good for your health.

Once you’re reasonably relaxed, I have three pieces of information for you:

Learning doesn’t make you a weeaboo.

No matter your reasons are for learning a language, making it part of your daily life helps you learn it. So what if you are a fan of anime or manga or Japanese dramas?

It’s the same rationale behind classes putting up sticky notes on blackboards or windows with the words for “the blackboard” or “the window” on them. It’s something you can relate to, something you see in school life.

It’s also why people learn phrases like, “How are you?” a bit more easily than isolated words like “airplane” or “alchemy.” Greetings can be used right away. Same with words like, “Thanks.” It sticks. I remember when I was first learning Spanish and the teacher taught us our first words: “No sé” = “I don’t know.” That way, even if we didn’t know the answer, we could at least respond in Spanish.

If you are a fan of something Japanese, be it anime or martial arts, you have a place or context to use the Japanese you learn right away. Learning a language does not automatically lessen your reputation. It’s just that with Japanese, people scrutinize other people’s reasons for learning it. And this leads me into the next point.

It doesn’t matter what other people think.

Most American learners are used to two languages being offered in classes: Spanish and French. Often, the reason for learning them is a simple “my school required one or the other,” so we don’t think much about our reasons or what others might assume of us. When I first started learning Japanese, I admit I was listening to songs from Yu Yu Hakusho, trying to do my own translations of the song “Nightmare.” I was reading about the puns in Sailor Moon.

Did I get defensive? Yes.

Did I feel ridiculous? Still do, in fact.

But the trick to language learning is to not let that stop you.

It’s hard. But how do you get better at anything? You keep doing it. You might mess up, but you get back up and learn and do it all over again.

And now I can say that I can greet people in more than one language. I can have a conversation, even if it’s still a bit awkward and embarrassing, in a language other than English.

You’re not the only one.

If you’re in a Japanese class, chances are other fans will be there too.

If someone does makes fun of you for your fandoms, you can always say that you’re studying the Japanese language because you want to learn more. Yes, you’re a fan. But learning Japanese might help with other things as well.

For example, understanding translation choices. Puns. Talking about electronics in DenDen Town or Akihabara, as well as apologizing that you don’t know Japanese fluently. Or asking a friend about their ikebana class, or if you should check out that new karaoke place down the street.

Let me tell you a story.

In November 2013, I spent an evening speaking with my friends in English. My voice does not have a noticeable accent, even here in the city. To another American, I have no accent. I realize I might need to look at Japanese-style résumé templates (which are different than American-style ones), and so I stop in at Kinokuniya. It is the night before the Japanese Language Proficiency Test, and I am hearing English and Japanese spoken from many different people: different accents and dialects all over the place.

Hesitantly, I go to the information desk. I am white, I am very conscious of my weight, I have blue hair—I knew those things obviously, but here, in a Japanese bookstore, I worry how I will be seen and how I will sound. My language is not expected. I am taking too much time looking at pens and study books and fiction titles. I fear I will stand out too much. I fear I will be misunderstood, even though I have spent many years studying, even though I hardly speak in Japanese and my speaking is rusty. The forms have their own word— “rirekisho.” I have always had a problem with ‘r’ sounds in any language. I stutter.
I clear my throat anyway. And speak.

“<…Excuse me, but do you have personal history resume forms here?>”

The clerk looks up. “<Personal history forms? Japanese-style ones?>”

“<Yes, they are in the stationery section over there. If you are applying to a job, I wish you good luck.>”

All of these fears, and it went more smoothly than expected. I was able to talk with someone and get what I needed.

Yes, I may have sounded awkward. Or used language in unexpected ways. But in the end, I accomplished my goal. I now translate written works, I now do panels, I now teach every now and then. Learning Japanese was difficult at times, but I hope that new learners to Japanese will keep going and never give up.

Hopefully this article has helped ease your fears about learning Japanese. But where to go from here?

Moekana is a good way to start learning the kana syllabary (hiragana and katakana). After all, once you have learned the kana, you can “sound out” how kanji—the characters borrowed from Chinese characters over time, much like how English uses roots from Latin or Greek—are pronounced. So even if you do not know the word, you can know how to spell it and can look it up to add to your vocabulary.

— This book promises help in learning Japanese, and it does not disappoint! It helps all learners, from beginners to advanced students, play with the language and learn more naturally. It also includes short manga pieces to help with the ever-important context!

Fluent in 3 Months: How Anyone at Any Age Can Learn to Speak Any Language from Anywhere in the World

(Also available in Kindle and Audible editions) — Benny Lewis describes his ways to learn languages via different methods. He also discusses free/low-cost ways of language learning which can be applied to different languages (not just Japanese), because many folks think it takes an expensive online or university course to “truly” know a language. While these courses may help, they are not required, and not being able to take one should not hold you back.

Influent is a language learning game, available on the Steam platform, that helps build vocabulary and is the price of a paperback book! For those who are visual learners or need the audio to help them get used to the sounds of Japanese, this is a low-cost way to practice. (Other languages besides Japanese are available as well.) For more advanced students, this game’s user interface can be set to Japanese as well.

I hope that gets you started! Remember:
頑張り続きてねよ。（がんばりつづきてねよ。） Keep going and do your best.

Kit Paige also writes at Study of Anime. The original version of the above article was originally published in Otaku Journalist. It has been reposted with permission.