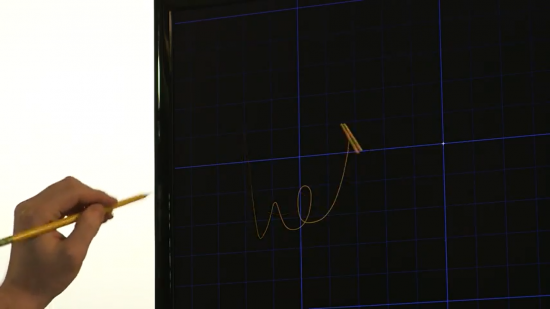 At the moment, the Kinect is pretty much the standard for motion control, and while it can boast a pretty impressive market penetration thanks to being bundled with the Xbox, it often leaves a little something to be desired. By endeavoring to recognize the whole human body at a distance, the Kinect has a lot of challenges to overcome, and can be a little bit janky as a result. The Leap controller, a different kind of gesture control designed for use with Mac and PC, takes the technology in a completely different — and stunningly accurate — direction.

Produced by the appropriately named Leap Motion, the Leap controller is a tiny USB-connected box that sits in front of your computer monitor. From there, it watches your hands intensely and claims to be able to monitor your finger movements in fractions of millimeters. Unlike the Kinect which is (artifically) limited to only parsing the movements of your body, the Leap can also get input from objects you hold, allowing you to use a pen, or who knows what else.

Your initial reaction might be “Wow, this is way better than Kinect!” Mine was something similar. That’s pretty inaccurate, though. This is way different from Kinect. It’s able to gain that extra fidelity not by being “better,” so to speak, but by having a radically smaller scope than Kinect, and by requiring a much closer range.  Where its real potential lies, practically, is probably in making it easier and more natural to manipulate virtual objects in a 3D space, something that’s historically been a bit difficult. The gaming implications, while not quite mouse and keyboard, seem like a cool gimmick though.

Of course, how successful the Leap controller is ultimately depends on how many developers are willing to bake-in Leap compatibility or find some kind of useful, unique application for the device. Luckily enough, the controller is pretty reasonably priced, retailing for $70 and currently available for pre-order, so getting them in front of people shouldn’t prove too difficult. All in all, the Leap controller seems pretty genuinely interesting. It looks like it’d be tiring on the arms, and difficult for use with laptops, but gesture control of that accuracy could be used for some pretty cool things. We’ll have to wait and see if it actually is.

Here’s an extended demo of the tech.